The psychological toll COVID-19 may be taking on Americans. Health experts are concerned about the potential mental health effects of the coronavirus outbreak in the United States, and mental health hotlines report a substantial uptick in calls since the outbreak began. 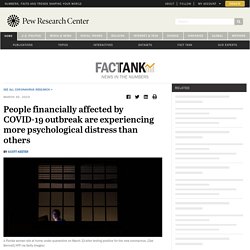 Nearly one-in-five U.S. adults (18%) say they have had a physical reaction at least some or a little of the time when thinking about the outbreak, according to a new Pew Research Center survey conducted March 19-24. This is particularly true of those affected financially. When asked more broadly how they’ve felt in the past seven days, not in the context of the coronavirus outbreak, 18% report experiencing nervousness or anxiety most or all of the time during the past week. For context, a 2018 federal survey – which was not taken in the midst of a national crisis – found 9% of U.S. adults reported feeling nervous most or all of time over the past 30 days, indicating that the current level might be above normal. Scott Keeteris a senior survey advisor at Pew Research Center. The Importance, and Incoherence, of Twitter’s Trump Ban. Let’s take the easy question first. 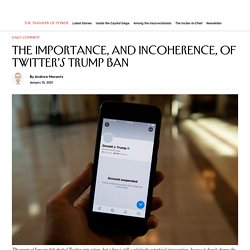 Nothing in the Constitution prohibits a private company from enforcing its own policies; if anything, the First Amendment protects a company’s right to do so. Now the harder questions. Does censoring a head of state set a dangerous precedent? Yes, it does, but so does allowing a head of state to use a platform’s enormous power, over the course of several years, to dehumanize women, inflame racist paranoia, flirt with nuclear war, and incite armed sedition, often in flagrant violation of the company’s rules.

Is it worrisome that Jack Dorsey, a weirdly laconic billionaire with a castaway beard who has never been elected to any public office, is able to make unilateral, unaccountable decisions that may help determine whether our country survives or self-immolates? The suppression of speech we despise can lead down a slippery slope toward the suppression of speech we cherish; indeed, it almost always does. Andrew Marantz: Inside the bizarre world of internet trolls and propagandists. EdWebET110 - Feelings are not Facts - Google Slides. Civic Online Reasoning.

If young people are not prepared to critically evaluate the information that bombards them online, they are apt to be duped by false claims and misleading arguments. To help teachers address these critical skills, we’ve developed assessments of civic online reasoning—the ability to judge the credibility of digital information about social and political issues. These assessments ask students to reason about online content. We’ve designed paper-and-pencil tasks as well as tasks that students complete online. These assessments are intended for flexible classroom use. We hope teachers use the tasks to design classroom activities, as the basis for discussions about digital content, and as formative assessments to learn more about students’ progress as they learn to evaluate online information.

As part of MediaWise, the Stanford History Education Group is developing and evaluating new civic online reasoning lesson plans for middle and high school students. 3D Scan Real Objects with Qlone and 3D Print Them with i.materialise. 3 (almost) Free 3D Scanning Apps that don't need extra hardware in 2018. So it’s 2018 and you’re looking for free photogrammetry software for your smartphone to take your first steps into 3D Reality Capture without paying a penny? 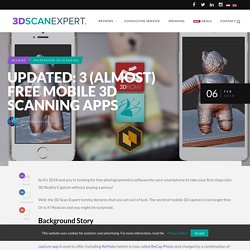 Well, the 3D Scan Expert hereby declares that you are out of luck. The world of mobile 3D capture is no longer free. Or is it? Read on and you might be surprised. Background Story I originally published this popular post on June 30, 2016 when you could use 123D Catch on every mobile platform. Also gone is the web-based ReCap 360 interface (that even worked on Android). This post originally also contained the Seene app.

Meanwhile, Sony introduced a nice free 3D capture app called 3D Creator but that is strictly exclusive to recent Xperia phones (I know exactly zero people that have one). The (almost) Free Mobile Photogrammetry Solutions of 2018 Okay, you probably Googled “Free 3D Scanning Apps” and I can’t give you exactly that. About the Sustainable Development Goals - United Nations Sustainable Development. Stories & Lesson Plans.