Sofusbofus comments on How do I convince a co-worker (who says he used to have a job coding and modding games) that you don't need to spend $10,000 bucks on a gaming rig to get 60fps 1080? Sumopaint.com. What is a Web Developer? A web developer is a software programmer who is focused on developing sites and applications for the World Wide Web. 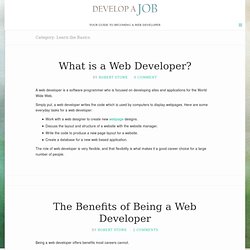 Simply put, a web developer writes the code which is used by computers to display webpages. Here are some everyday tasks for a web developer: Work with a web designer to create new webpage designs.Discuss the layout and structure of a website with the website manager.Write the code to produce a new page layout for a website.Create a database for a new web based application. The role of web developer is very flexible, and that flexibility is what makes it a good career choice for a large number of people. What’s new for designers, January 2014. The January edition of what’s new for web designers and developers includes new web apps, jQuery plugins and JavaScript resources, web development tools, responsive design resources, collaboration tools, coding resources, and some really great new fonts.

Many of the resources below are free or very low cost, and are sure to be useful to a lot of designers and developers out there. As always, if we’ve missed something you think should have been included, please let us know in the comments. And if you have an app or other resource you’d like to see included next month, tweet it to @cameron_chapman for consideration. Duo Duo is a web browser that lets you view both mobile and desktop versions of responsive websites you’re designing. TimeTracker TimeTracker is a software-integrated time tracking app that offers automatic time capture, real-time analytics, and more. Coment.me Coment.me makes it incredibly easy to comment or otherwise provide feedback on any URL. Adaptive Backgrounds Layrs Control. Most Viewed Photoshop Tutorials.

Under Articles Under Photo Effect, Photoshop Tutorial In this tutorial, it will show you how to turn a photo into a beautiful paint. 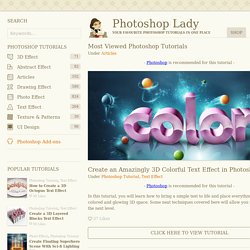 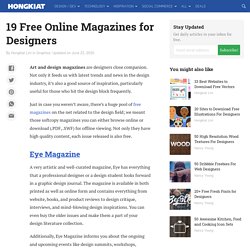 Not only it feeds us with latest trends and news in the design industry, it’s also a good source of inspiration, particularly useful for those who hit the design block frequently. Just in case you weren’t aware, there’s a huge pool of free design magazines on the net; we meant those softcopy magazines you can either browse online or download (.PDF, .SWF) for offline viewing. Not only they have high quality content, each issue released is also free. We thought that’s generous of these folks. Today we want to present you with N Free Magazines for Designers. More? Our Top Picks GizMag Weekly web magazine full of neat stuff. Startups, This Is How Design Works.

SculptGL - A WebGL sculpting app. HandBrake. CSS3 Text Shadow. Ethical Hacking Tutorials. The Best Fifty Web Sites You Don't Know About. 20 Great Sites to Learn the Ins and Outs of Video Game Design. The 50 Free Apps We're Most Thankful For. Browsers List. Top 10 Things You Can Upgrade with a Little Electronics Hacking. It is a skill to do a good solder joint, it comes with LOTS of practice. so most people who rarely do it will ever get good at it. 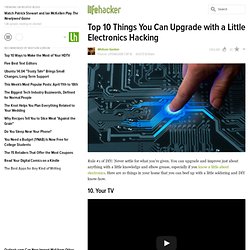 Bingo. Of course, part of the issue is having a soldering iron at the right temp with a properly tinned tip. Newbies aren't using soldering stations but a cheap iron they got at rat shack (You have questions? We have deer-in-the-headlights... erm... answers!). I don't expect to ever master tricky stuff like smts or even multilayer pcbs so I'm not much better then a newbie, anyway - and I totally suck at sweating pipe joints. Ah, well... SMT is actually a bit better than through-hole once you get the hang of it.