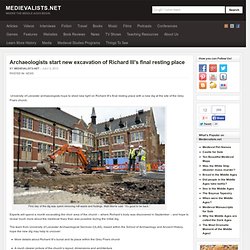 First day of the dig was spent removing mill waste and footings. Matt Morris said: “It’s good to be back.” Peasant houses in Midland England: How the Black Death prompted a building boom. It used to be thought that only high-class houses had survived from the Medieval period. Radiocarbon and tree-ring dating has now revealed that thousands of ordinary Medieval homes are still standing in the English Midlands, many now incorporated into des res village homes.

Chris Catling reports on how some peasants lived very well in the Middle Ages. The term ‘peasant’ suggests poverty, ignorance, missing teeth and poor personal hygiene: Baldrick stuff, all threadbare rags, hunched shoulders and a life shared with pigs in a squalid hovel barely adequate to keep out the bitter winter wind. In fact, all that ‘peasant’ really means is that you live mainly off the produce of your own labour. Many a modern allotment holder leads a semi-peasant lifestyle, and there are plenty of contemporary peasants all over southern and Eastern Europe – not to mention those living in hippy communes in west Wales. Scale models: George and the dragon. Apr 23, 2013 News 0 Image courtesy of the Portable Antiquities Scheme Standing just 4cm high, St George raises his lance to strike a fatal blow against the tiny dragon staring back at him. His outstretched hand probably once gripped his scaly foe by the tail, though they have since broken apart.

Discovered by a metal detectorist in the Carlisle area last April, these silver gilt figures were handed in to the Portable Antiquities Scheme and are now being valued under the Treasure Act. George’s full-plate armour and the plate mitts protecting his hands are characteristic of the 15th century, and a small loop on his back suggests that the figures were once intended to be attached to fabric. Stuart Noon, Finds Liaison Officer for Lancashire and Cumbria, believes the pair might have had a more chivalrous owner, however. ‘It’s a really unusual piece, incredibly detailed for something of this size – it really is a work of art,’ he said. From Dante to Dan Brown: 10 things about Hell. Da Vinci Code author Dan Brown's new book borrows its title and theme from Dante's Inferno, an account of the Italian poet's imagined journey through hell. 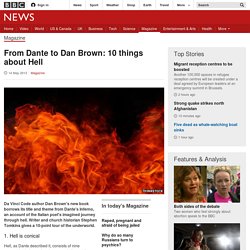 Writer and church historian Stephen Tomkins gives a 10-point tour of the underworld. 1. Hell is conical Hell, as Dante described it, consists of nine concentric circles, going deeper each time as they get smaller, towards the centre of the Earth. Which of the nine you are condemned to depends on your sin, with circles devoted to gluttons, heretics and fraudsters. 2. The modern cartoon image of Hell, with flames and pitchforks for everyone, is tragically bland compared with medieval depictions. 3. 'Medieval knight' unearthed in Edinburgh car park dig. 13 March 2013Last updated at 10:09 ET The grave stone is marked with a cross and and ornate sword - signifying a knight or nobleman The remains of a medieval knight or nobleman found underneath a car park are to be moved to make way for a university building. 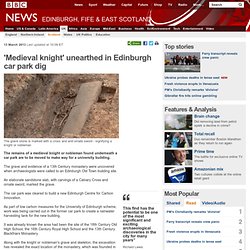 The grave and evidence of a 13th Century monastery were uncovered when archaeologists were called to an Edinburgh Old Town building site. An elaborate sandstone slab, with carvings of a Calvary Cross and ornate sword, marked the grave. Science & The Catholic Church: A Tumultuous History From Galileo To Stem Cells. By: Tanya Lewis, LiveScience Staff Writer Published: 03/11/2013 11:36 PM EDT on LiveScience Science and the Catholic Church share a long and sometimes tumultuous history. 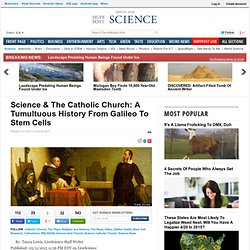 As the church leaders gather for the start of conclave Tuesday (Mar. 12), their choice of a new holy leader will affect Catholic views on science in the coming decades, say scientists. The Catholic Church has come a long way from its inauspicious treatment of Galileo Galilei in the 17th century. It now recognizes a theistic form of both cosmic and biological evolution. But the church remains steadfastly opposed to contraception, abortion and research using human embryonic stem cells. "The natural sciences are in a steady search for truth, and so is theology," retired molecular geneticist and Nobel laureate Werner Arber told LiveScience. 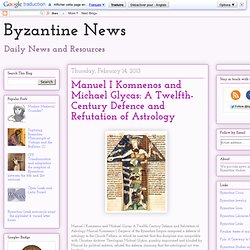 Theologian Michael Glykas, possibly imprisoned and blinded by Manuel for political sedition, refuted this defence, claiming that the astrological art was heretical. Historia Brittonum. 10 Medieval Weapons that Changed the Face of Warfare. Richard III's Face Reconstructed From English King's Skull. Now that Richard III's remains have been identified "beyond a reasonable doubt," scientists are trying to figure out what the English king looked like. 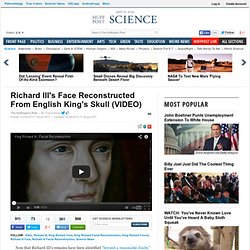 Richard III: Academic mimics voice of last Plantagenet. 8 February 2013Last updated at 09:55 ET Dr Philip Shaw analysed two letters written by 15th Century king of England An academic has recorded what he thinks could be the accent of Richard III - and was surprised to realise he may have talked with a West Midlands twang. 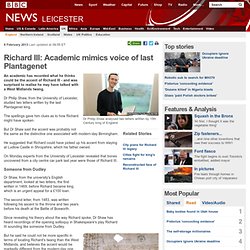 Dr Philip Shaw, from the University of Leicester, studied two letters written by the last Plantagenet king. A king's final hours, told by his mortal remains. History and literature have painted England’s King Richard III as a scoundrel who met a violent death in battle and was unceremoniously buried. 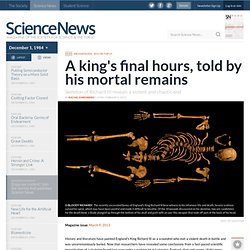 Now that researchers have revealed some conclusions from a fast-paced scientific investigation of a skeleton found last year under a parking lot in Leicester, England, that end seems all the more gruesome. The results announced February 4 by a team from the University of Leicester paint a picture that is remarkably consistent with both historical and fictional accounts. The search for the king’s body began in August 2012, in the parking lot of a Leicester city council building. An excavation there uncovered walls and other structures of Grey Friars church, where Richard III was buried after his ignominious death on August 22, 1485, in the Battle of Bosworth. Who, What, Why: What is the method for reconstructing Richard III's face? 6 February 2013Last updated at 06:23 ET. 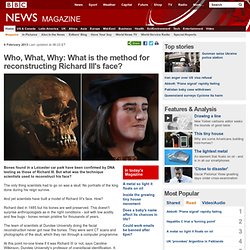 Richard III's Skeleton Found in Parking Lot. Ending months of speculation, a team of scientists at the University of Leicester in the United Kingdom has concluded "beyond reasonable doubt" that human remains found in a parking lot in the city last year are those of Richard III, who reigned over England from 1483 until his death in 1485. 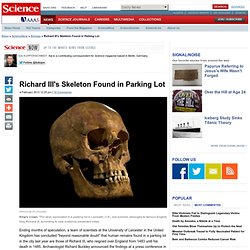 Archaeologist Richard Buckley announced the findings at a press conference in Leicester this morning. The scientists on the panel hugged, and attending journalists whooped and clapped after the announcement. Although local legend had it that the monarch's bones had been tipped into the river, some scientists were convinced he was still buried at a Franciscan monastery in Leicester. That monastery had been demolished in the 16th century, however, and researchers looking for Richard III found his remains below a modern-day parking lot last summer.

‘Beyond reasonable doubt,’ bones are the remains of England’s King Richard III. “It is the academic conclusion of the University of Leicester that beyond reasonable doubt, the individual exhumed at Greyfriars in September 2012 is indeed Richard III, the last Plantagenet king of England,” Richard Buckley, lead archaeologist of the University of Leicester, said at the announcement Monday in the city 90 miles northwest of London. The verification came after scientific tests were used to match DNA samples taken from Canadian-born Michael Ibsen, a direct descendent of Anne of York, Richard’s elder sister. “For me it’s an absolute privilege to be a part, even in a small way, of such a historically significant series of events,” said Ibsen, a furniture-maker in London. Scholars Say Bones Belonged to Richard III. King Richard III? World's first image of Grey Friars skull unveiled. Castle Warfare in the Gesta Stephani. The reign of the English king Stephen (1135-1154), popularly known as 'the Anarchy', is a fruitful source of study for historians and castellologists, providing evidence for the deployment of 'adulterine' castles and the conduct of siege warfare.

It is a reign that has been considered by several recent authors, including most notably Matthew Strickland. Stephen succeeded his uncle, King Henry I of England, in 1135. This was a controversial succession seeing as Henry had a daughter living, Matilda, to whom his barons had sworn three oaths of allegiance. Matilda, furthermore, had an infant son by the time of her father's death (the future Henry II) and so it could be argued that she should have inherited the throne if not in her own right then at least as reigning guardian for her child.