Extract: Regeneration: Popular Penguins. Finished with the War A Soldier's Declaration I am making this statement as an act of wilful defiance of military authority, because I believe the war is being deliberately prolonged by those who have the power to end it. 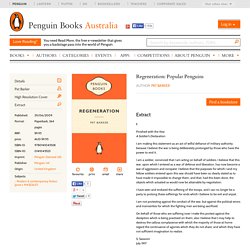 I am a soldier, convinced that I am acting on behalf of soldiers. I believe that this war, upon which I entered as a war of defence and liberation, has now become a war of aggression and conquest. I believe that the purposes for which I and my fellow soldiers entered upon this war should have been so clearly stated as to have made it impossible to change them, and that, had this been done, the objects which actuated us would now be attainable by negotiation. I have seen and endured the suffering of the troops, and I can no longer be a party to prolong these sufferings for ends which I believe to be evil and unjust. Pat-barker-regeneration-excerpt.pdf. Barker_interview.pdf. Hemingway on War and Its Aftermath. Hemingway used this 1923 passport for his return to Europe, where he initially worked as a correspondent for the Toronto Star. 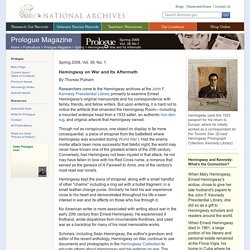 (Ernest Hemingway Photograph Collection, Kennedy Library) Hemingway and Kennedy: What's the Connection? When Mary Hemingway, Ernest Hemingway's widow, chose to give her late husband's papers to the John F. Kennedy Presidential Library, she did so as a gift to Hemingway scholars and readers around the world. When Ernest Hemingway died in 1961, a large portion of his literary and personal estate remained at the Finca Vigia, his home in Cuba where he and Mary lived before Castro's revolution. Through the intervention of President John F. Mary Hemingway considered numerous sites for the Hemingway Collection. The Heritage of the Great War / First World War 1914 - 1918. 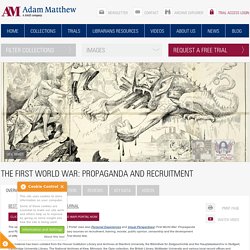 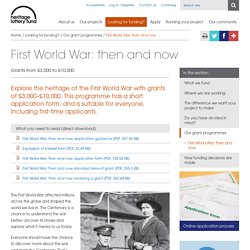 This programme has a short application form, and is suitable for everyone, including first-time applicants. What you need to read (direct download) Extract_574100.pdf. The First World War. The 20th Century: Topic 1: Overview. Today we know it as World War I, but those who lived through it called it the Great War. 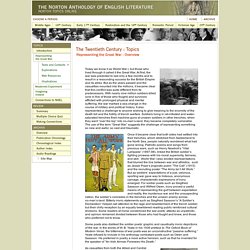 At first, the war was predicted to last only a few months and to result in a resounding success for the British Empire and its allies. But as the years passed and the casualties mounted into the millions, it became clear that this conflict was quite different from its predecessors. With nearly nine million soldiers killed (one in five of those who fought) and survivors afflicted with prolonged physical and mental suffering, the war marked a sea-change in the course of military and political history.

It also represented a challenge to anyone wishing to give meaning to the enormity of the death toll and the futility of trench warfare. Soldiers living in rat-infested and water-saturated trenches fired machine-guns at unseen soldiers in other trenches; when they went “over the top” into no-man’s-land, they became completely vulnerable. Literature and the War. Paul Fussell, The Great War and Modern Memory (1975). 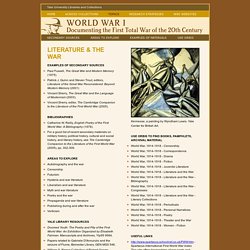 Patrick J. Quinn and Steven Trout, editors, Literature of the Great War Reconsidered: Beyond Modern Memory (2001) Vincent Sherry, The Great War and the Language of Modernism (2003). Ann-Marie%20Einhaus%20review.pdf. BBC iWonder - Was World War One propaganda the birth of spin? WarStories.pdf. THE POETRY OF THE FIRST WORLD WAR. FIRST WORLD WAR POETRY Key war poets including Wilfred Owen and Siegfried Sassoon,famous war poems (with notes), war poetry anthologies, and maps War Poetry Books Minds at War Out in the Dark We Are the Dead French Poems of the First World War Also see our Books page for many more anthologies and collections of poems by individual poets. 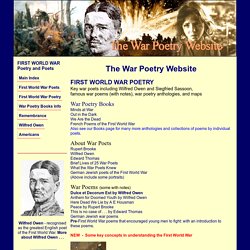 About War Poets Rupert Brooke Wilfred OwenEdward Thomas Brief Lives of 25 War Poets What the War Poets Knew German Jewish poets of the First World War(Above include some portraits) War Poems (some with notes) Dulce et Decorum Est by Wilfred Owen Anthem for Doomed Youth by Wilfred OwenHere Dead We Lie by A E Housman Peace by Rupert BrookeThis is no case of . . . by Edward Thomas German Jewish war poems Pre-First World War poems that encouraged young men to fight: with an introduction to these poems. The War Poet Association. Literary memories of World War One. Prose & Poetry. More than any other conflict, the Great War inspired writers of all generations and classes, most notably among combatants. 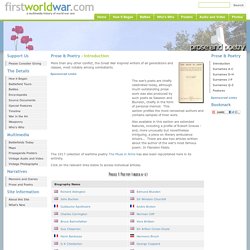 The war's poets are chiefly celebrated today, although much outstanding prose work was also produced by such poets as Sassoon and Blunden, chiefly in the form of personal memoir. This section profiles the more renowned authors and contains samples of their work. Also available in this section are extended features, including a profile of Robert Graves - and, more unusually but nevertheless intriguing, a piece on literary ambulance drivers...

There are also two articles written about the author of the war's most famous poem: In Flanders Fields. The 1917 collection of wartime poetry The Muse in Arms has also been republished here in its entirety. Click on the relevant links below to access individual articles. A 'flying pig' was a mortar bomb. The Great War Archive. Literary Connections: The First World War in Literature - materials for AQA A Level English Literature (LTA6 and new AS) Lost Poets of the Great War. Poetry of The Great War: 'From Darkness to Light'? Westminster Abbey » Poets of the First World War. On 11 November 1985 in Poets' Corner Westminster Abbey Ted Hughes, Poet Laureate, unveiled a memorial stone commemorating poets of the First World War. 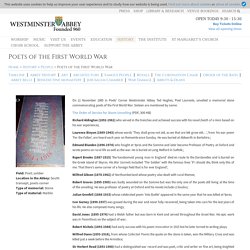 Sixteen are mentioned by name: The Order of Service for Stone Unveiling (PDF, 300 KB) Richard Aldington (1892-1962) who served in the trenches and achieved success with his novel Death of a Hero based on his war experiences; Laurence Binyon (1869-1943) whose words 'They shall grow not old, as we that are left grow old…', from his war poem 'For the Fallen', are heard each year on Remembrance Sunday. He was buried at Aldworth in Berkshire. 00703505.pdf. The First World War in Canadian Literature. The response to the First World War in Canadian literature, while seemingly uniform on the surface, is in reality far more varied and complex. 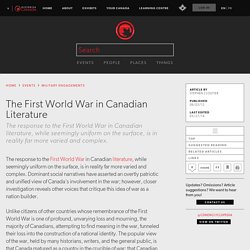 The response to the First World War in Canadian literature, while seemingly uniform on the surface, is in reality far more varied and complex. Dominant social narratives have asserted an overtly patriotic and unified view of Canada's involvement in the war; however, closer investigation reveals other voices that critique this idea of war as a nation builder. Unlike citizens of other countries whose remembrance of the First World War is one of profound, unvarying loss and mourning, the majority of Canadians, attempting to find meaning in the war, funneled their loss into the construction of a national identity. French Canada's cultural and literary approaches to the First World War were far more isolationist. Anthem for Doomed Youth. On June 28, 1914, Gavrilo Princip, a radical Serbian student, assassinated the Archduke of Austria-Hungary, Francis Ferdinand, and his wife Sophie.

This single, amateurish stunt for Serbian independence, coupled with arrogant foreign relations and entangling alliances, would, within a month, draw the western world into the most cruel, catastrophic war it had ever known. The First World War arrived at the climax of an era of unprecedented growth and achievement in Europe, shattering people's faith in king and country, and putting the lie to the popular notion that man and society had been progressing and improving right in step with the giant strides of the industrial revolution. This was total war. This time everyone would be affected: laborers, tradesmen, public school boys, Oxbridge graduates, and women. Great War Literature. War propaganda. In our catalogue: POSTER This publication is another example of an inter-war recruitment poster, dated between 1919-1920, aiming to recruit civilians to the Royal Army Medical Corps.

Formed in 1898 by royal warrant, the RAMC was and is still the largest corps in the Army Medical Service. It combined the soldiers of the Army Hospital Corps (known as the Medical Staff Corps between 1884 and 1898) with the officers of the Medical Staff. At the outbreak of the First World War the RAMC numbered around 9,000 men; by 1918 that had risen to around 113,000. From the professions listed it is clear that this poster is designed to recruit civilians to the soldier trades in the RAMC rather than the officer professions. Online Picture Dictionary.