Making Projects Click. Planning Forms. Teaching Notes for the Brominator problem. Teaching Notes for THE BROMINATOR Student Learning Objectives: To recognize elements as metals or nonmetals from their position in the periodic table To recognize the reaction between a metal and a nonmetal as an electron transfer process, and to be able to explain why such occurs, in the context of element positions in the periodic table. 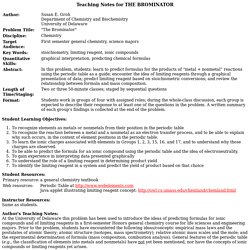 To learn the ionic charges associated with elements in Groups 1, 2, 3, 15, 16, and 17, and to understand why those charges are observed. To be able to predict the formula for an ionic compound using the periodic table and the idea of electroneutrality. To gain experience in interpreting data presented graphically To understand the role of a limiting reagent in determining product yield To identify the limiting reagent in a system and predict the yield of product based on that choice Student Resources: Instructor Resources: Same as students.

Formula: An element Q has two isotopes: xQ (57.3%) and (x+2)Q (42.7%). [Mol. THE BROMINATOR. Running a reaction that liberated copious amounts of H2S just as the President and the Board of Trustees were touring the new chemistry building was, in hindsight, not a good idea. 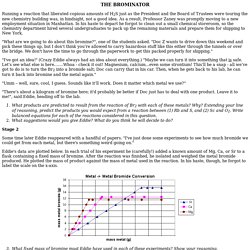 As a result, Professor Zaney was promptly moving to a new employment situation in Manhattan. In his haste to depart he forgot to clean out a small chemical storeroom, so the chemistry department hired several undergraduates to pack up the remaining materials and prepare them for shipping to New York. "What are we going to do about this bromine? ", one of the students asked. "Doc Z wants to drive down this weekend and pick these things up, but I don’t think you’re allowed to carry hazardous stuff like this either through the tunnels or over the bridge. 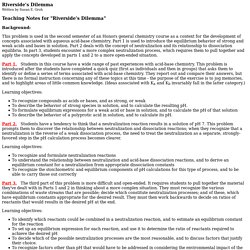 Groh Teaching Notes for "Riverside's Dilemma" Background: This problem is used in the second semester of an Honors general chemistry course as a context for the development of concepts associated with aqueous acid-base chemistry. Part 1 is used to introduce the equilibrium behavior of strong and weak acids and bases in solution.

Part 1. Learning objectives: To recognize compounds as acids or bases, and as strong, or weak To describe the behavior of strong species in solution, and to calculate the resulting pH. Part 2. PBL: Riverside's Dilemma. Riverside's DilemmaWritten by Susan E. 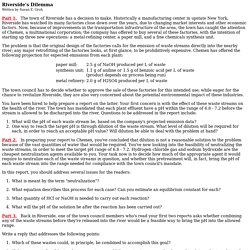 Groh Part 1. The town of Riverside has a decision to make. Historically a manufacturing center in upstate New York, Riverside has watched its many factories close down over the years, due to changing market interests and other economic factors. Now, because of improvements in the transportation infrastructure of the area, the town has caught the attention of Chemex, a multinational corporation; the company has offered to buy several of these factories, with the intention of starting up three new operations: a metal-refining center, a paper mill, and a fine chemicals synthesis unit. The problem is that the original design of the factories calls for the emission of waste streams directly into the nearby river; any major retrofitting of the factories looks, at first glance, to be prohibitively expensive. 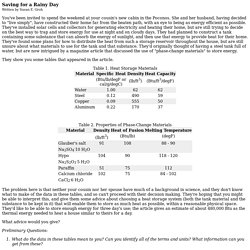 Groh You've been invited to spend the weekend at your cousin's new cabin in the Poconos. She and her husband, having decided to "live simply", have constructed their home far from the beaten path, with an eye to being as energy efficient as possible. They've installed solar cells and collectors for generating electricity and heating their home, but are still trying to decide on the best way to trap and store energy for use at night and on cloudy days.

They had planned to construct a tank containing some substance that can absorb the energy of sunlight, and then use that energy to provide heat for their home. They show you some tables that appeared in the article. Table 1. Table 2. The problem here is that neither your cousin nor her spouse have much of a background in science, and they don't know what to make of the data in these tables, and so can't proceed with their decision making. What advice would you give? Preliminary Questions: Project Search.