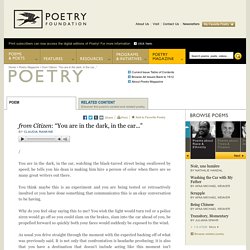 You think maybe this is an experiment and you are being tested or retroactively insulted or you have done something that communicates this is an okay conversation to be having. Why do you feel okay saying this to me? You wish the light would turn red or a police siren would go off so you could slam on the brakes, slam into the car ahead of you, be propelled forward so quickly both your faces would suddenly be exposed to the wind. As usual you drive straight through the moment with the expected backing off of what was previously said.

When you arrive in your driveway and turn off the car, you remain behind the wheel another ten minutes. TURF FEINZ "RIP RichD" YAK FILMS DANCING in the RAIN DANSE SOUS LA PLUIE HIPHOP STREET DANCE Oakland. Do You Live in a "Bitch" or a "Fuck" State? American Curses, Mapped. Why Junot Diaz urges you to read more promiscuously - Home. Cornel West's Rise and Fall by Michael Eric Dyson. Nor hell a fury like a woman scorned” is the best-known line from William Congreve’s The Mourning Bride. 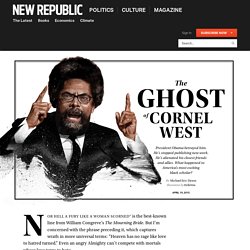 But I’m concerned with the phrase preceding it, which captures wrath in more universal terms: “Heaven has no rage like love to hatred turned.” Even an angry Almighty can’t compete with mortals whose love turns to hate. This foreigner's guide to Irish accents will give you a good laugh. Ear-gasmic sounds here. 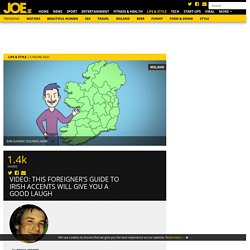 With St Patrick's Day fast approaching, we're certain that a huge amount of tourists will be flooding into the 32 counties as Irish people welcome them with open arms. Hope This Helps. How a book club is helping to keep ex-offenders from going back to jail. Hip-Hop Sampling - Copyright Criminals. Demographic analysis for "seriously" The Wrong Way to Teach Grammar. A century of research shows that traditional grammar lessons—those hours spent diagramming sentences and memorizing parts of speech—don’t help and may even hinder students’ efforts to become better writers. 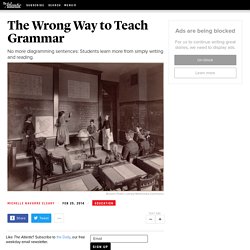 Yes, they need to learn grammar, but the old-fashioned way does not work. A Picture Of Language: The Fading Art Of Diagramming Sentences : NPR Ed. The design firm Pop Chart Lab has taken the first lines of famous novels and diagrammed those sentences. 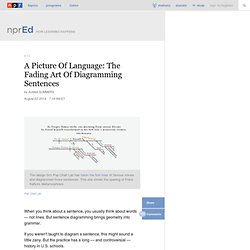 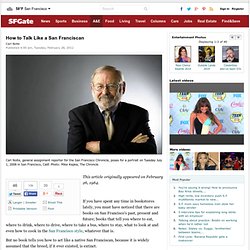 If you have spent any time in bookstores lately, you must have noticed that there are books on San Francisco's past, present and future; books that tell you where to eat, where to drink, where to drive, where to take a bus, where to stay, what to look at and even how to cook in the San Francisco style, whatever that is. But no book tells you how to act like a native San Franciscan, because it is widely assumed that the breed, if it ever existed, is extinct. One book, "San Francisco Free and Easy," subtitled "The Native's Guide Book," says on the first page, "San Franciscans are notorious newcomers.

You'll find few people here with the sort of roots common to East Coast cities... " Another, written by a carpetbagger named John K. Fifteen years ago? A terrible thing has happened to native San Franciscans. The first thing to go is the language. The first lesson - learned at birth - is never to call it Frisco or San FRANcisco. Myrrhdomingo.com. How not to say the wrong thing - LA Times. When Susan had breast cancer, we heard a lot of lame remarks, but our favorite came from one of Susan's colleagues. 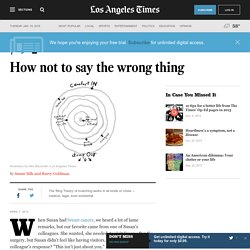 She wanted, she needed, to visit Susan after the surgery, but Susan didn't feel like having visitors, and she said so. Her colleague's response? "The Human Voice" from StoryCorps. James Baldwin Debates William F. Buckley (1965) The Largest Vocabulary in Hip hop. Voices from the Days of Slavery - Faces and Voices from the Presentation (American Memory from the Library of Congress) Approximately four million Americans enslaved in the United States were freed at the conclusion of the American Civil War. 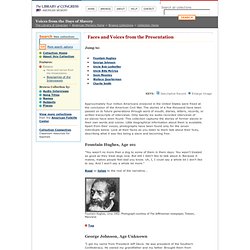 The stories of a few thousand have been passed on to future generations through word of mouth, diaries, letters, records, or written transcripts of interviews. Only twenty-six audio-recorded interviews of ex-slaves have been found. This collection captures the stories of former slaves in their own words and voices. Chronicling Stankonia. From Brooklyn to Bo-Kaap - Rolling Stone South Africa. Music Exchange, one of South Africa's premier music, film, and entertainment conferences, was held in Cape Town's City Hall this weekend. 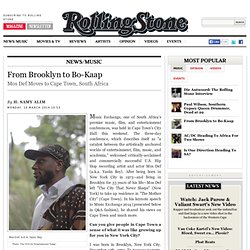 The three-day conference, which describes itself as "a catalyst between the artistically anchored worlds of entertainment, film, music, and academia," welcomed critically-acclaimed and commercially successful U.S. Hip Hop recording artist and actor Mos Def (a.k.a. Angela Davis & Toni Morrison / How do we become whole ... after traumas that threaten to splinter our souls?: On literacy, libraries, & liberation » onlineJournal. “Write it down, girl. 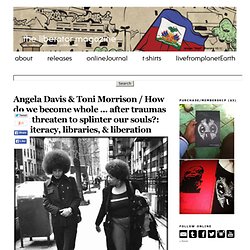