Examine a landscape formed by erosion. Birth of the Earth (full episode) (how the Earth was made) Science In Your State: Ohio. Geologic Time. Initially compiled by Laurie Cantwell, Montana State University This section highlights animations, images, interactive graphics and videos used to teach the concept of geologic time in an introductory geology course. 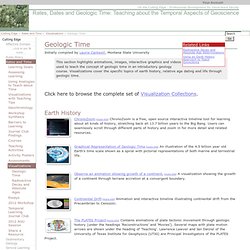 Visualizations cover the specific topics of earth history, relative age dating and life through geologic time. Click here to browse the complete set of Visualization Collections. Earth History ChronoZoom (more info) ChronoZoom is a free, open source interactive timeline tool for learning about all kinds of history, stretching back all 13.7 billion years to the Big Bang. Graphical Representation of Geologic Time (more info) An illustration of the 4.5 billion year old Earth's time scale shown as a spiral with pictorial representations of both marine and terrestrial life. Observe an animation showing growth of a continent. Continental Drift (more info) Animation and interactive timeline illustrating continental drift from the Precambrian to Cenozoic. 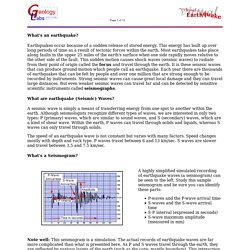 Earthquakes occur because of a sudden release of stored energy. This energy has built up over long periods of time as a result of tectonic forces within the earth. Most earthquakes take place along faults in the upper 25 miles of the earth's surface when one side rapidly moves relative to the other side of the fault. This sudden motion causes shock waves (seismic waves) to radiate from their point of origin called the focus and travel through the earth.

It is these seismic waves that can produce ground motion which people call an earthquake. What are earthquake (Seismic) Waves? A seismic wave is simply a means of transferring energy from one spot to another within the earth. The speed of an earthquake wave is not constant but varies with many factors. What's a Seismogram? Note well: This seismogram is a simulation. Life Science Lesson Plans. Bozeman Biology Videos. 15_magfields.pdf. Coulomb's Law. Forms of Energy: Motion, Heat, Light, Sound. What forms of energy is Raul using to move his LEGO car? 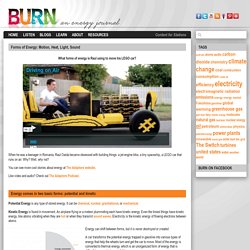 When he was a teenager in Romania, Raul Oaida became obsessed with building things: a jet-engine bike, a tiny spaceship, a LEGO car that runs on air. Why? Well, why not? You can see more cool stories about energy at The Adaptors website. Like video and audio? Energy comes in two basic forms: potential and kinetic Potential Energy is any type of stored energy. Kinetic Energy is found in movement. Energy can shift between forms, but it is never destroyed or created. A car transforms the potential energy trapped in gasoline into various types of energy that help the wheels turn and get the car to move. Power plants transform one form of energy into a very useful form, electricity. These transformations are hardly perfect. Forms of Potential Energy Systems can increase gravitational energy as mass moves away from the center of Earth or other objects that are large enough to generate significant gravity (our sun, the planets and stars). 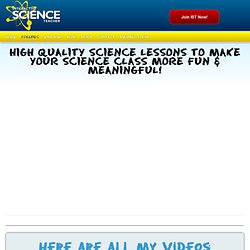 Each science lesson stays focused on, and builds around, standards that students are expected to understand. Strong Teacher Support I feel that since you’re the one presenting the lesson, it’s crucial that you understand it and be fully prepared. My videos will show you exactly what to do, including all those subtle things that can make or break a lesson. PowerPoints Most lessons include a custom-made PowerPoint that will guide you and your students through the lesson. Numbers Well over 100 Interactive Science Lessons, hundreds of clear and concise PowerPoint slides, 50 hours of video instruction for you, and hundreds of pictures and drawings.