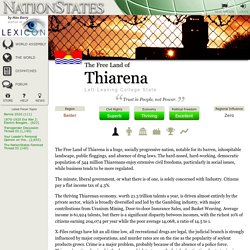 Political Freedom Excellent The Free Land of Thiarena is a huge, socially progressive nation, notable for its barren, inhospitable landscape, public floggings, and absence of drug laws. The minute, liberal government, or what there is of one, is solely concerned with Industry. The thriving Thiarenan economy, worth 21.3 trillion talents a year, is driven almost entirely by the private sector, which is broadly diversified and led by the Gambling industry, with major contributions from Uranium Mining, Door-to-door Insurance Sales, and Basket Weaving. X-Files ratings have hit an all-time low, all recreational drugs are legal, the judicial branch is strongly influenced by major corporations, and murder rates are on the rise as the popularity of soylent products grows.

Thiarena is ranked 48,247th in the world and 1,274th in Balder for Highest Workforce Participation Rate, with 73.81 Workforce Participation Rate. Report. Mst3k1_2 - Parchment. Top games with HTC Vive support tagged Virtual Reality - itch.io. Alpha 1.3084. Unofficial Star Citizen FAQs - Google Drive - Waterfox. Naissance: * Age of Discovery Contest contest: THE WINNERS ! * - Waterfox. Post 1: Introduction of our team and the philosophy behind the Sporenaissance However in short if you don't want to read it all: EVERYONE is welcome to show creations on our topic, you do not need to be a member or something. 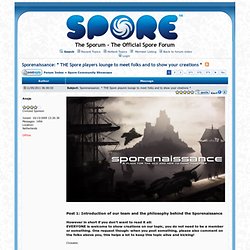 One request though: when you post something, please also comment on the folks above you, this helps a lot to keep this topic alive and kicking! Clickable: Post 2: Sporenaissance contests and challenges No ongoing challenges at the moment or soon to be expected, sorry. Skyrim Script Extender (SKSE) - Waterfox. Skyrim GEMS. BORDERLANDS 2 THE COMPLETE PICTURE. HackerTyper Neo. "Hack" like a programmer in movies and games! 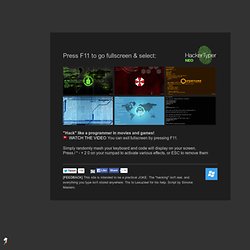 WATCH THE VIDEO You can exit fullscreen by pressing F11. Simply randomly mash your keyboard and code will display on your screen. Project Triforce. HackerTyper Neo. "Hack" like a programmer in movies and games! 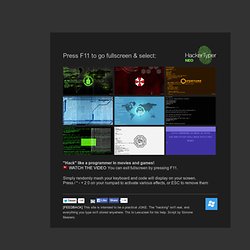 WATCH THE VIDEO You can exit fullscreen by pressing F11. Simply randomly mash your keyboard and code will display on your screen. The Internet Arcade : Free Software. By Williams software eye favorite 227 comment 19 Defender is an arcade video game developed and released by Williams Electronics in February 1981.

By Sega favorite 54 comment 8. The Last Court. Archery Tag® PIP Boy SmartPhone Case. I wanted to learn how to use my Dremel, I had a bag full of balsa wood scraps and I was just starting a game of Fallout 3. 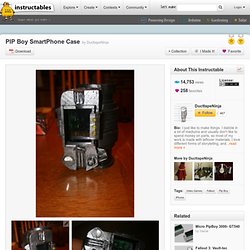 A PIP Boy just needed to happen. This prop was built out of a large cardboard tube, craft foam and balsa wood with an iPhone for a screen. The scroll wheel to the left of the screen is actually a rudimentary button over the iPhone's home button, allowing near full access to the phone's different functions. If my recording of Galaxy News Radio is interrupted by a phone call, I should be able to navigate to speakerphone and back without issue.

I started with carving a block of balsa wood into a basic shape with my Dremel, carving and gluing on details until It looked close to the way it looks in the game. The below videos show how the whole thing looks with a proper screen on display. A List of Space/Sci-Fi/Fantasy Games You Can’t Miss in 2014 - SpaceSector.com. Another year, another list of interesting space-based, science fiction and fantasy-themed games to look for. 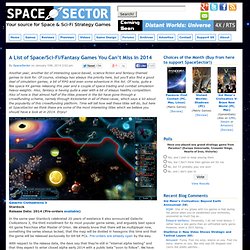 Of course, strategy has always the priority here, but you’ll also find a good deal of simulation games, a bit of RPG and even some adventure in this list. Of note, quite a few space 4X games releasing this year and a couple of space trading and combat simulation heavy-weights. Also, fantasy is having quite a year with a bit of always healthy competition. Algebra Calculator - MathPapa. Algebra Calculator is a calculator that gives step-by-step help on algebra problems. Disclaimer: This calculator is not perfect. Please use at your own risk, and please alert us if something isn't working. Thank you. Type your algebra problem into the text box. Borderlands 2: Golden Key - Orcz.com, The Video Games Wiki. A Golden Loot Chest in Borderlands 2. 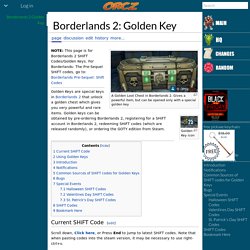 Gives a powerful item, but can be opened only with a special golden key NOTE: This page is for Borderlands 2 SHiFT Codes/Golden Keys. For Borderlands: The Pre-Sequel SHiFT codes, go to: Borderlands Pre-Sequel: Shift Codes Golden Keys are special keys in Borderlands 2 that unlock a golden chest which gives you very powerful and rare items. Golden keys can be obtained by pre-ordering Borderlands 2, registering for a SHiFT account in Borderlands 2, redeeming SHiFT codes (which are released randomly), or ordering the GOTY edition from Steam. Current SHiFT Code[edit] Scroll down, Click here, or Press End to jump to latest SHiFT codes. Using Golden Keys[edit] Locate The Golden Mysterious Loot Chest in Pierce Station in the city of Sanctuary (i.e. where you are when you enter the game in Sanctuary or use a Fast Travel station). Introduction[edit]