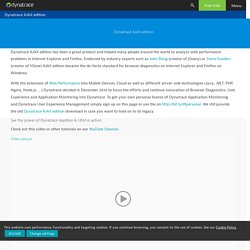 Endorsed by industry experts such as John Resig (creator of jQuery) or Steve Souders (creator of YSlow) AJAX edition became the de-facto standard for browser diagnostics on Internet Explorer and Firefox on Windows. With the extension of Web Performance into Mobile Devices, Cloud as well as different server-side technologies (Java, .NET, PHP, Nginx, Node.js, …) Dynatrace decided in December 2014 to focus the efforts and continue innovation of Browser Diagnostics, User Experience and Application Monitoring into Dynatrace. To get your own personal license of Dynatrace Application Monitoring and Dynatrace User Experience Management simply sign up on this page or use the on We still provide the old Dynatrace AJAX edition download in case you want to hold on to its legacy.

Contact us. Flood IO: Cloud Load Testing for Everyone with JMeter or Gatling. About the HTTP Archive. Successful societies and institutions recognize the need to record their history - this provides a way to review the past, find explanations for current behavior, and spot emerging trends. 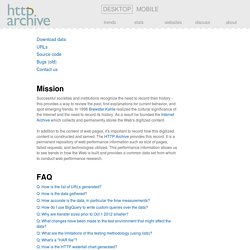 In 1996 Brewster Kahle realized the cultural significance of the Internet and the need to record its history. As a result he founded the Internet Archive which collects and permanently stores the Web's digitized content. In addition to the content of web pages, it's important to record how this digitized content is constructed and served. The HTTP Archive provides this record. It is a permanent repository of web performance information such as size of pages, failed requests, and technologies utilized. How is the list of URLs generated? The list of URLs is based on the Alexa Top 1,000,000 Sites (zip). How is the data gathered? Apache JMeter - Apache JMeter™ 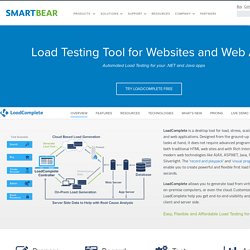 Designed from the ground-up to help you focus on the tasks at hand, it does not require advanced programming skills. It works with both traditional HTML web sites and with Rich Internet Applications using modern web technologies like AJAX, ASP.NET, Java, Flash, Flex and Silverlight. The 'record and playpack' and 'visual programming' features enable you to create powerful and flexible first load test within a few seconds. LoadComplete allows you to generate load from virtual machines, on-premise computers, or even the cloud. Customized reports in LoadComplete help you get end-to-end visibility and find problems at both client and server side. 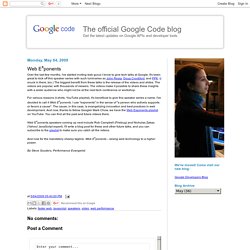 It's been great to kick off this speaker series with such luminaries as John Resig, Doug Crockford, and PPK. (I snuck in there, too.) The biggest benefit from these talks is the release of the videos and slides. The videos are popular, with thousands of viewers. The videos make it possible to share these insights with a wider audience who might not be at the next tech conference or workshop. For various reasons (t-shirts, YouTube playlist), it's beneficial to give this speaker series a name. Web Exponents speakers coming up next include Rob Campbell (Firebug) and Nicholas Zakas (Yahoo! And now for the mandatory cheesy tagline: Web Exponents - raising web technology to a higher power. By Steve Souders, Performance Evangelist.