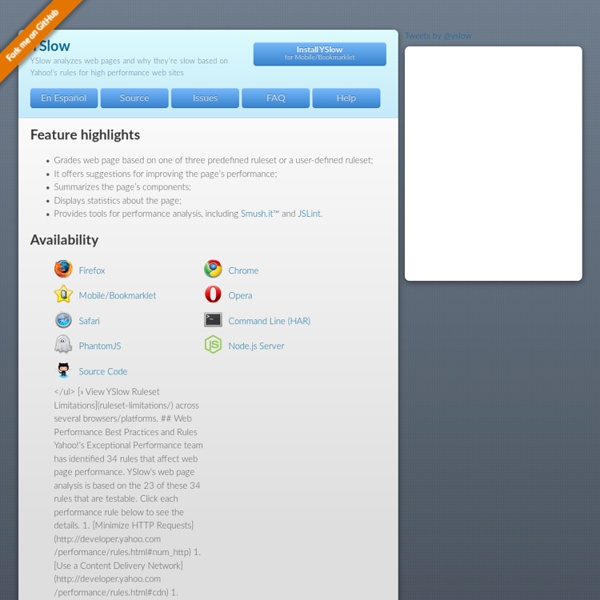 Compressive Images Revisited - TimKadlec.com 2012 was a dark time for responsive images. Standards work had begun, but there was no consensus and many angry people (myself included). Some remained unconvinced that responsive images were even a problem that needed to be solved. But there was still a glimmer of hope in these dark days. Startups Started By Former Yahoo Employees [Graphic] Oh Quora! You’ve done it again. This time with the utterly fascinating “What startups have been started by former Yahoo employees?” thread which provides a pretty comprehensive list from AClevertwist.com to Ycombinator.com (Quick, some ex-Yahooer start a Z-word startup!) of startups founded by former Yahoo employees, which, as we’ve already pointed out, are a force to be reckoned with.

The DOM isn’t slow, you are. Edited post-HN: Wow, big response! WARNING: May contain traces of opinion, and naughty words like ‘shit’ and ‘internet explorer’. Use jQuery for what it is meant for, not everything.If you do stupid shit with the DOM, it will perform poorly.If your web-app is slow, it’s because of your code, not the DOM. Whenever the native versus web argument arises, the biggest issue people usually have with web is performance. They quote figures like ‘60fps‘ and ‘scroll speed’, and, back when browsers were just getting good, i would say “OK, there’s work to be done, but they will get there”, which was met with anything from “Yeah maybe” to “No it will never happen!”. Really? FM 100 Hue Test Are you among the 1 in 255 women and 1 in 12 men who have some form of color vision deficiency? If you work in a field where color is important, or you’re just curious about your color IQ, take our online challenge to find out. Based on the Farnsworth Munsell 100 Hue Test, this online challenge is a fun, quick way to understand your color vision acuity. Just remember, this is not a replacement for the full test! FACT: 1 out of 255 women and 1 out of 12 men have some form of color vision deficiency.

Accelerated Rendering in Chrome: The Layer Model Introduction For most web developers the fundamental model of a web page is the DOM. Rendering is the often obscure process of turning this representation of a page into a picture on the screen. Modern browsers have changed the way rendering works in recent years to take advantage of graphics cards: this is often vaguely referred to as “hardware acceleration”. When talking about a normal web page (i.e. not Canvas2D or WebGL), what does that term really mean?

Tools for Web Developers   Lighthouse is an open-source, automated tool for improving the quality of web pages. You can run it against any web page, public or requiring authentication. It has audits for performance, accessibility, progressive web apps, SEO and more. Why I Love Pingdom Tools – Writings of a Page Load Speed Geek Pingdom tools is an incredibly handy web site that provides what would normally be an entire suite of website speed testing tools in a simple, elegant, easy-to-use package. Loading speed is an inescapable fact of life for web designers. When a user goes to a web page, they expect to access it quickly, and if they have to wait for even a short amount of time they’re probably going to move on. For this reason, no matter how pleased I might be by the cool new web site I just made, I make sure to take advantage of Pingdom to make sure that my audience will stick around long enough to check it out. The only information Pingdom asks of me is an address and a location to test from. This lets me check out loading times for whatever site I’m working on from my hometown, any major city, or any continent, all quickly and easily — and without a router enclosure.

Machine Learning Machine learning is the science of getting computers to act without being explicitly programmed. In the past decade, machine learning has given us self-driving cars, practical speech recognition, effective web search, and a vastly improved understanding of the human genome. Machine learning is so pervasive today that you probably use it dozens of times a day without knowing it. The Browsers Performance in Dependence of HTML Coding Everyday dealing with creating and animating web sites I began to notice a very unpleasant peculiarity — one at the same JavaScript code works with the different speed on different sites. The cause of such strange behavior was found very promptly: speed of a script execution depended directly on the way the site was HTML coded. Searching of solutions of the arised problems was quite exciting but unfortunately I couldn't share the results of my investigations because of the local character of all the solutions.

5 performance guide for system administrators In this document we detail performance related settings that you can set in your server to get the most out of it. Some of them were already part of previous Shopware releases, which we complemented with new addictions, for optimized performance and scalability. In most cases, it's assumed that you have already installed and configured Shopware on your server, and that it's running properly. This document does not cover configuration options needed by Shopware (for example, increasing PHP's memory_limit to an acceptable level), and focus only on making an already working system perform better. Note: This guide only covers system configuration optimizations, and does not cover Shopware's configuration itself. However, there are several configuration options inside Shopware itself that you can use to improve you shop's performance.

What is Minification? – Writings of a Page Load Speed Geek What is Minification? Minification, which is also known as minimisation or minimization, removes unnecessary characters from source code in computer programming languages such as JavaScript. This removal does not alter the functionality of the code. Examples of unnecessary characters are white spaces, new line characters, block delimiters (used to make the code more readable but not required for the computer’s use), and comments. Removing these reduces the amount of data the computer must transfer, and it may also be used as obfuscation — which is not to be confused with false cryptography.

Web 2 Tools by Task Avators: Build your Wild Self - create a self portrait and learn about the animal parts incorporated into your avatar. Mikons - where people communicate through visual symbols, logos, icons, or avatars to tell a story Voki.com is a web application that produces animated characters to which you can add your voice (or anybody else’s). Blogging / Bookmarking Tools: