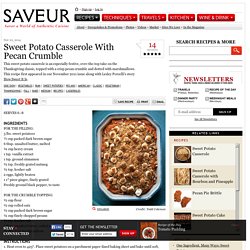 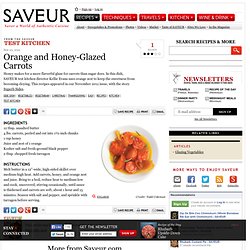 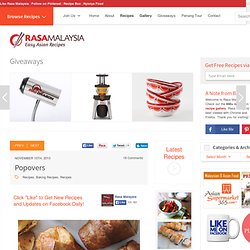 Preheat oven to 450 degree F with a nonstick popover pan on rack in lowest position. Russ Parsons' Dry-Brined Turkey (a.k.a. The Judy Bird) recipe on Food52.com. Cooking is more fun with friends. 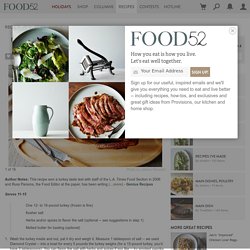 Find your friends who are already on Food52, and invite others who aren't to join. Let's GoLearn more Join Our Community Follow amazing home cooks. Thanksgiving recipe swap. Hungarian sour cherry strudel Although I've spent the majority of my life in the US, I was actually born in Budapest. 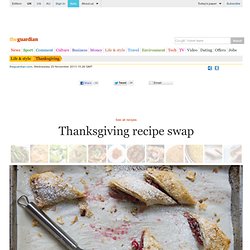 My mother was a great cook, and I grew up eating all sorts of Hungarian dishes. Strudels filled with apples, cherries, or sweetened farmer's cheese were a popular dessert at our table. With the wide availability of frozen phyllo dough, strudels are easier to make than pie, can be assembled ahead of time, and held in the freezer until you are ready to bake. Thanksgiving recipe swap. Stuffing Muffins V Recipe. Pumpkin Stuffed with Everything Good Recipe.

Center a rack in the oven and preheat the oven to 350 degrees F. 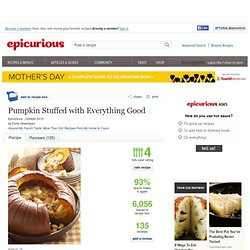 Line a baking sheet with a silicone baking mat or parchment, or find a Dutch oven with a diameter that's just a tiny bit larger than your pumpkin. If you bake the pumpkin in a casserole, it will keep its shape, but it might stick to the casserole, so you'll have to serve it from the pot—which is an appealingly homey way to serve it.

If you bake it on a baking sheet, you can present it freestanding, but maneuvering a heavy stuffed pumpkin with a softened shell isn't so easy. However, since I love the way the unencumbered pumpkin looks in the center of the table, I've always taken my chances with the baked-on-a-sheet method, and so far, I've been lucky. Using a very sturdy knife—and caution—cut a cap out of the top of the pumpkin (think Halloween Jack-o-Lantern). Whole pumpkin-stuffed custard a hit with family - Spokesman Mobile - Nov. 20, 2013. November 20, 2013 - Updated: 7:16 a.m. 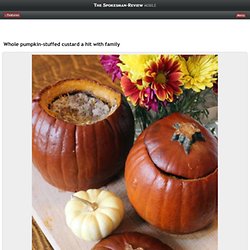 “For pottage and puddings and custard and pies, Our pumpkins and parsnip are common supplies: We have pumpkins at morning and pumpkins at noon, If it were not for pumpkins, we should be undoon” – Pilgrim rhyme from the 1630s Vandetta Williams usually serves three desserts at Thanksgiving: chocolate pie with graham cracker crust, coconut cream pie or cheesecake – “It’s one or the other” – and a thick, slightly sweet custard baked inside a whole pumpkin.

The baked whole pumpkin, grown in her Spokane garden, gets the place of honor. It’s a family favorite, first made as a conversation starter for the grandkids some 20 years ago. They liked the fact that dessert was in an actual pumpkin. She still does. “There’s nothing to it, really,” she said. Food Network. Roasted Beets with Orange and Creme Fraiche. Enlarge Credit: Vanessa Rees Ingredients 3 lb. beets (about 10 large)3 tbsp. olive oilKosher salt and freshly ground black pepper, to taste1 cup crème fraîcheZest and juice of 1 orange Instructions Heat oven to 400°. 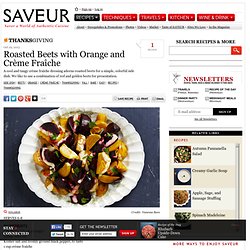 Place beets in a 9” x 13” ovenproof dish; toss with oil, salt, and pepper. Thanksgiving recipe swap. Sichuan dry-fried green beans If I had to choose a traditional Thanksgiving dish to replace, I'd replace green bean casserole. 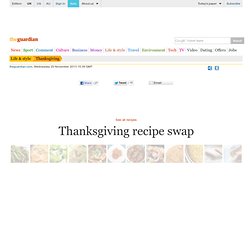 I didn't grow up eating green bean casserole, and while it's an interesting dish, there are much better ways to cook green beans — like Sichuan dry-fried green beans. This dish reminds me of when I was living in Beijing in my mid-20s and spending Thanksgiving with other American expats. The method for cooking the dish (dry-frying) renders it super crispy, which I find so much better than mushy green beans that you bake in a casserole dish. Broiled Spaghetti Squash with Miso Glaze. Brussels Sprouts and Bacon. Enlarge Credit: Todd Coleman Ingredients 12 oz. slab bacon, cut into matchsticks1 tbsp. olive oil2 tbsp. unsalted butter2 lb. 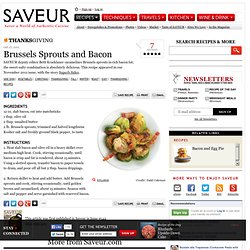 Brussels sprouts, trimmed and halved lengthwiseKosher salt and freshly ground black pepper, to taste Instructions. Mushroom Phyllo Bundles Recipe. In the Raw. Enlarge Credit: Ingalls Photography For me, the whole thing began with radishes. When I was seven, thanks to the spiral-bound 1965 edition of the Betty Crocker Boys and Girls Cookbook—my mother's childhood copy—I was introduced to the extraordinary notion that radishes could become roses.

I learned to carve thin petals into them and drop them into ice water, where they would blossom. I'd savor them with a little sprinkle of salt. There's nothing new about eating raw vegetables, but in the States it wasn't until the first half of the 20th century that an austere serving of celery sticks was recast as an opulent appetizer. The distinction is partly semantic: Fashionable French restaurants in America offered first-course relish plates of raw vegetables, referring to them in their native tongue (the word crudité itself is French for “rawness,” though the presentation may include cooked or cured ingredients), and the term caught on. Sweet Potato Tipsy Recipe. Enlarge Credit: James Baigrie SERVES 6 - 8 This is our adaptation of a Louisiana family recipe from How America Eats, by Clementine Paddleford, (Scribner,N.Y.,1960). 8 medium sweet potatoes2 pinches of salt7 tbsp. butter1⁄2 cup half and half1⁄4 cup dry sherry3 tbsp. brown sugar.

Superb Sides - Photo Gallery. Thanksgiving Side Dishes - Photo Gallery. Pumpkin-Leek Stuffing. Thanksgiving recipe swap. Thai steamed pumpkin custard Most of the people in my family live in Bangkok, where I was born and raised. With the majority of my American friends celebrating Thanksgiving with their respective families, I usually end up getting together with those who also come from other countries and who have no extended families nearby. Therefore, Thanksgiving feasts have always been about people from various parts of the globe sharing international, home-style dishes. In keeping with this theme, I serve an easy, deconstructed version of Thai steamed pumpkin custard, either instead of or in addition to traditional pumpkin pie.

Flaming Punch Recipe. Enlarge Credit: James Oseland (Punschglühbowle) The name of this flaming red wine punch translates from the German as punch glow bowl. This recipe is based on one in the 1905 collection Coolers and Punches from the German Army's Maneuvers and Field Deployment. Cocktails for Fall.