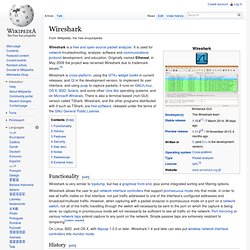 It is used for network troubleshooting, analysis, software and communications protocol development, and education. Originally named Ethereal, in May 2006 the project was renamed Wireshark due to trademark issues.[4] Functionality[edit] Wireshark is very similar to tcpdump, but has a graphical front-end, plus some integrated sorting and filtering options.

Wireshark allows the user to put network interface controllers that support promiscuous mode into that mode, in order to see all traffic visible on that interface, not just traffic addressed to one of the interface's configured addresses and broadcast/multicast traffic. On Linux, BSD, and OS X, with libpcap 1.0.0 or later, Wireshark 1.4 and later can also put wireless network interface controllers into monitor mode. History[edit] In the late 1990s, Gerald Combs, a computer science graduate of the University of Missouri–Kansas City, was working for a small Internet service provider. Hello World · GitHub Guides. The Hello World project is a time-honored tradition in computer programming. 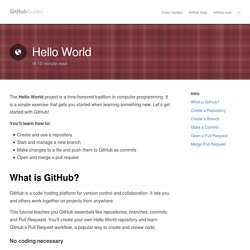 It is a simple exercise that gets you started when learning something new. Let’s get started with GitHub! You’ll learn how to: Create and use a repository Start and manage a new branch Make changes to a file and push them to GitHub as commits Open and merge a pull request What is GitHub? GitHub is a code hosting platform for version control and collaboration. This tutorial teaches you GitHub essentials like repositories, branches, commits, and Pull Requests. No coding necessary To complete this tutorial, you need a GitHub.com account and Internet access. Tip: Open this guide in a separate browser window (or tab) so you can see it while you complete the steps in the tutorial. 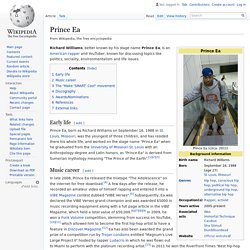 Early life[edit] Prince Ea, born as Richard Williams on September 16, 1988 in St. I Am NOT A Label. Why your company should have a Freaky Friday — Recurring Revenue by ChartMogul. For me, those two Freaky Friday hours on a Friday morning are the point of the week that I most look forward to in the ChartMogul Marketing team. 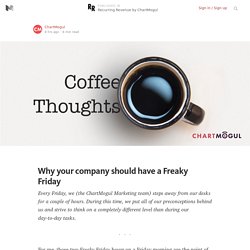 It’s a time when each of us has an enforced reason for stepping away from their laptop screen, to take a couple of hours and gain some perspective on the why, as well as the high-level ‘what’. I asked Annie, our Content Manager, for her input on what the session means for her: “For me it’s great to step outside of the Content Calendar, which otherwise rules activity and directs focus, and into a wide open space with room enough for the big picture. There are no limits. There you can stretch! The core rules of Freaky Friday. Shares your slides online. Prince's vision for lifting up black youths: Get them to code - Apr. 21, 2016. It was this belief that inspired Prince's friend Van Jones to start YesWeCode, a nonprofit in Oakland, which is at the forefront of a movement to get more young minorities involved in technology. 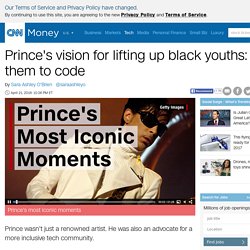 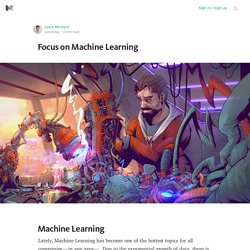 Due to the exponential growth of data, there is a huge economic and strategic interest to be able to extract every ounce of information from it; with the promise of understanding user needs, predicting actions, and proposing the most accurate content. Linkin Bark - Numb. How to Create Gmail Tasks - Captain Time. I log into Gmail every morning to see what new requests I have received overnight from my clients. 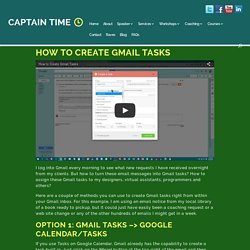 But how to turn these email messages into Gmail tasks? How to assign these Gmail tasks to my designers, virtual assistants, programmers and others? 10 Priceless Resources for JavaScript Learners — JavaScript Scene. Online calculator measures impact of $15 wage. The Google Computer Science Education in Media Fellowship Call for Submissions. The Black List is pleased to partner with Google’s Computer Science Education in Media program to offer financial grants in support of the development of three scripts with a focus on changing the image in popular culture of computer science and computer scientists. 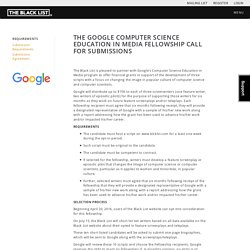 Google will distribute up to $15K to each of three screenwriters (one feature writer, two writers of episodic pilots) for the purpose of supporting those writers for six months as they work on future feature screenplays and/or teleplays. Each fellowship recipient must agree that six months following receipt, they will provide a designated representative of Google with a sample of his/her new work along with a report addressing how the grant has been used to advance his/her work and/or impacted his/her career. Beginning April 20, 2016, users of the Black List website can opt into consideration for this fellowship. 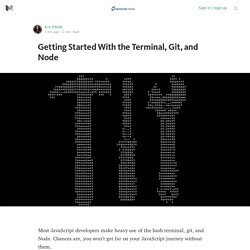 Chances are, you won’t get far on your JavaScript journey without them. Node will be used for both server-side and client-side programming in JavaScript, and npm, which comes with Node, is the standard package manager for JavaScript, meaning that it’s how you’ll access all the open source libraries available for use in your projects. Git keeps track of changes to source code over time, and helps you share those changes and collaborate with other developers. GitHub is the website most JavaScript developers use to coordinate work on Git repositories using the integrated issue tracker, and peer code reviews with pull requests. 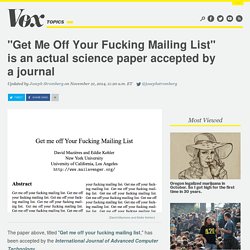 Let us explain. The journal, despite its distinguished name, is a predatory open-access journal, as noted by io9. These sorts of low-quality journals spam thousands of scientists, offering to publish their work for a fee. In 2005, computer scientists David Mazières and Eddie Kohler created this highly profane ten-page paper as a joke, to send in replying to unwanted conference invitations.

How They Code: Programming Languages Used by Well-Known Tech Companies. Software Engineering: Lucrative and Specialized Writing great software is both an art and science. It's also highly lucrative. According to PayScale, "the average pay for a software engineer is $79,357 per year. " Software engineers in San Francisco with 10 to 20 years of experience make a median salary of $131K.

Juniper Networks pays an average base salary of $159,990 to their software engineers. But all software engineers are not created equal. Languages have Unique Strengths. YG & Nipsey Hussle "FDT (Fuck Donald Trump)" (WSHH Exclusive - Official Music Video) Watch Out For A Slack IPO Starting From Late 2016. The group-messaging app Slack aims to revolutionize the way employees in organizations communicate.Slack has attracted a lot of attention and investment interest and is the fastest startup to reach a $2B valuation.With around $340M in cash and an unreasonable valuation, it is still early for a Slack IPO.Investors should keep an eye out for the Slack IPO, which might be the hottest IPO in 2017.

The enterprise chat app Slack is one of the hottest startups today and is a prominent IPO candidate. The Vancouver-based startup was founded in 2009 by ex-Flickr founder Stewart Butterfield as a social gaming company. He raised more than $17M for that cause. However, in 2012, only one year after the original launch date of Glitch, when the company’s flagship social game was about to launch, it decided to shut down its gaming business and turn the business around. Two new secret Slack commands appear, good luck with work. Last year we wrote about secret Slack Giphy commands that let you do all sorts of weird things with GIFs without ever leaving your chat window, and now there are more.

Friday in the Quillen Arena on the fairgrounds, according the the Trump website. Place-Making and Re-imagining the City of Wilmington: Creating New Economic & Social Value through Real Estate Innovation Tickets, Thu, Apr 21, 2016 at 8:00 AM. Rebuilding downtrodden neighborhoods. Delaware real estate advisor and Carey School of Business student David Wilk hopes to bring the CityLab program to Wilmington.

The program is currently working to reimagine the Jonestown area of Baltimore. Daniel Sato/The News Journal Redevelopment strategies often lack the vision to turn dilapidated neighborhoods into desirable places where people of all income levels can and want to live together. FOLLOW YOUR DREAMS. Final Fantasy VII Summons. US Uncut. Abigail & Brittany Hensel - The Twins Who Share a Body. Tesla AutoPilot: 45 Minute Commute Made EASY!! Johns Hopkins to introduce CityLab program in Wilmington.

Inside the Fall of SunEdison, Once a Darling of the Clean-Energy World. One Googler’s take on managing your time. How to Screen Print: What is Plastisol Ink? Where do you buy YOUR custom plastisol transfers? - a list of vendors! SingleStep Heat Transfer Laser Paper. SingleStep Weed-Less, heat transfer laser paper transfers the toner, not the background film! DIGITIZE And Create EMBROIDERY Files - Easily AND For FREE - Tutorial .PES .JPG Etc. How to Applique Machine Embroidery.

Bing just became the best search engine for developers. DataTau. Machine Learning: An In-Depth, Non-Technical Guide. Some quotes from Robert Harper. Koekeishiya/the-art-of-command-line: Master the command line, in one page. WHAT IS EXTREME OWNERSHIP? - Jocko Willink on London Real. R for Data Science. How to be a modern… by Jeffrey Leek. Runnr. Falcon 9 users guide rev 2.0. An Error Occurred Setting Your User Cookie. Google reportedly considering possibility of Swift as programming language for Android. How my parents taught me about finances — Life Learning. Coming of Age in the Other America Investigates Why Promising Baltimore Students Don't Escape Poverty.

From Professional Soccer Player to Silicon Valley Software Engineer: Here’s My Story. SK-II: Marriage Market Takeover (Please turn on subtitle) Convert a drawing into vector artwork in Adobe Illustrator. Donald Trump 2016: Where the Trump Show Is a Dark Flashback. What is Blockchain? — Badge Chain. The Blockchain for Education: An Introduction. Sorry, developer bootcamps: I was wrong. Colleges are full of it: Behind the three-decade scheme to raise tuition, bankrupt generations, and hypnotize the media. Start-Ups Aim at Overlooked Demographic: The Unbanked. The Evolution of Fintech. The Evolution of Fintech. BABYMETAL Makes Their U.S. Television Debut. Software Engineering Radio. Articles populaires correspondant à watercolor art print. CRISPR: a genetic cut and paste tool. Jason Zweig: "The Devil's Financial Dictionary and The Intelligent Investor" Building a 32-Thread Xeon Monster PC for Less Than the Price of a Haswell-E Core i7.