The Solar Satellite: Sync Log: Valhalla on the Hudson (UPDATED) Note: The Sync Log is a data dump of correspondences connecting the world of symbols to the world of consensus reality. The reader is encouraged to make their own decisions as to the ultimate meaning of it all. Last week on The Secret Sun I looked at the news that The X-Files was returning to TV and tried to unpack the recent revelations that the 1997 Heaven's Gate cult suicides may well have been inspired by an episode of that series, the Mytharc mindbomb, "Red Museum. " Specifically, the Gate may have seen themselves as "walk-ins", wandering alien spirits who take possession of human beings who have reached a crisis in their lives and have lost the will to live. Dakota Fanning in Taken At the end of all this was the Super Bowl, which had Katy Perry (nee Hudson) perform a halftime show filled with the usual, now-tired symbolic provocations, including a recreation of the Scarlet Woman riding the Beast of Revelations (note flaming dress).

Or Heaven's Gate. Click to enlarge 4 and 3+3+3=9. Source of The Kybalion in Anna Kingsford’s Hermetic System. A book called The Kybalion: A Study of the Hermetic Philosophy of Ancient Egypt and Greece by Three Initiates was published in Chicago in 1912. 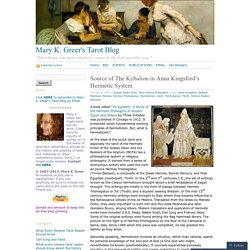 It presented seven fundamental working principles of Hermeticism. But, what is Hermeticism? At the base of the occult tarot and especially the tarot of the Hermetic Order of the Golden Dawn and the Builders of the Adytum (BOTA) lies a philosophical system or religious philosophy. It derives from a series of anonymous writers who used the nom de plume Hermes Trismegistus (Thrice-Blessed), a composite of the Greek Hermes, Roman Mercury, and their Egyptian counterpart, Thoth. In the 2nd and 3rd centuries C.E., the set of writings known as the Corpus Hermeticum brought about a brief renaissance of pagan thought. Generally speaking, Hermeticism involves an intuitive, rather than rational, search for personal knowledge of the soul and of God (a One God who might, nevertheless be known polytheistically). 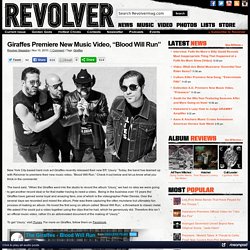 Today, the band has teamed up with Revolver to premiere their new music video, “Blood Will Run.” Check it out below and let us know what you think in the comments! The band said, “When the Giraffes went into the studio to record the album ‘Usury,’ we had no idea we were going to get another record deal or for that matter having to need a video. LEARN ASTROLOGY: Free Step-by-Step Lessons & Exams. Step-by-Step Its fun and easy to learn astrology if you take it one step at a time. 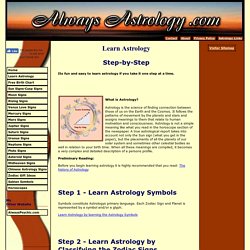 Bill Hicks - anger with humour. A few words about the late Bill Hicks will fit in well this week. 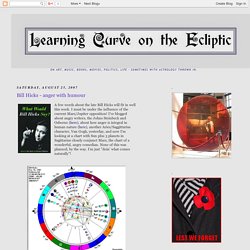 I must be under the influence of the current Mars/Jupiter opposition! I've blogged about angry writers, the Johns Steinbeck and Osborne (here), about how anger is integral in human nature (here), another Aries/Saggittarius character, Van Gogh, yesterday, and now I'm looking at a chart with Sun plus 3 planets in Sagittarius closely conjunct Mars, the chart of a wonderful, angry comedian. None of this was planned, by the way. I'm just "doin' what comes naturally"! (12 noon chart - no birth time available). When I first came to the USA I'd never heard of Bill Hicks, in spite of the fact that he had made some very successful appearances in the UK . Just this week we listened on-line to an excellent BBC programme about Bill's life.