What Leaders Can Learn From Game Design, Part 1: Autonomy. I first thought that my game design background and using brain science to thrive at work had little to do with each other; wow was I wrong! 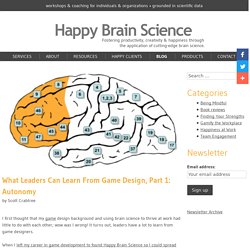 It turns out, leaders have a lot to learn from game designers. When I left my career in game development to found Happy Brain Science so I could spread the science of happiness, I figured I was leaving my game development background behind. But one of our newsletter subscribers along the way recommended I read the book Glued to Games by Scott Rigby and Richard M. Ryan. Whoever you were (maybe someone in a class at Blizzard Entertainment?)

Glued to Games connected my worlds; and it can connect your worlds too, if you’ve ever enjoyed a game, and you work with others. Autonomy at first seems straight-forward: don’t micro-manage people; provide choices. First of all, not all choices are created equally. You might be thinking “Wait, one option doesn’t deliver autonomy!” What Leaders Can Learn From Game Design, Part 2: Relatedness. (Note: This is part 2 of a 3 part series on what you can learn from game designers. 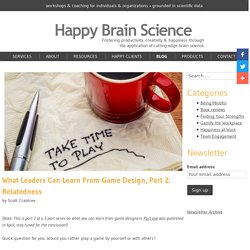 Part one was published in April, stay tuned for the conclusion!) Quick question for you: Would you rather play a game by yourself or with others? Self-determination Theory suggests that Autonomy, Relatedness, and Mastery are vital human motivators, whether we are talking about working in the office or playing a video game. Every brain in the world is different, but for most of us most of the time, we would rather play games with others than alone.

As the title of a just-published study puts it, “Fun is more fun when others are involved“. The best games not only get people playing together, but get them interacting more with each other. When I was designing Choose Happiness @ Work, a key turning point was when I realized that players should be able to openly debate which solutions are the best. What Leaders Can Learn From Game Design, Part 3: Mastery. (Note: This is part 3 in a series on Gamification: Embedding elements of game playing to the workplace to encourage engagement . 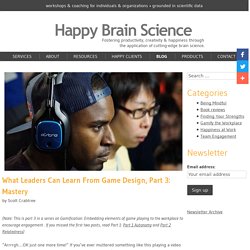 If you missed the first two posts, read Part 1: Part 1 Autonomy and Part 2 Relatedness) “Arrrrgh…OK just one more time!” What Leaders Can Learn From Game Design, Part 4: Surprise! Please think of the last time you were pleasantly surprised. 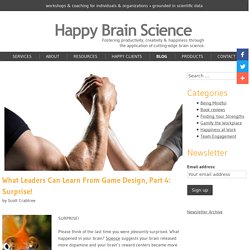 What happened in your brain? Science suggests your brain released more dopamine and your brain’s reward centers became more active because you didn’t expect what happened. What does this have to do with ‘gamification‘ and leadership? Video games frequently–but unpredictably, of course–use surprise to engage players and get them ‘hooked’. Leaders can learn from game designers to better engage colleagues and stakeholders. Choose Happiness @ Work. Do you ever wish your workplace was a little happier? 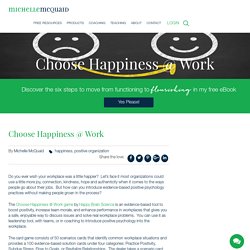 Let’s face it most organizations could use a little more joy, connection, kindness, hope and authenticity when it comes to the ways people go about their jobs. But how can you introduce evidence-based positive psychology practices without making people groan in the process? The Choose Happiness @ Work game by Happy Brain Science is an evidence-based tool to boost positivity, increase team morale, and enhance performance in workplaces that gives you a safe, enjoyable way to discuss issues and solve real workplace problems. You can use it as leadership tool, with teams, or in coaching to introduce positive psychology into the workplace.

Improvisational Theatre. Books. Rules of Play. Structure[edit] Rules of Play expresses the perspective that a theoretical framework for interactive design has not yet been established. 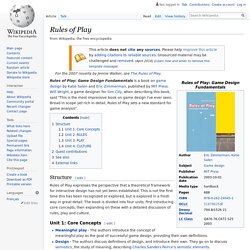