OTR - XMPP WIKI. Warning. Even though we're doing our best to offer you good tools to protect your privacy while using a computer, there is no magic or perfect solution to such a complex problem. 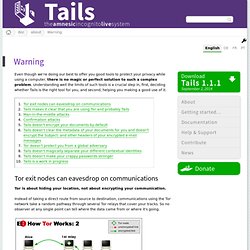 Understanding well the limits of such tools is a crucial step in, first, deciding whether Tails is the right tool for you, and second, helping you making a good use of it. Tor is about hiding your location, not about encrypting your communication. Instead of taking a direct route from source to destination, communications using the Tor network take a random pathway through several Tor relays that cover your tracks. So no observer at any single point can tell where the data came from or where it's going.

The last relay on this circuit, called the exit node, is the one that establishes the actual connection to the destination server. Switch to HTTPS Now, For Free. Attention: In the wake of Heartbleed: if you're already using a certificate you installed before April 7, 2014, revoke that certificate, then issue and install a new one. 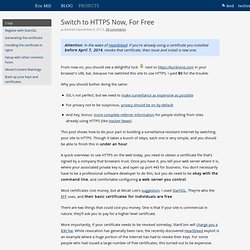 From now on, you should see a delightful lock next to in your browser's URL bar, because I've switched this site to use HTTPS. I paid $0 for the trouble. The Web never forgets: Persistent tracking mechanisms in the wild. Switch to HTTPS Now, For Free. How to obtain and install an SSL/TLS certificate, for free. Anyone operating a server on any scale should want a digital certificate to encrypt data between clients and services, whether for personal, office, or public use. 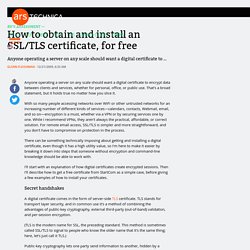 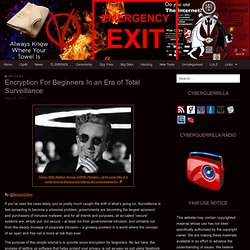 Surveillance is fast spreading to become a universal problem, governments are becoming the largest sponsors and purchasers of intrusive malware, and for all intents and purposes, all so-called “secure” systems are, simply put, not secure – at least not from governmental intrusion, and certainly not from the steady increase of corporate intrusion – a growing problem in a world where the concept of an open and free net is more at risk than ever. The purpose of this simple tutorial is to provide some encryption for beginners. No lies here, the process of setting up software that helps protect your privacy, is not as easy as just using facebook or installing an ordinary browser.

It takes a little (but not much) work. This is not a tutorial on hacking. A couple of points before you proceed. Let’s Begin The Tor Project. Fact or Fiction: Encryption Prevents Digital Eavesdropping. Since the dawn of the Web and ubiquitous free e-mail services over the past two decades, the need to secure personal information online has been evident but often ignored. 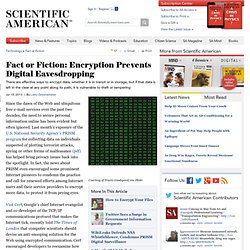 Last month’s exposure of the U.S. National Security Agency’s PRISM program for collecting data on individuals suspected of plotting terrorist attacks, spying or other forms of malfeasance (pdf) has helped bring privacy issues back into the spotlight. In fact, the news about PRISM even encouraged some prominent Internet pioneers to condemn the practice and call for renewed efforts among Internet users and their service providers to encrypt more data, to protect it from prying eyes. Vint Cerf, Google’s chief Internet evangelist and co-developer of the TCP/IP communications protocol that makes the Internet tick, recently told The Times of London that computer scientists should devise an anti-snooping solution for the Web using encrypted communication. Tor Project: Anonymity Online.

Hash Generator. 2014: The year of encryption. 9 January 2014Last updated at 19:05 ET By Paul Rubens Technology reporter Companies are under pressure in the current environment to make sure their encryption is up to scratch "The solution to government surveillance is to encrypt everything. " So said Eric Schmidt, Google's chairman, in response to revelations about the activities of the US National Security Agency (NSA) made by whistle-blower Edward Snowden.

Schmidt's advice appears to have been heeded by companies that provide internet-based services. They Cracked This 250-Year-Old Code. For more than 200 years, this book concealed the arcane rituals of an ancient order. 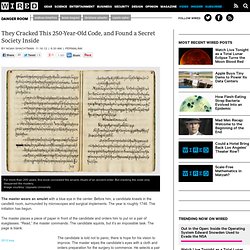 But cracking the code only deepened the mystery.Image courtesy: Uppsala University The master wears an amulet with a blue eye in the center. It's Time to Encrypt Our Genomes. The next time your privacy is invaded might not involve text messages, web browsing histories, or hidden cameras—it could involve the very stuff that makes you you. 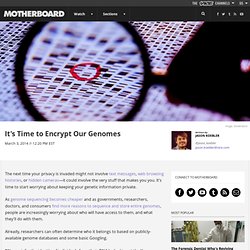 It’s time to start worrying about keeping your genetic information private. As genome sequencing becomes cheaper and as governments, researchers, doctors, and consumers find more reasons to sequence and store entire genomes, people are increasingly worrying about who will have access to them, and what they’ll do with them. Already, researchers can often determine who it belongs to based on publicly-available genome databases and some basic Googling. Dogecrypt 0.0.2.