Florida Imam With Past FBI Links Accused of Terrorism. On August 23, 2011, 46-year-old Marcus Dwayne Robertson, the imam of an Orlando, Florida mosque, was arrested, imprisoned and charged with possession of a firearm by a convicted felon. 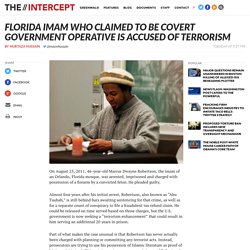 He pleaded guilty. Environmental Activist Who FBI Entrapped & Charged with ‘Eco-Terrorism’ is Released Over Withheld Evidence. A 37-year-old environmental activist, who was convicted of “eco-terrorism” in 2007 and sentenced to 19 years in prison in 2008, has been released from jail after he uncovered evidence that the federal government withheld documents that would have been useful to his defense at trial. 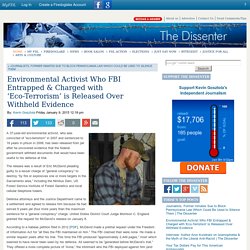 The release was a result of Eric McDavid pleading guilty to a lesser charge of “general conspiracy” to destroy “by fire or explosives one or more targets in the Sacramento area,” including the Nimbus Dam, US Forest Service Institute of Forest Genetics and local cellular telephone towers. Defense attorneys and the Justice Department came to a settlement and agreed to release him because he had served 9 years jail (four more years than the maximum sentence for a “general conspiracy” charge. United States District Court Judge Morrison C. Microsoft Ireland Case: Can a US Warrant Compel A US Provider to Disclose Data Stored Abroad?

The animating question in this case is whether a U.S. law enforcement agency can compel a U.S. provider of communications service to disclose the content of digital information the provider stores outside the U.S. 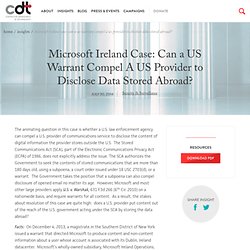 The Stored Communications Act (SCA), part of the Electronic Communications Privacy Act (ECPA) of 1986, does not explicitly address the issue. The SCA authorizes the Government to seek the contents of stored communications that are more than 180 days old, using a subpoena, a court order issued under 18 USC 2703(d), or a warrant. The Government takes the position that a subpoena can also compel disclosure of opened email no matter its age. However, Microsoft and most other large providers apply U.S. v. U.S. District Court Rules Iran Behind 9/11 Attacks. U.S. 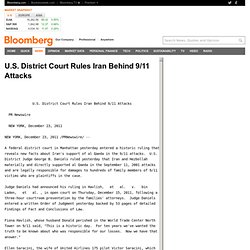 11th Circuit – (Re Constitutionality of Obamacare) Would Proposed Federal Shield Law Have Protected New York Times Reporter James Risen? New York Times reporter James Risen at “Obama’s War on Leaks” panel at the National Press Club in May 2012 A proposed federal shield law that would grant journalists covered by the legislation a level of protection has passed in the Senate Judiciary Committee and moved to the full Senate. 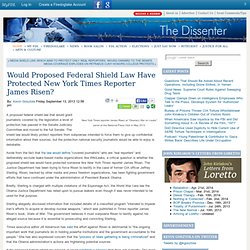 The shield law would likely protect reporters from subpoenas intended to force them to give up confidential information about their sources, but the protection national security journalists would be able to enjoy is debatable. Judge says Ohio bomb plot amounted to terrorism, making 3 men subject to harsher sentences. CLEVELAND – Three men who pleaded guilty in a plot to bomb a highway bridge should be sentenced as terrorists, making them subject to harsher prison terms, a federal judge ruled Wednesday. 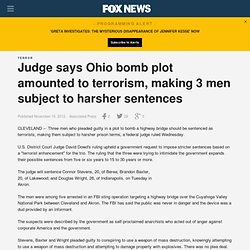 U.S. District Court Judge David Dowd's ruling upheld a government request to impose stricter sentences based on a "terrorist enhancement" for the trio. The ruling that the three were trying to intimidate the government expands their possible sentences from five or six years to 15 to 30 years or more. The judge will sentence Connor Stevens, 20, of Berea; Brandon Baxter, 20, of Lakewood; and Douglas Wright, 26, of Indianapolis, on Tuesday in Akron. The men were among five arrested in an FBI sting operation targeting a highway bridge over the Cuyahoga Valley National Park between Cleveland and Akron. The suspects were described by the government as self-proclaimed anarchists who acted out of anger against corporate America and the government. 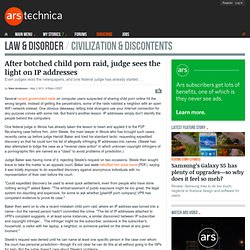 Instead of getting the perpetrators, some of the raids nabbed a neighbor with an open WiFi network instead. One obvious takeaway: letting total strangers use your Internet connection for any purpose comes with some risk. But there's another lesson: IP addresses simply don't identify the people behind the computers. Federal Judge Allows Corporation To File Secret Lawsuit. Federal Case Could Make It Easier For Victims To Defend Themselves Against Civil Forfeiture.