Drones Are Now Appearing on Afghan Rugs. When it comes to what to depict on rugs, Afghan weavers traditionally turn to what’s most familiar. 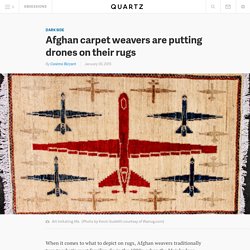 So in the 1980s, when the Mujahedeen were fighting back the Soviet occupation, some local weavers abandoned flowers and water jugs to illustrate what their days consisted of back then: war. Tanks, helicopters, Kalashnikovs, hand grenades and bazookas started creeping into the centuries-old tradition, either as elements of a landscape or as icons in a pattern. “My favorite one is an old Beluch style one,” says 49-year-old US entrepreneur Kevin Sudeith, “The design dates back to the 19th century but it has two helicopters and two tanks at each end of the rug.” In 1996, Sudeith discovered one of the war rugs in the house of an Italian architect and decided to start collecting them. Shortly after, he was dealing them, both online and in flea markets around New York for prices ranging from a few hundreds to several thousand US dollars each. 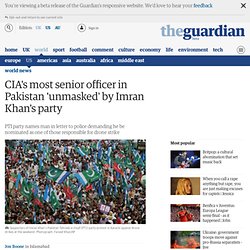 The Pakistan Tehreek-e-Insaf (PTI) party named a man it claimed was head of the CIA station in Islamabad in a letter to police demanding he be nominated as one of the people responsible for a drone strike on 21 November, which killed five militants including senior commanders of the Haqqani Network. John Brennan, the CIA director, was also nominated as an "accused person" for murder and "waging war against Pakistan".

The US embassy said it could not comment but was looking into the matter. The CIA spokesman Dean Boyd would not confirm the station chief's name and declined to immediately comment, AP reported. US "war on terror" - Afghanistan & Pakistan. Origins of C.I.A.’s Not-So-Secret Drone War in Pakistan. Pakistan Says U.S. Drone Strike Kills 4. Out of Sight, Out of Mind: A visualization of drone strikes in Pakistan since 2004. Afghanistan wants ISI to be declared a terror outfit, renews demand for its ban : Asia. Headlines Today Bureau | Headlines Today | New Delhi, March 7, 2013 | UPDATED 19:16 IST The Afghan National Security Council (NSC) has reportedly demanded that Pakistani spy agency Inter-Services Intelligence (ISI) be declared a terror outfit. 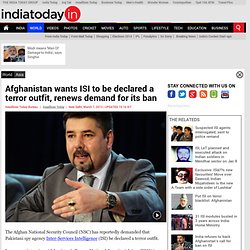 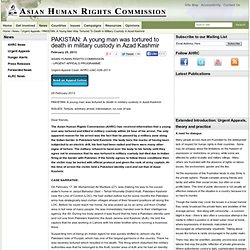 Malala's hope. US officials 'question Imran Khan on drones' - Central & South Asia. Imran Khan, the Pakistani cricketer turned politician, has been stopped by US immigration officials and questioned about his views on US drone strikes in his country, party officials have said. 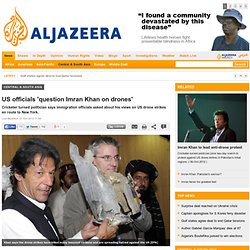 Khan, the leader of the Pakistan Movement for Justice party (PTI), has campaigned vociferously for an end to the controversial US campaign of missile strikes against suspected Taliban and al-Qaeda fighters in Pakistan's tribal areas. The 59-year-old, who was headed to New York, said he was stopped by US officials in Toronto on Friday. "I was taken off from plane and interrogated by US Immigration in Canada on my views on drones. My stance is known. Drone attacks must stop," he wrote on Twitter. Khan said the delay meant he missed his flight and a party fundraising lunch in New York, but insisted "nothing will change my stance". "My stand on drones is very clear. Protest march. Pakistani authorities halt anti-drone protest - Central & South Asia.

Pakistani authorities have stopped a protest over US drone strikes led by cricketer-turned-politician Imran Khan from entering the troubled region of South Waziristan, prompting allegations the government is ambivalent about US actions. 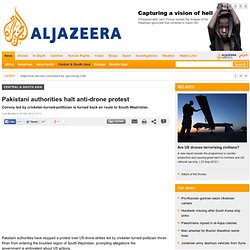 Khan, who started the protest on Saturday, blames the government for allowing the US to operate in the country and had planned to lead the march from the capital Islamabad into South Waziristan, a tribal area frequently hit by the drone strikes. But authorities on Sunday blocked the protesters' path with shipping containers on the highway. After several delays the army told protesters it was unsafe to be on the road after dark and they turned back. Pakistan's military and the civilian government publicly complain that the strikes - aimed at remnants of al-Qaeda andthe Taliban - infringe the country's sovereignty and cause civilian casualties. Yet the government has done little to stop them. "Are these people not humans? Pakistan: US women internationalists join tribal protest against US drone war.

M.guardian.co.uk. President Zardari: Save my daughter. 328,575 have signed. 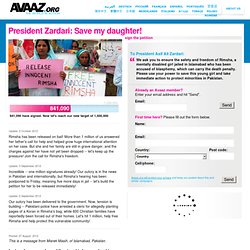 Now let's reach our new target of 1,500,000 Update: 2 October 2012 Rimsha has been released on bail! More than 1 million of us answered her father's call for help and helped grow huge international attention on her case. But she and her family are still in grave danger, and the charges against her have not yet been dropped -- let's keep up the pressure! Update: 3 September 2012 Incredible -- one million signatures already!

Update: 2 September 2012. Shakil Afridi sentenced to 33 years in treason case. Osama bin Laden was killed in a raid by US Navy SEALS in Abbottabad, an operation Dr Shakil Afridi has been accused of assisting by providing information on Bin Laden's whereabouts through a fake anti-polio campaign in the city . 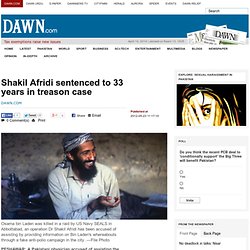 —File Photo PESHAWAR: A Pakistani physician accused of assisting the Central Intelligence Agency (CIA) in obtaining DNA samples of Osama Bin Laden through a fake vaccination campaign was, on Wednesday, convicted for involvement in anti-state activities by a tribal court, a senior government official said. "Dr Shakil Afridi was produced before a four-member tribal court Wednesday morning and was sentenced to 33 years in prison and also given a 3,20,000-rupee fine," Political Agent, Khyber tribal region, Mutahir Zeb Khan told Dawn.

Soon after his conviction, Afridi was sent to the Central Prison in Peshawar. Pakistan: Unpacking an Anti-Censorship Campaign. When the ICT R&D fund in Pakistan announced a call for proposals earlier this year for a “National URL Filtering and Blocking System” inviting companies, academia and research institutions to bid; my reaction was of shock and disbelief. This Isn't a Hoax: Pakistan Requests Proposals for a National Filtering and Blocking System. The Pakistani government is looking for new ways to censor the Internet. 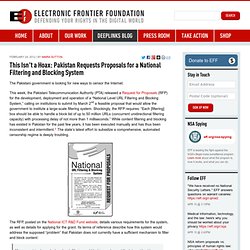 This week, the Pakistani Telecommunication Authority (PTA) released a Request for Proposals (RFP) for the development, deployment and operation of a “National Level URL Filtering and Blocking System,” calling on institutions to submit by March 2nd a feasible proposal that would allow the government to institute a large-scale filtering system.

Shockingly, the RFP requires: “Each [filtering] box should be able to handle a block list of up to 50 million URLs (concurrent unidirectional filtering capacity) with processing delay of not more than 1 milliseconds.” While content filtering and blocking has existed in Pakistan for the past few years, it has been executed manually and has thus been inconsistent and intermittent. The state’s latest effort to subsidize a comprehensive, automated censorship regime is deeply troubling. Pakistan to ban encryption software. Millions of internet users in Pakistan will be unable to send emails and messages without fear of government snooping after authorities banned the use of encryption software. 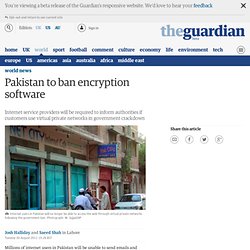 A legal notice sent to all internet providers (ISPs) by the Pakistan Telecommunications Authority, seen by the Guardian, orders the ISPs to inform authorities if any of their customers are using virtual private networks (VPNs) to browse the web. Virtual private networks allow internet users to connect to the web undetected, meaning that they can access banned websites and send emails without fear of government interception. Pakistan's 20 million internet users have previously been banned from popular social networks, such as Facebook, because of blasphemous material about the prophet Muhammad. Pakistan Internet Filtering and URL Blocking System Request for Proposal. Kashmir. Countering extremism in Pakistan. The bullet riddled bodies of nine more missing persons including one journalist were found. The disappearances and extrajudicial killings continue and not a single day goes by without the abduction and murder of activists.

The family members of disappeared persons who were holding a protest meeting and token hunger strike outside the Quetta Press Club at the capital of Balochistan province were warned by some plain clothed persons that they should wind up their meeting otherwise they would face serious problems. Since July 2010 to date, there have been 215 extrajudicial killings of missing persons. Occupy Lahore rally. Bashar al-Assad for president ... of Pakistan. Once again, Pakistan and the United States are in crisis mode. Admiral Mike Mullen, the outgoing US Chairman of the Joint Chiefs of Staff, has publicly accused the Pakistani intelligence service, the ISI, of acting in league with the so-called Haqqani Network, which the US deems responsible for the recent attack on its embassy compound in Kabul, merely the latest of a string of alleged outrages.

This has precipitated the usual round of recriminations, with the US threatening to take unilateral action against the Haqqanis on the Pakistani side of the Durand Line, the Pakistanis vowing to defend their sovereignty, and the American Congress making the usual noises about curtailing and further conditioning grants of aid to its duplicitous Pakistani ally.

Another pathologist claimed the assailants kept him hitting even after he succumbed to injuries. While medical officer, in the post-mortem report remarked: “The deceased died due to multiple injuries - from 1 to 17 - which caused rupture of both lungs, liver and fractured 6th rib on left side, 9th rib on right side caused death. Pakistan and the Mumbai Attacks: The Untold Story. Gavriel and Rivka Holtzberg had come to India on a religious mission. Trial Testimony Intensifies Allegations Pakistan is Playing Double Game. David Coleman Headley, a confessed Pakistani-American terrorist, alleges that Pakistani officers played a central role in reconnaissance and planning for the 2008 Mumbai attacks. This report is part of a ProPublica and PBS FRONTLINE [1] investigation. Latest news, Breaking news, Pakistan News, World news, business, sport and multimedia. South Asia news, business and economy from India and Pakistan. Karachi Journal - Pakistanis Find Success in Fetish Business.