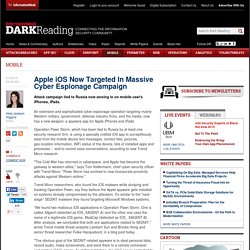 An extensive and sophisticated cyber espionage operation targeting mainly Western military, government, defense industry firms, and the media, now has a new weapon: a spyware app for Apple iPhones and iPads. Operation Pawn Storm, which has been tied to Russia by at least one security research firm, is using a specially crafted iOS app to surreptitiously steal from the mobile device text messages, contact lists, pictures, geo-location information, WiFi status of the device, lists of installed apps and processes -- and to record voice conversations, according to new Trend Micro research. Apple MacBook Users, Meet Thunderstrike: New Nightmare Malware for You and Your Laptop.

MacBook users are not safe from Thunderstrike, a new malware that is difficult to remove. 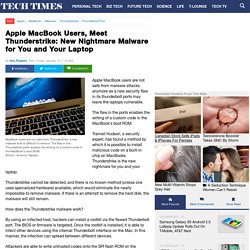 The Teacher's Guides To Technology And Learning. Welcome to the official guide to technology and learning by Edudemic! 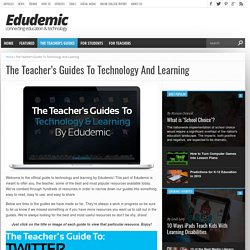 This part of Edudemic is meant to offer you, the teacher, some of the best and most popular resources available today. Computer Virus Information. What is a computer virus? 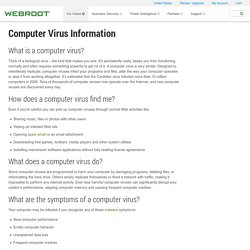 Think of a biological virus – the kind that makes you sick. It’s persistently nasty, keeps you from functioning normally and often requires something powerful to get rid of it. A computer virus is very similar. Designed to relentlessly replicate, computer viruses infect your programs and files, alter the way your computer operates or stop it from working altogether. It’s estimated that the Conficker virus infected more than 10 million computers in 2009. How does a computer virus find me? The Five Biggest Threats to Your Kids’ Privacy, and What You Can Do About Them. Remember back in school, when your teachers warned that everything you did would go on your permanent record?

It turns out your teachers have become right. That permanent record is the Internet. It’s hard to be a fully functioning adult in 2014 and not leave behind a digital trail. Now imagine how hard it is for your kids, who have never known a world where the net did not exist. From the moment they emerge from the womb, they’re generating data, which is then eagerly absorbed and stored by Internet companies, government agencies and some evil no-goodniks.

Despite federal laws prohibiting the collection of data from children under the age of 13, dossiers are constantly being created about your kids, whether it’s Google capturing their search histories, advertisers creating profiles of their interests, or their grandparents tagging photos of them on Facebook. 10 ways schools are teaching internet safety. "The student’s job is to figure out which website is the hoax. 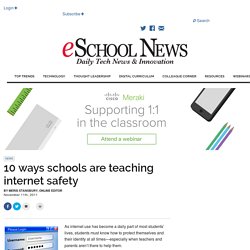 After students have looked at all three websites and figured out which one is the hoax, they share what they found with their classmates," says one reader in describing a hands-on lesson. Big Brother goes to school. Parents expect schools to keep track of their kids. 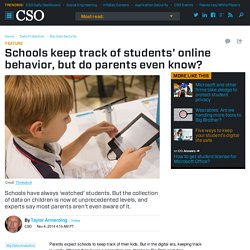 But in the digital era, keeping track is vastly different than it was a generation ago, thanks to Big Data analytics. According to its advocates, this is a very good thing. Gathering individual information on students can lead to “personalized” and “adaptive” learning platforms. The Teacher's Guide To Keeping Students Safe Online. This is the second in a series of online safety discussions. 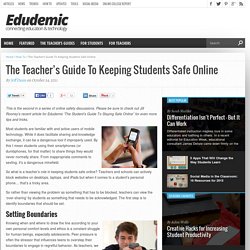 Please be sure to check out Jill Rooney’s recent article for Edudemic ‘The Student’s Guide To Staying Safe Online” for even more tips and tricks. Most students are familiar with and active users of mobile technology. While it does facilitate sharing and knowledge exchange, it can be a dangerous tool if improperly used. Education World: Keeping Kids Safe Online. As educators, our primary focus must be on helping young people develop effective filtering and blocking systems that reside in the hardware that sits on their shoulders. 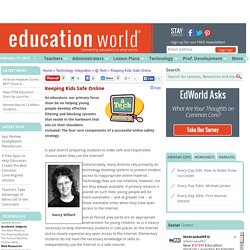 Included: The four core components of a successful online safety strategy. Is your district preparing students to make safe and responsible choices when they use the Internet? Unfortunately, many districts rely primarily on technology blocking systems to prevent student access to inappropriate online material. Technology fixes are not infallible, however, nor are they always available. If primary reliance is placed on such fixes, young people will be more vulnerable -- and at greater risk -- at those inevitable times when they have open access to the Internet.

Just as fenced play yards are an appropriate environment for young children, so is it clearly necessary to keep elementary students in safe places on the Internet and to closely supervise any open access to the Internet. Privacy and Internet Safety Topic Center. Privacy and Internet Safety Topic Center. How to Keep Your Personal Information Secure. Protecting your personal information can help reduce your risk of identity theft. 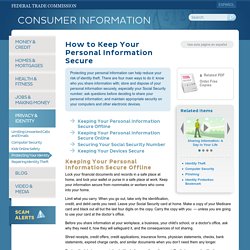 There are four main ways to do it: know who you share information with; store and dispose of your personal information securely, especially your Social Security number; ask questions before deciding to share your personal information; and maintain appropriate security on your computers and other electronic devices. Keeping Your Personal Information Secure Offline. Protect Your Mobile Device: Online Security Center. Mobile devices are small and lightweight, easy to carry with you — and also easy to misplace and lose. Watch this video to learn how to play it safe with mobile devices. This content requires the Adobe Flash Player. <a href=" Flash</a> Here are some good practices you can use with any mobile device. Click here for specific tips to keep your Apple or Android device protected. Secure your device. Identity Theft & Fraud.

"But he that filches from me my good name/Robs me of that which not enriches him/And makes me poor indeed. "- Shakespeare, Othello, act iii. Identity Theft. Does Cybercrime Really Cost $1 Trillion? National Security Agency Director Gen. Keith Alexander speaks about cybersecurity and the new threats posed to the U.S. economy and military at the American Enterprise Institute in Washington, D.C., on July 9, 2012. (Chip Somodevilla/Getty Images) These estimates have been cited on many occasions by government officials, who portray them as evidence of the threat against America. Hackers steal directly from banks in 'new era' of cyber crime. An international band of cyber crooks that worked its way into dozens of banks has experts warning of a "new era" of cyber crime where criminals steal directly from banks instead of their customers.

And the problem could soon spread to other industries, experts warn. On Monday, Moscow-based security firm Kaspersky Lab released a report showing that a gang of international hackers have stolen as much as $1 billion from 100 banks across 30 countries by installing malware that allowed them to take control of the banks' internal operations.

While such hacks have been attempted before, the scale and sophistication of the attacks, which spanned several nations over several years, has experts worried that this represents a new trend. "The recent news of bank thefts around the world is an example of the new normal in terms of cyber attacks leveraging insider threats," says Eric Chiu, president and co-founder of HyTrust, a cloud services company. What is Cyber Crime? Webopedia. Cyber Terrorism : The new kind of Terrorism. OUCH-201402_en.pdf. Information Systems & Technology. What is malware and how can we prevent it? Malware and Viruses. Protecting Student Privacy While Using Online Educational Services. A Starting Point for Ensuring Student Online Privacy.

Our society is struggling with issues regarding individual privacy. 8 Steps to Combat the Bullying Epidemic. October was National Bullying Prevention Month in the U.S. Teaching Digital Citizenship in the Elementary Classroom. As elementary level teachers, we are charged not just with teaching academics, but teaching social skills as well. The Path to Digital Citizenship. I've written and taught about digital citizenship for several years. Main Findings. 58% of teens have downloaded an “app” to their cell phone or tablet computer. As part of an ongoing collaboration with the Berkman Center for Internet & Society at Harvard University to study American teens’ technology use and privacy-related behaviors, the Pew Internet Project has undertaken a study that focuses specifically on youth use of mobile software applications or “apps,” using both a survey and focus group interviews.

The focus on apps in this study follows policy maker and advocates’ interest in the topic, as growing numbers of teens gain access to internet-enabled smartphones and tablet computers. The nationally representative survey of youth and parents finds that 58% of all U.S. teens ages 12-17 have downloaded a software application or “app” to their cell phone or tablet computer. Among American teens, 78% of teens have a cell phone and 23% of teens have a tablet computer; 82% own at least one of these mobile devices. Social Media at School: Teaching Safety on the Virtual Playground. These days, social media gets a pretty bad rap. Anne Collier: The Best Digital Citizenship Curriculum @coolcatteacher. Threat Encyclopedia.

Creative Commons. Location Based Safety Guide. What's The Big Deal About Internet Privacy? 10 Important Password Tips Everyone Should Know. What Your Students Really Need to Know About Digital Citizenship.