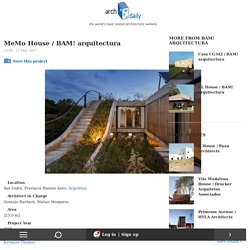 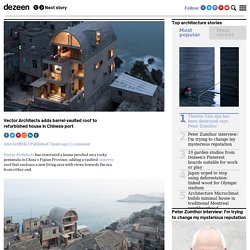 Captain's House is located in the village of Beijiao at the end of Huangqi Peninsula. The geology of the peninsula's cliffs means buildings are clustered along a narrow spine. Twenty years of exposure to damp and corrosive sea air had compromised the existing building's structure and caused serious leaks that needed to be addressed as part of the renovation process. Beijing-based Vector Architects was tasked with upgrading the house and making it better suited to modern family life. "Our design work starts with the study of structural reinforcement," said the studio. The addition of the new concrete wall allowed the architects to reconfigure the interior layout and provided the structural strength required to add the third storey to the existing building. 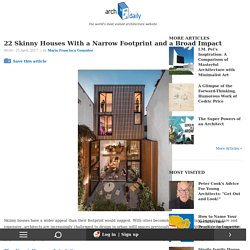 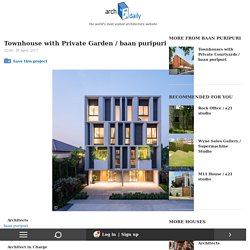 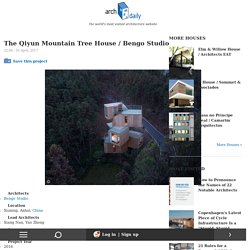 The Qiyun Mountain Tree House is located in the region of Xiuning County which is 33 kilometres south of Huangshan City, Anhui Province. Israeli architect couple use concrete blocks to build themselves a home among fruit trees. Architects Tamar Jacobs and Oshri Yaniv have built their own home on the Israeli coast, with its roof lifted up above concrete-block walls to offer glimpses of the sky. 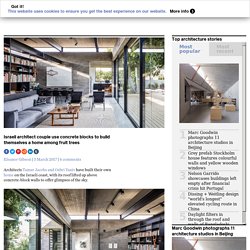 The co-founders of Israeli firm Jacobs-Yaniv Architects, who have two children together, designed the 200 square-metre house for a plot of land in Herzlia – a city on the Mediterranean coast, north of Tel Aviv. The architects' family had occupied the site for some years. But the couple wanted a light and airy new home, and also one that would allow them to enjoy the numerous fruit and nut trees growing there. The walls of concrete blocks – also known as breeze blocks – and the concrete roof are left exposed throughout the one-storey residence to create continuity between inside and outside. 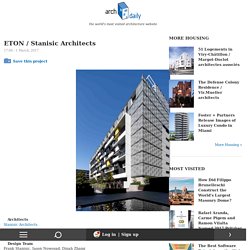 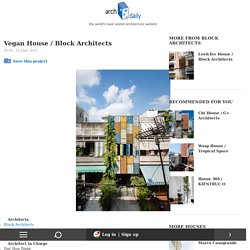 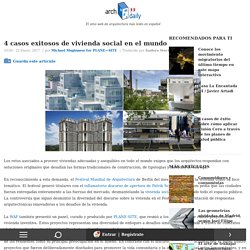 En reconocimiento a esta demanda, el Festival Mundial de Arquitectura de Berlín del mes pasado eligió la vivienda como su foco temático. Brillhart House. Casa Bahia. Before and After: This Dynamic Iranian House Has Rooms That Move at the Touch of a Button. Ever want to just move your room to the other side of the house when the sun starts to shine in your window?

h3ar: 'houses on the shelf' Aug 11, 2009 h3ar: 'houses on the shelf' ‘houses on the shelf’ by ryszard rychlicki of h3ar image courtesy ryszard rychlicki h3ar ryszard rychlicki of polish architectural firm h3ar received third prize in the london 800 competition for his concept ‘houses on the shelf’. rychlicki based his project on the notion if we treat a house like a product with a programmed product life, after the expiry of the guarantee period we may simply throw away. his design for london bridge is one which can be continually updated. the open work construction fulfils the function of shelves for houses as products, which after being used up (worn out) are replaced with new ones. mobile houses in the form of boxes – are executed from recycled materials and also glass and wood. due to the mobility of the entire layout premise the city may decide on its structure – number and type of homes in a given time.

Bridge Building Idea: Modular Mobile Green River Homes. The closer you come to the center of a city the more difficult it is to find unused space available for new construction, except perhaps at the cost of all-too-valuable public parks and other civic places. Building above and below bridges is thus of increasing interest to engaged urban designers around the world. Like products on shelves, this modular housing system is designed by h3ar to accommodate homes that are plugged into a grid, occupied for a period of time and then removed when necessary.

Much like cargo container architecture and other standardized systems, this design is meant for an ever-more-mobile as well as increasingly crowded world. Total Housing: Alternatives to Urban Sprawl. This book is conceived as evidence supporting the qualities of dense, urban living, and as a hopeful antidote against sprawl. Necessity and investigation are prerequisites for the design of housing: Total Housing refers to the need to understand that social, environmental, and economic factors affect form, and that living space is a base for our increasingly complex and varied societies. This new survey into multi - family housing focuses on the responses proposed by architects who are dealing with the dynamic and diverse demands of contemporary society. Featuring works by Lacaton - Vassal, BIG, + JDS, Sadar Vuga Arhitekti, Ryue Nishizawa, FOA, SHoP, and many emerging new architects, this volume is not a simple catalog, but rather a studied collection of inventive projects.