Social Delivery Service Nimber Set to Boost Sustainability of UK Delivery Sector. Having racked up over 10,000 deliveries and 30,000 members in its Scandinavian motherland since its 2013 launch, Norwegian social delivery service Nimber is set to plug a sustainability gap in the UK delivery sector, making use of unused capacity by using real people who are going somewhere anyway to make deliveries. 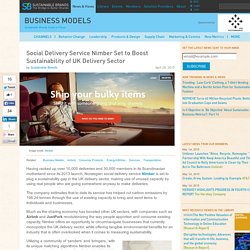 The company estimates that to date its service has helped cut carbon emissions by 198.24 tonnes through the use of existing capacity to bring and send items to individuals and businesses. Much as the sharing economy has boosted other UK sectors, with companies such as Airbnb and JustPark revolutionizing the way people apportion and consume existing capacity, Nimber offers an opportunity to circumnavigate businesses that currently monopolize the UK delivery sector, while offering tangible environmental benefits for an industry that is often overlooked when it comes to measuring sustainability.

Welcome SSUPSW Bihar. In India, bank for beggars is run by its members. The Post-Screen User Interface. No matter how interactive or dynamic, our digital experiences are limited by a constraint so fundamental that we barely think about it: the screen. 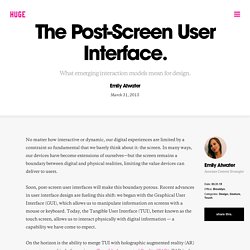 In many ways, our devices have become extensions of ourselves—but the screen remains a boundary between digital and physical realities, limiting the value devices can deliver to users. Soon, post-screen user interfaces will make this boundary porous. Recent advances in user interface design are fueling this shift: we began with the Graphical User Interface (GUI), which allows us to manipulate information on screens with a mouse or keyboard. 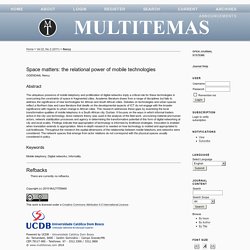 Academic literature draws from a range of disciplines but fails to address the significance of new technologies for African and South African cities. Paper: Internet Connectivity and Income Inequality (27th Annual Meeting) Friday, 3 July 2015: 11:15 AM TW1.3.01 (Tower One) Johannes M. 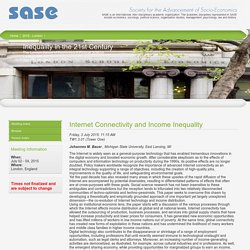 Bauer , Michigan State University, East Lansing, MI The Internet is widely seen as a general-purpose technology that has enabled tremendous innovations in the digital economy and boosted economic growth. 5 technologies that will transform shopping. The proliferation of smart devices and technologies and the pervasiveness of the Internet are changing way we live, work, play and shop. 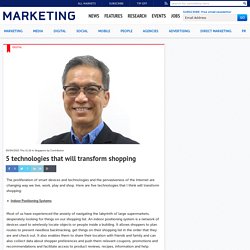 Here are five technologies that I think will transform shopping: Affective Computing: The Emotion Economy. Home: Simply a gesture: gestigon. Deep Links Yield Deep Data—But They Will Also Know A Lot About You - ReadWrite. Deep linking is hot, and for good reason: it can make mobile search much more powerful by making it more predictive. 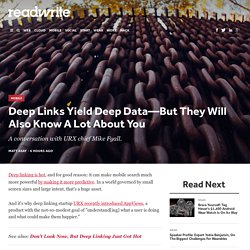 In a world governed by small screen sizes and large intent, that's a huge asset. And it's why deep linking startup URX recently introduced AppViews, a product with the not-so-modest goal of "understand[ing] what a user is doing and what could make them happier. " See also: Don't Look Now, But Deep Linking Just Got Hot To better understand not only AppViews but the innovative deep linking marketplace, and whether the increased intelligence buried in deep links will lead to privacy concerns, I sat down with URX marketing chief (and former Googler) Mike Fyall (@mikefyall).

Going Deep On Deep Links. Retail's new reality: Invisible shopping centers and virtual assistants—commentary. Using a mobile device while inside the store, and even before going to the store, plus after visiting a store, has becoming increasingly common. 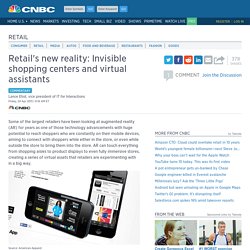 According to a study undertaken by Google and conducted by Media CT and Sterling Brands, their findings indicate that 87 percent of shoppers consult their mobile device for pre-shopping information, then 79 percent do so while shopping, and 35 percent do so post-shopping as a result of something that occurred during the shopping experience. Ironically, some shoppers are even becoming perhaps overly preoccupied with a mobile device while shopping. Even if shoppers are using a retailer's app, they may become more focused on their screens than the products around them. Dear SB Vanguard: What Does the Rise of Unconventional Business Models Mean for Established Brands? This is the latest in a series of posts in which we will poll our global community of business leaders and practitioners — the “SB Vanguard” — on a variety of issues pertinent to the evolving sustainable business landscape. 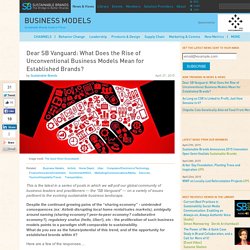 Despite the continued growing pains of the “sharing economy” - unintended consequences (ex: Airbnb disrupting local home rental/sales markets), ambiguity around naming (sharing economy? Peer-to-peer economy? Collaborative economy?) Michael Fertik: online reputation is becoming more valuable than money or power. My Google search for “Michael Fertik” returns a page of uncommon order and serenity, like one of those Japanese gardens where the gravel has been diligently raked into perfect swirls. 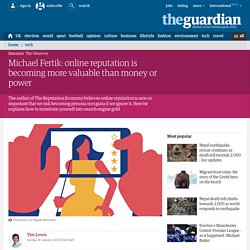 The first result is his personal website, then Wikipedia, Twitter and LinkedIn, followed by a couple of prestigious publications he contributes to (Bloomberg Businessweek, Forbes) and the Amazon page for his books. We learn instantly that Fertik is 36 years old, an American internet entrepreneur who is the founder and CEO of reputation.com. Photographs show a smiley man with rimless spectacles and a cascading black mane. News: Economy: Collaborative Consumption. Skip to main content Economy: Collaborative Consumption New Popular. 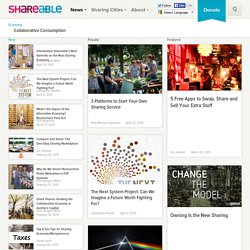 Airbnb gentrification: How the sharing economy drives up housing prices. Photo by Scott Halleran/Getty Images When I first began listing my one-bedroom adobe house in Marfa, Texas, on Airbnb, the service seemed like a godsend. Why millennials are careful shoppers. The world often views millennials as indecisive, but the opposite is actually true. The 80 million people between the ages of 18 and 37 aren't avoiding decisions; they are simply taking their time in weighing their options, said Jeff Fromm, millennial expert and founder of The FutureCast, a millennial consultancy.

"In a sense, they want to get everything right and will crowd source decisions before purchasing anything they buy from cars to shoes," said Jeff Fromm, founder of FutureCast, a millennial marketing research and consultancy firm. That makes sense, considering millennials have the highest penetration of Internet usage at 93 percent, and 84 percent of them are accustomed to accessing information via social media.

Their constant connectivity and dependence on social media means that they trust their friends and social networks. The Institute for New Economic Thinking. The old political-economic thinking of Karl Polanyi was never properly absorbed into "mainstream" North Atlantic economics: recognizing that land, labor, and finance are not really "commodities" returns institutions and social processes to the center of economic analysis. Fred Block of U.C. Davis writes: What can economists learn from Karl Polanyi, the Hungarian refugee author of The Great Transformation?

Part of the answer is suggested by a recent column (New York Times, April 3), in which Paul Krugman argues that a substantial raise for U.S. workers is both practical and feasible. Making this case forces him to challenge standard economic logic. Future of Work: Collaboration & Communication. Sharing Economy Trends: Sound Will Emerge As The New Word - In 2015 sound will emerge as the new imagery. Just as images replaced words as the top method of expression in the age of Instagram, next up on the agenda is the era of sound.

Your Online Content Should Deliver 'Cognitive Ecstasy' The Happiest People Know Their 'Flow State.' What's Yours? Think about what makes you happier than anything else in the world. Inbound Marketing with Owned, Earned and Paid Media [Infographic] Apply your inbound marketing with owned, earned and paid media model presented in this infographic by Smartinsights and see how it works. Owned Media: This is what you’ve got, from your website, blog and social networks that you control such as Facebook Page, Twitter account, Pinterest, Google+ and more. Bullish on digital: McKinsey Global Survey results. As businesses continue to embrace digital tools and technologies—especially when engaging with customers—C-level executives in a recent McKinsey survey say they are stepping up their own involvement in shaping and driving digital strategies.

This is vital to the success of digital programs, as survey respondents most often cite a lack of senior-management interest as the reason for an initiative’s failure. Academic About pop culture/trends and social issues/civics. Marketing 101 @ Google U — Life Learning. “I want you to run a direct marketing campaign reaching five million small businesses across emerging markets — you pick the countries. Debranding: why Coca-Cola's decision to drop its name worked. The success of Coca-Cola's Share a Coke campaign in which the brand name was replaced by 150 of Britain's most popular names has led to a lot of scratching of heads as to what it was about this campaign that meant it worked so well.

Social's Value Measured in Engagement Over Sales. A History of the Internet and the Digital Future: Johnny Ryan: 9781861897770: Amazon.com. 3 Ways to Harness the Inner Child in Every Entrepreneur. I’ve had the good fortune of starting several companies, both in the United States and England, building them from product concept to market expansion to successful exit. The car of the future - Feb. 12, 2015. In the future, people will pay to feel unemployed: On Melanie Gilligan's latest film. How to Optimize Your Content for B2B Buyers. The businesses driving on-demand app services. You Don’t Need A Digital Strategy, You Need A Digitally Transformed Company. Your Social Life Commercialised: Who Profits?  Pop Up Republic Revolutionizes The Shopping Experience With New App.

Growing Research Links Friendship and Success. Big Bang Disruption: When Better is Also Cheaper. Mark Zuckerberg: an unequal internet is better than no internet at all. Drone laws in the UK – what are the rules? What Role Does Technology Play in Record Levels of Income Inequality? What is Internet.org and will it really come to Europe? 3 Digital Marketing Channels That Work for Every Advertiser. Tudor Reilly Health. Creative Self-Disruption by Mohamed A. El-Erian. The Retail Prophet Has Spoken: Collaborate, Connect, Innovate. 6 Practices That Will Shape Retail Digital Transformation  Welcome to Forbes. The Satori Generation. Madrid, la protesta degli ologrammi contro la Legge Bavaglio. Forget The Internet Of Things, There Is A Digital Revolution Taking Place In Our Shopping Malls.

The End of Asymmetric Information. Augmented And Virtual Reality To Hit $150 Billion, Disrupting Mobile By 2020. Monster is the most 'socially active' soft drink brand. Massimo Banzi: How Arduino is open-sourcing imagination. Yep, that tablet at bedtime really is messing with your sleep. ReadWrite. Top 500 Global Sites. Networking For Funding Success. Augmented Pixels – leading developer of Augmented Reality solutions for retail, real estate, marketing and media! The Economics of You: A Call to Be Extraordinary. The Internet Never Ends: You Can Deny That Or Embrace It. The Return of the Gadget Lab Podcast. The Future for Labour Is Self-Employment. 3 ways inequality is making life worse for everyone. The Internet doesn’t make you smarter; you only think it does.

What Happens to Society When Robots Replace Workers? A Critique of (a-political) Technology Critique. Tools of Change. The future of loneliness. Biomimicry: Mining Nature for Ideas. Don't Be a Prisoner of Your Own Data. Self-Owning Computers Can Beat ‘Skynet’ – Mike Hearn on the Internet of Things. Five Ways Augmented Reality Creates Engaging Customer Experiences. 1.3 billion mobile AR apps in use by 2019. How the Internet of Things Changes Business Models. Four reasons why we’re in another tech bubble (and why that doesn’t matter) - Blog - The Frameworks. Facebook, primo test positivo su velivolo per web in aree remote. The Shut-In Economy — Matter.

The Myth That Americans Are Busier Than Ever - Derek Thompson. Associated Press Stylebook. INTERNET OF FOOD: il GREENPALLET "INTELLIGENTE" a Seeds&Chips > Palm.it. Speech at Net Futures 2015. Survey Paid. How it Works - Jumio. Getting Social: Living in the Age of Tech and Social Media. Joanne Harris condemns Clean Reader app for replacing swear words in novels. The candidate from Facebook: Silicon Valley’s march on Washington.

Reuters: FAA to ease approval process for commercial drones. The real reason why the Spotify model is broken. How To Make Streaming Royalties Fair(er) — Cuepoint. Tesla basically just ignited the driverless car era. Facebook 'tracks web activity of all visitors, even if they're not a member' The evolution of advertising. Periscope. Augmented Reality as Marketing Tech, Pt. 2: The Future of Shopping. The director of Creative Control explains his augmented reality nightmare. The future of tech according to Ashton Kutcher. 5 New Types of Content for the Future of Marketing.