To set the stage for a debate on rigorous standards, researchers from NAEP recently at 47 states that participated in three nationally-administered exams: (2018) #K12 #studentsuccess. School readiness study greg duncan et al. Cumulative and residual effects of teachers. 00220671.2014. Early math matters: Top researcher discusses his work. A study showing that early math skills are one of the best predictors of later success in both math and literacy has become a cornerstone of the growing movement among early childhood educators to boost math instruction in preschool through 3rd grade. 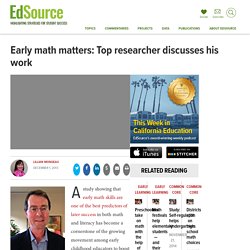 The architect of the 2007 study, Greg Duncan, an economist and University of California Irvine education professor, is a national expert on the importance of strong early math skills. He shared key aspects of his research in interviews with EdSource earlier this year and following a forum on early math by the Silicon Valley Education Foundation in San Jose, where he was the keynote speaker. Excerpts from the interviews are below. Dev 4361428. Part 2: Responding to The Power of Mathematics Learning Trajectories in Early Learning and Primary Classrooms - The Learning Exchange.

Stanford's Deborah Stipek says we should teach more math in preschool. Palo Alto, California Most parents do not have to be convinced that early literacy is important. 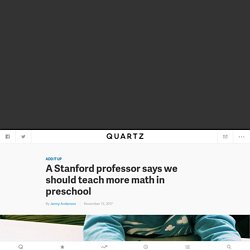 Reading, singing, and talking to children before they can read themselves helps pave the way for curiosity, empathy and, hopefully, a lifelong love of reading. But what about math? Deborah Stipek, a professor at Stanford and the former dean of the school of education, says math is just as important—if not more—to laying the foundations for educational success. Compare K-8 Math Materials - EdReports.org. The research-based balance in early childhood mathematics: A response to Common Core criticisms. Growth Mindset: How to Normalize Mistake Making and Struggle in Class. Carol Dweck’s research on growth mindset has become essential knowledge in education circles. 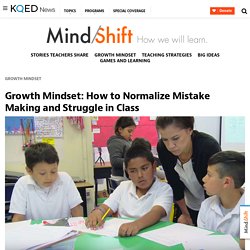 The Stanford psychologist found that children who understand that their brains are malleable and can change when working through challenging problems can do better in school. Now, many school districts are attempting to teach growth mindset to their students. At the core of this practice is the idea of “productive failure” (a concept Dr.

Manu Kapur has been studying for over a decade)* and giving students the time and space to work through difficult problems. Another key idea is to praise the process and effort a child puts in, not the final product. Anchor Charts 101: Why and How to Use Them, Plus 100s of Ideas - WeAreTeachers. Spend any time browsing teacher pages on Pinterest and Instagram, and you’ll run across hundreds of ideas for classroom anchor charts. 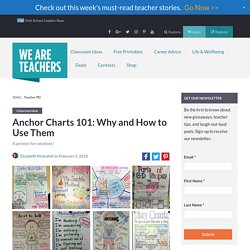 But you may have lingering questions about what they are, what purpose they serve, how to get started, and when to use them. Education Research Highlights From 2016. In 2016, we learned more about how teachers feel about their profession, from the reasons why they started teaching in the first place (#1) to why they leave (#6). We learned that science students do better when teachers share stories about the struggles scientists face instead of portraying them as geniuses (#3).

We’re also learning more about why U.S. students are falling behind students in other countries (#12). Here are 15 studies published this year that every educator should know about. 1. It Turns Out Teaching Really Is a Noble Profession Altruism drives many people to become teachers, according to this survey of over 3,000 public school teachers. …a child first has to learn the foundational skills of math, like______? – Thinking Mathematically. 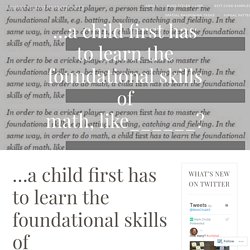 Missing Factors: On Learning What You Don’t Know – Teaching With Problems. I. 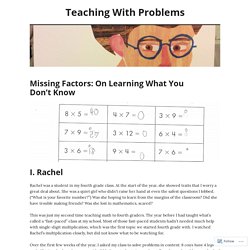 Rachel Rachel was a student in my fourth grade class. At the start of the year, she showed traits that I worry a great deal about. Ten Issues Capturing the Minds of Educators and Parents This Year. Every year there are some topics and conversations that grab readers’ attention more than others. 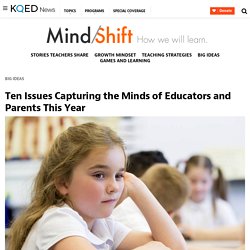 In 2016, MindShift readers engaged most often and deeply with stories about the tricky job of motivating learners, especially when circumstances like poverty, learning differences and trauma complicate classroom dynamics. Educators are looking for ways to reach all facets of the complicated learners that sit in their classrooms, diving deeply into research about self-control, mindfulness programs and teaching strategies to give students structures for their thinking. And, since educating a child is a partnership between schools, families and communities, many classroom teachers and parents alike are increasingly concerned about the role parents play in nurturing and supporting students.

Motivating students is a perennially difficult aspect of teaching, so it’s no wonder that there is robust interest in the neuroscience behind motivation. More Lessons Learned from Research, Volume 1. Effective Instruction. Two features of instruction are especially likely to help students develop conceptual understanding of the mathematics topic they are studying: Attending explicitly to connections among facts, procedures, and ideas Encouraging students to wrestle with the important ideas in an intentional and conscious way In essence, if instruction aims to help students develop conceptual understanding, then it must make explicit the crucial relationships that lie at the heart of such understanding. 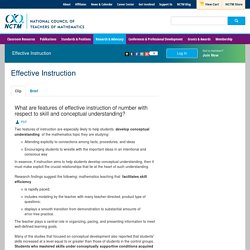 Research findings suggest the following: mathematics teaching that facilitates skill efficiency is rapidly paced; includes modeling by the teacher with many teacher-directed, product type of questions; displays a smooth transition from demonstration to substantial amounts of error-free practice. The teacher plays a central role in organizing, pacing, and presenting information to meet well-defined learning goals. Teacher spends two days as a student and is shocked at what she learns. Caution Flags For Tech In Classrooms : NPR Ed. A group of recent studies on technology in education, across a wide range of real-world settings, have come up far short of a ringing endorsement. 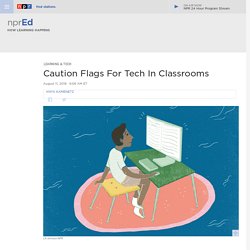 The studies include research on K-12 schools and higher ed, both blended learning and online, and show results ranging from mixed to negative. A deeper look into these reports gives a sense that, even as computers become ubiquitous in classrooms, there's a lot we still don't know — or at least that we're not doing to make them effective tools for learning. First, a quick overview of the studies and their results: Last fall, the Organization for Economic Co-operation and Development published its first-ever, and one of the largest-ever, international analyses of student access to computers and how that relates to student learning.

(The OECD administers the PISA test, the world-famous international academic ranking.) That's right. A little bit of computer use was modestly positive, the authors found. Now let's move to the U.S. Education Week. We Ask, We Listen, We Learn. I’ve been a math educator for more than fifty years, and I thought that by now I’d probably heard every possible answer to problems I’d given students. 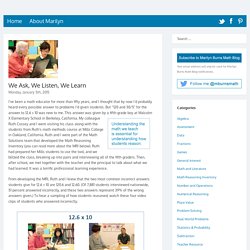 But “120 and 30/5” for the answer to 12.6 × 10 was new to me. This answer was given by a fifth-grade boy at Malcolm X Elementary School in Berkeley, California. My colleague Ruth Cossey and I were visiting his class along with the students from Ruth’s math methods course at Mills College in Oakland, California.

Ruth and I were part of the Math Solutions team that developed the Math Reasoning Inventory (you can read more about the MRI below). Ruth had prepared her Mills students to use the tool, and we blitzed the class, breaking up into pairs and interviewing all of the fifth graders. Teaching to the Beat of a Different Drummer. Have you ever said or thought any of the following? “They just add all the numbers! It doesn’t matter what the problem says.” “They don’t stop to think!

They just start computing as soon as they’re done reading the problem.” “They don’t even realize this is exactly the same type of situation as the problem we did yesterday!” Math Teachers Should Encourage Their Students to Count Using Their Fingers in Class. A few weeks ago I (Jo Boaler) was working in my Stanford office when the silence of the room was interrupted by a phone call.

A mother called me to report that her 5-year-old daughter had come home from school crying because her teacher had not allowed her to count on her fingers. This is not an isolated event—schools across the country regularly ban finger use in classrooms or communicate to students that they are babyish. This is despite a compelling and rather surprising branch of neuroscience that shows the importance of an area of our brain that “sees” fingers, well beyond the time and age that people use their fingers to count.

In a study published last year, the researchers Ilaria Berteletti and James R.