Untitled. Posted by John Spacey, February 13, 2016 updated on March 22, 2017 Brand awareness is the ability of customers to identify your brand by its attributes. 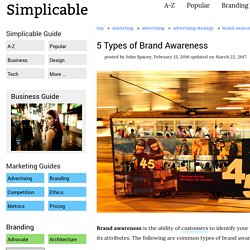 The following are common types of brand awareness. Brand Recall Unaided recall of a brand name given a product category. Customers can often name 1-7 brand names for a broad product category such as "airlines. " Brand Recognition. Introduction So much is changing, so fast, in technology, media, and telecom (TMT) that it can be hard to grasp. 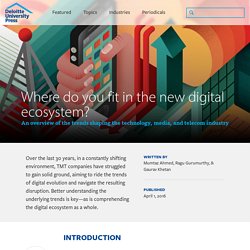 From almost any vantage point, it’s increasingly difficult to understand your place in a network that is rapidly growing both larger and more complex, and to clearly identify the sources of value creation today, much less tomorrow. And it’s not hard to find examples of TMT companies—and even entire sectors—damaged by a failure to understand and adapt to a changing industry landscape. Smartphone companies disrupted prominent mobile handset makers, which are still struggling to catch up. Many established enterprise software providers, late in adapting to cloud-based models, lost significant market share to software-as-a-service firms. To craft a realistic digital strategy, you need a roadmap for how to get there. 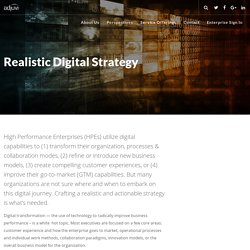 One that focuses on the six enabling levers that unlock the benefits of digital transformation. Six Enabling Levers Strategy: What are your objectives? One of the signature challenges of large organizations today is the unique set of issues they face when trying to improve the way their workers interact, communicate, and collaborate together. 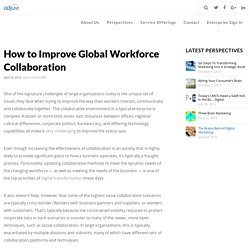 The collaborative environment in a typical enterprise is complex: A dozen or more time zones, vast distances between offices, regional cultural differences, corporate politics, bureaucracy, and differing technology capabilities all make it very challenging to improve the status quo. Even though increasing the effectiveness of collaboration is an activity that is highly likely to provide significant gains to how a business operates, it’s typically a fraught process. Fortunately, updating collaborative methods to meet the dynamic needs of the changing workforce — as well as meeting the needs of the business — is one of the top priorities of digital transformation these days.

Models, Architectures, Perspectives (MAPs) What You See Is Not What You Get Models are representations and as such they are necessarily set in perspective and marked out by concerns. 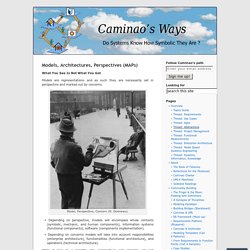 NetworkedBlogs. If we trace a path that starts with Gutenberg’s use of moveable type to Malcom McLean’s invention of the shipping container, we start to recognize a very interesting pattern: Each new layer of abstraction and standardization creates tremendous value out of the resulting increases in scale and efficiency. 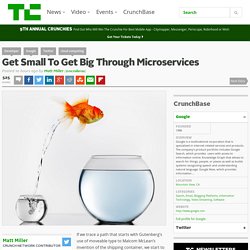 Today’s digital innovators can trace a similar historical path that starts with mainframe computers and monolithic applications and then, step-by-step, reveals software’s interchangeable parts until we arrive at today’s cloud-based era of microservices and continuous integration. Microservices is an approach to building software that shifts away from large monolithic applications toward small, loosely coupled and composable autonomous pieces.

Graphic recording of a recent Shareable-hosted discussion on sharing cities. 2016 may be the year the sharing cities movement goes big. 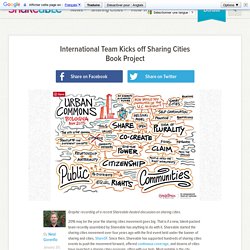 That is if a new, talent-packed team recently assembled by Shareable has anything to do with it. Shareable started the sharing cities movement over four years ago with the first event held under the banner of sharing and cities, ShareSF. Since then, Shareable has supported hundreds of sharing cities events to push the movement forward, offered continuous coverage, and dozens of cities have launched a sharing cities program, often with our help.

Most notable is the city government of Seoul, South Korea which has invested heavily in creating a sharing city. Shareable’s new book project and team (see below) aims to help the sharing cities movement get to the next level. Above Image: Honeycomb 2.0, click and access multiple sizes stored on Flickr, Please share widely, with attribution, non-commercially. 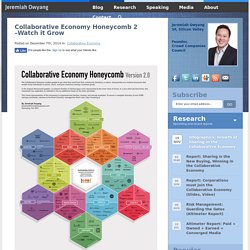 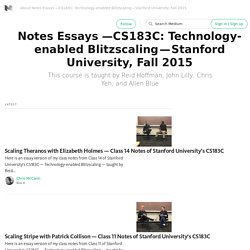 Intermediaries and Cybermediaries: Sarkar, Butler and Steinfield. Back to Vol. 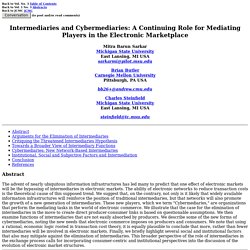 No. 3 Table of Contents Back to Vol. 1 No. 3 Abstracts Back to JCMC JCMC Intermediaries and Cybermediaries: A Continuing Role for Mediating Players in the Electronic Marketplace. The true power of the crowd lies in its ability to find its place in the market and to make investment decisions itself. Nowhere is this more true than in the real estate crowdfunding space. Despite the present limitations required in the JOBS Act that only accredited investors can play the equity crowdfunding game, the power of the crowd is already being unlocked and is now awaiting for a full blast once non-accredited investors enter the game.

One can sense the potential impact of the crowd in these words from Bruce Lipnick, Founder and CEO of Crowd Alliance, an equity crowdfunding platform going into real estate crowdfunding: In 2013, there were 8.6 million accredited investors, including angels that invested a total of $24.8 billion. Image credit: Xavier Damman @xdamman This week I am participating in Crowdsourcing Week Europe 2015 in Brussels. The conference has an amazing range of speakers from both the public and private sector sharing their ideas about, and experiences from, the Crowd Economy. My session focused on the critical role of Communities in the Crowd / Collaborative Economy, and covered: Why 20th century businesses aren’t adapting to 21st century realities;Why we need a fundamentally new and more expansive approach to building online communities in our evolving global economy;Emerging opportunities for businesses to create and exchange new forms of value with their communities and in the process, become more sustainable.

Key points detailed below: At a recent conference for association executives, I overhead the following conversation between two colleagues: “We’re planning an online community for our members”