Blame game begins at IL&FS as ex-independent directors defend their role. Want better returns? EPFO panel pitches for long-term investment in stocks. An expert group set up by the Employees’ Provident Fund Organisation (EPFO) has pitched for long-term investment in stocks for 5-10 years, saying this would yield better returns for over 60 million subscribers, according to a source. 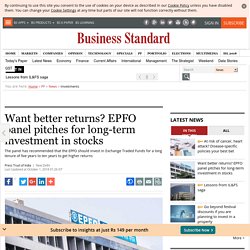 The report of the panel was listed on the agenda of the meeting of its advisory body, Finance and Investment Committee (FIC), held on September 19. However, a source said the discussion on the report was deferred for the next meeting, expected to be scheduled sometime in the first half of next month. Business-standard. Business Standard. Oil at $100 to do more harm than good to global growth; India among losers. Rising oil prices are prompting forecasts of a return to $100 a barrel for the first time since 2014, creating both winners and losers in the world economy. 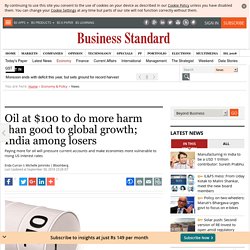 Exporters of the fuel would enjoy bumper returns, giving a fillip to companies and government coffers. By contrast, consuming nations would bear the cost at the pump, potentially fanning inflation and hurting demand. The good news is that Bloomberg Economics found that oil at $100 would mean less for global growth in 2018 than it did after the 2011 spike. Indo-French nuclear deal: 10 yrs after inking, project still a non-starter. Govt plans to bring in stricter disclosure norms for independent directors. Crisis-hit IL&FS to raise Rs 150 bn, hike borrowing limit to Rs 350 bn. IInfrastructure Leasing & Financial Services (IL&FS) has again defaulted on repaying loans — this time the amount in question is about Rs 2.7 billion — even as it received the shareholders’ nod to raise up to Rs 150 billion through debentures. 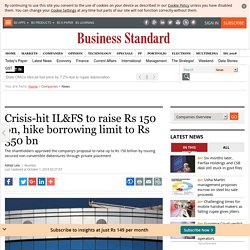 Cash-strapped IL&FS informed the BSE on Sunday that the company was unable to service its obligations on account of loans from banks and financial institutions of Rs 2.23 billion due on September 28 and Rs 470 million due on September 29. Earlier, it could not service repayments due on September 18 and 14. Also, there was a delay in servicing some inter-corporate deposits, which resulted in the downgrading of the company. Now the group flagship and holding company, IL&FS, and key group entities carry either the default ‘D’ grade or a sub-investment grade rating. Another breach hits FB, despite vow to protect data: Will users lose faith? Facebook Inc’s worst security breach ever is a major blow to the company’s effort to rebuild trust with users of the social network after a privacy scandal in March. 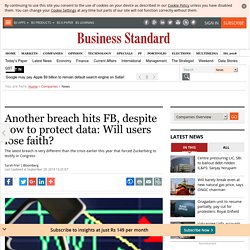 A hacker -- or hackers, as Facebook doesn’t know the number -- exploited several software bugs at once to obtain login access to as many as 50 million accounts. That access let the intruder act like users on their profiles, or on any applications where they signed in using Facebook. Facebook has since solved the vulnerability, but it doesn’t yet have answers to crucial questions. It’s unclear what the hackers did with the access. No let up in fuel prices, petrol nears Rs 91 a litre in Mumbai. LIC, Orix, SBI to subscribe to Rs 45 billion IL&FS rights issue. 58 mn living sans pension, govt spends 0.4% of GDP on key scheme: Survey. Fifty eight million people in India are living without pension or any other form of assistance, civil society organisation Pension Parishad has said. 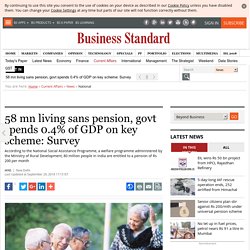 Citing the State of Pensions in India Report 2018, Economist Prabhat Patnaik said the Central government spends as little as 0.04 per cent of the GDP for its flagship Indira Gandhi National Social Assistance (IGNOAPS) programme for ensuring income security for the elderly. "It will cost only about 1.6 per cent of the present-day GDP to ensure 90 per cent of the elderly population a pension of Rs 2,500 per person every month," Patnaik said. According to the National Social Assistance Programme (NSAP), a welfare programme administered by the Ministry of Rural Development, 80 million elderly people in India are entitled to a pension of Rs 200 per month. 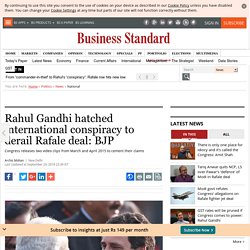 The party said this conspiracy had international dimensions, and that it was meant to help India's enemies, particularly Pakistan, and also to benefit Congress chief's brother-in-law Robert Vadra, and arms dealer Sanjay Bhandari. Brent crude crosses $80 as OPEC rejects Trump's call for oil output boost. In relief for Essar Power MP, NCLT to hear insolvency case on Dec 3. Denying green cards to immigrants on benefits will only cost US more later. YES Bank board to meet today after RBI directive on Rana Kapoor's tenure. Bids invited for debt-ridden Videocon under insolvency resolution process.

Resolution professional of debt-ridden Videocon Industries Tuesday invited bids from prospective buyers to take control of the firm, which has interest ranging from consumer electronics to oil and gas. 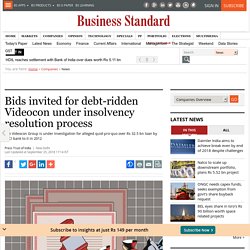 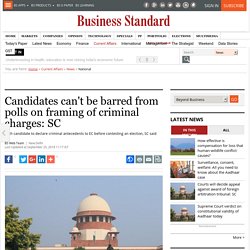 However, the top court held that each candidate shall declare such charges to the election commission before contesting an election. The verdict was pronounced on a batch of pleas raising a question whether lawmakers facing criminal trial can be disqualified from contesting elections at the stage of framing of charges against them. The bench comprising Chief Justice of India Dipak Misra, R F Nariman, A M Khanwilkar, D Y Chandrachud and Indu Malhotra had earlier indicated that voters have a right to know the antecedents of candidates and the Election Commission could be asked to direct political parties to ensure that persons, facing criminal charges, do not contest on their tickets using their poll symbols. MARKET WRAP: Sensex up 347 pts; DHFL cracks 22%, YES Bank slips 2% Nifty Bank index ends 1.44 per cent higher. 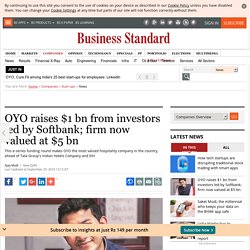 Indian hospitality start-up OYO has raised a massive $1 billion (Rs 72.63 billion) from four existing investors led by SoftBank. The latest fundraising is estimated to value OYO, which operates in the budget hospitality space, at around $5 billion (Rs 363 billion), a five-fold increase since September last year, when the last funding round took place. At Rs 5.91 trn, India's April-Aug fiscal deficit at 94.7% of annual target.

India's budgetary fiscal deficit for April-August at Rs 5.91 trillion accounted for 94.7 per cent of the full year's target of Rs 6.24 trillion, official data showed on Tuesday. The data furnished by the Controller General of Accounts (CGA) showed that the fiscal deficit during the corresponding five months of the previous fiscal was 96.1 per cent. Till August this year, the government's total expenditure stood at Rs 10.70 trillion (43.85 per cent of the budget estimates) while the total receipts were Rs 0.0479 billion (26.38 per cent of the budget estimates). "Rs 2673. 02 billion has been transferred to state governments as devolution of share of taxes by the government up to this period which is Rs 263.90 billion higher than the corresponding period of last year," the Finance Ministry said in a statement.

Out of the total expenditure, Rs 9.38 trillion was on revenue account and Rs 1.32 trillion on capital account. IL&FS will not be allowed to collapse, all options open: LIC chief. Curbing imports of non-essential items to shore up rupee to 68-70: DEA secy. Business Standard. Seven of top-10 cos lose m-cap worth Rs 897.79 bn; RIL takes biggest hit.

Seven of the 10 most valued Indian companies suffered a cumulative erosion of Rs 897.7967 billion in market valuation last week, in tandem with a weak broader market. Over the last week, the Sensex lost a hefty 1,249.04 points, or 3.28 per cent, to end at 36,841.60. Reliance Industries Ltd (RIL) took the steepest hit among the top-10 firms. Barring Tata Consultancy Services (TCS), HDFC Bank and ONGC, rest seven companies, including SBI, Maruti Suzuki India, HDFC and Infosys, witnessed losses in their market capitalisation (m-cap) for the week ended Friday. No concern on liquidity of NBFCs, says SBI chairman Rajnish Kumar. Assuring lending support to non-banking financial companies, SBI Chairman Rajnish Kumar Sunday said there was no concern on liquidity of such firms, amid ongoing debt crisis in IL&FS Group.

Shares of housing finance companies came under sudden heavy selling pressure Friday as investors raised concerns over rising cost of borrowing for the companies amid crisis at IL&FS. Rafale jets deal won't be cancelled; will wait for CAG report: Jaitley. Promising healthcare for everyone, PM Modi launches Ayushman Bharat. Prime Minister Narendra Modi on Sunday launched the 'Ayushman Bharat -Pradhan Mantri Jan Aarogya Yojana (AB-PMJAY)' in Ranchi. The scheme, touted as the "worlds largest government funded healthcare programme", targets more than 500 million beneficiaries. The scheme will provide a cover of up to Rs 500,000 per family per year, for secondary and tertiary care hospitalisation through a network of Empanelled Health Care Providers (EHCP). The Ayushaman Bharat scheme has a great connection with two great Indian legends. "The scheme will cover the treatment of more than 1,300 illnesses including cancer, heart disease, kidney and liver disease, diabetes.

Treating serious diseases will not only be carried out in government but in many private hospitals also. Also, the number of beneficiaries of this scheme is equal to the total population of the entire European Union. "The government is working in a holistic way to improve the country's health sector. Stage set for two-way fight between IHCL, ITC to own Delhi's Taj Mansingh. NDMC, the capital's civic body, looks set to take the auction of Delhi's iconic luxury hotel Taj Mahal (popularly known as Taj Mansingh after the road on which it is located) next Friday after it received the minimum two bids for the asset.

30 new airports to come up in 15 mths, country's 100th coming up in Sikkim. Competition Commission approves ArcelorMittal's acquisition of Essar Steel. SBI hopes to resolve 7-8 stressed power assets by Nov 11: Rajnish Kumar. Govt mulls third notice to Whatsapp on tracing origin of fake messages. With WhatsApp giving no assurance to the government regarding tracing of the origin of fake messages, the Centre is likely to issue another notice to the Facebook-owned company next week. UPA to blame for HAL's exclusion from Rafale deal: Nirmala Sitharaman. US-China trade war may last 20 yrs, to be a mess for all parties: Jack Ma. Alibaba chairman Jack Ma said on Tuesday that trade frictions between the United States and China could last for two decades and would be "a mess" for all parties involved, citing weak trade rules.

Ma was speaking at an Alibaba investor conference hours after Washington said it would impose duties on an extra $200 billion worth of Chinese imports, drawing a warning from Beijing that it would retaliate. Ma said trade tensions would likely impact Chinese and foreign companies immediately and negatively. He predicted that Chinese businesses would move production to other countries in the medium-term to get around the tariffs. Govt okays Rs 91 bn worth of military equipment in 'Make in India' push.