When Is Sex a Spiritual Practice? Recognizing that our bodies and our sexuality are sacred is a good way to begin undoing the split between sex and spirit that’s plagued our dualistic culture for millennia. 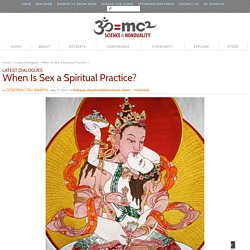 But much more is necessary for erotic activity to take its rightful place as a spiritual practice. The sex negative conditioning so pervasive in both secular and spiritual communities has long served to distort our natural desire for Union. While there are certainly gifts to be found in celibacy, both the shadow side of abstaining and the loss of the gifts of a fully expressed sexuality, take their toll on bodymind. Robert Lanza - What are space and time? Scientific Heresies: Heralds of a Nondualistic Mythology, Charles Eisenstein. « The Closing of the Scientific Mind Commentary Magazine. The huge cultural authority science has acquired over the past century imposes large duties on every scientist. 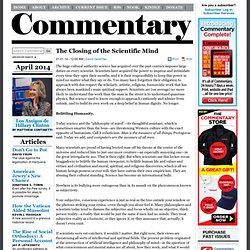 Scientists have acquired the power to impress and intimidate every time they open their mouths, and it is their responsibility to keep this power in mind no matter what they say or do. Too many have forgotten their obligation to approach with due respect the scholarly, artistic, religious, humanistic work that has always been mankind’s main spiritual support. Scientists are (on average) no more likely to understand this work than the man in the street is to understand quantum physics. But science used to know enough to approach cautiously and admire from outside, and to build its own work on a deep belief in human dignity.

No longer. Belittling Humanity. « The Closing of the Scientific Mind Commentary Magazine. What is nonduality? What is Nonduality, Nondualism, or Advaita? 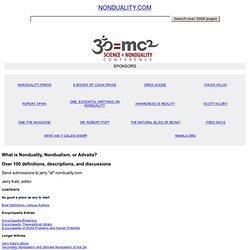 Over 100 definitions, descriptions, and discussions Send submissions to jerry "at" nonduality.com Jerry Katz, editor As good a place as any to start Brief Definitions, Various Authors. What is nonduality, and how does it connect people? Photo credit: Emily Goodman Often, we focus on ourselves as separate individuals. 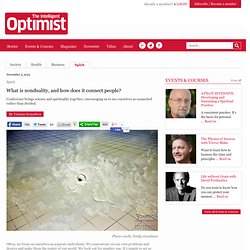 We concentrate on our own problems and desires and make them the center of our world. We look out for number one. It’s simple to act as individuals—our society values taking care of ourselves before others and encourages us to recognize how we are different rather than similar. Why Mysticism Isn't A Dirty Word. Psychedelics and the Study of Perception, James Fadiman. Consciousness and The Interface Theory of Perception, Donald Hoffman. 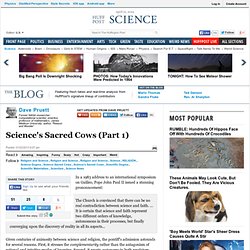 It is certain that science and faith represent two different orders of knowledge, autonomous in their processes, but finally converging upon the discovery of reality in all its aspects... Given centuries of animosity between science and religion, the pontiff's admission astounds for several reasons. First, it stresses the complementarity rather than the antagonism of rational and intuitive modes of knowing. Second, it grants autonomy to both revelatory processes, implying that neither should seek to manipulate or triumph over the other. Citizen's Hearing on Disclosure w Daniel Sheehan - a paradigm changer. The Nature of Perception. Science and Nonduality. SAND brings together preeminent scientists, philosophers, spiritual teachers, and mystics for an exploration of the new paradigm emerging in spirituality that is grounded in cutting-edge science and consistent with the ancient wisdom of nonduality -- the deep understanding of the interconnectedness of life... read more.... 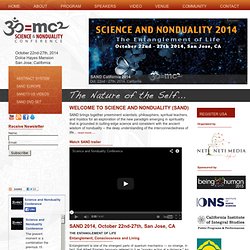 Watch SAND trailer Entanglement, Consciousness and Living Entanglement is one of the strangest parts of quantum mechanics — so strange, in fact, that Albert Einstein famously referred to it as "spooky action at a distance. " An entangled system shows a property that has been measured for the whole but not for parts. (5) Al Rbe. Nonduality: Hameed Ali Explores the Illusive Self. 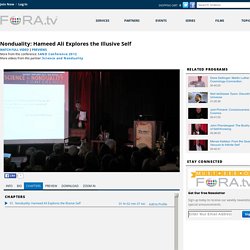 H. Almaas), was born in the Middle East, but at age 18 he moved to the USA to study at the University of California in Berkeley. Hameed was working on his Ph.D. in physics, where he was studying Einsteirn's theory of general relativity and nuclear physics, when he reached a turning point in his life and destiny that led him more and more into inquiring into the psychological and spiritual aspects of human nature. Conference/science_and_nonduality_sand_conference_2012/buy_programs. The Physics of the Self panel with Menas Kafatos, John Hagelin, Lothar Schafer. Is Consciousness the Unified Field? A Field Theorist's Perspective - John Hagelin, SAND11. Science and Nonduality.

Related:  the theory of everything   -  Education   -  Enterprise