How to Ban Windows 10 Ads & NSFW Content from Your Desktop. Advertisement Windows 10 has privacy and security advocates up in arms . 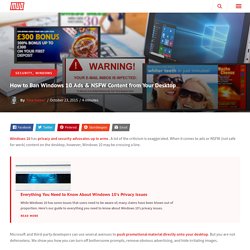 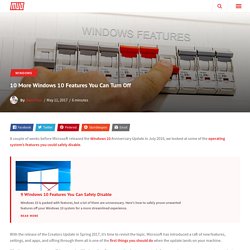 How to Find Your Windows PC’s Serial Number. Windows doesn’t display your PC’s serial number anywhere in its interface, and neither do popular system information tools. 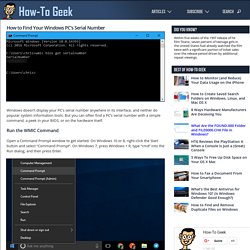 But you can often find a PC’s serial number with a simple command, a peek in your BIOS, or on the hardware itself. Run the WMIC Command Open a Command Prompt window to get started. Another opportunity for creators in the next major Feature Update to Windows 10. Microsoft announced last week that the final testing build for Windows 10 has shipped for 2016 as the Windows team gets ready for some well deserved downtime over the holidays. 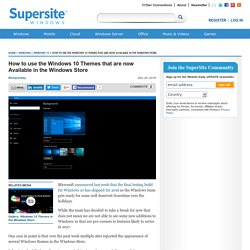 While the team has decided to take a break for now that does not mean we are not able to see some new additions to Windows 10 that are pre-cursors to features likely to arrive in 2017. One case in point is that over the past week multiple sites reported the appearance of several Windows themes in the Windows Store. I dug into the Windows Store to research this piece of news and discovered there are actually 13 themes currently listed in the Personalization category. A closer look at each listing provides a few key pieces of information that leads me to believe there will be a new way to use themes in the Creators Update that is expected in March 2017. Let's take a closer look at those tidbits: In the mean time you can still download them from the Windows Store and I will show you below how to use the themes. Windows 10's Defender Hub app shows up on the Windows Store - MSPoweruser. Microsoft has released a new Windows 10 app on the Windows Store. 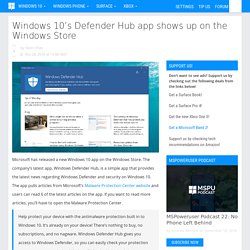 The company’s latest app, Windows Defender Hub, is a simple app that provides the latest news regarding Windows Defender and security on Windows 10. The app pulls articles from Microsoft’s Malware Protection Center website and users can read 6 of the latest articles on the app. If you want to read more articles, you’ll have to open the Malware Protection Center. Equalizer APO download. Equalizer APO / Documentation Wiki / Documentation. OneNote Is Now Truly Free With More Features Than Before. Note-taking apps are a dime a dozen. 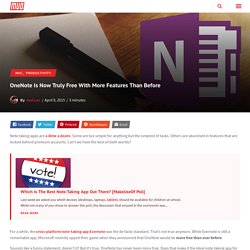 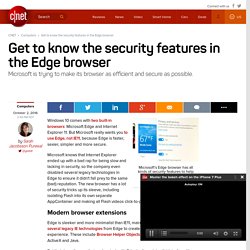 But Microsoft really wants you to use Edge, not IE11, because Edge is faster, sexier, simpler and more secure. Microsoft knows that Internet Explorer ended up with a bad rap for being slow and lacking in security, so the company even disabled several legacy technologies in Edge to ensure it didn't fall prey to the same (bad) reputation. The new browser has a lot of security tricks up its sleeve, including isolating Flash into its own separate AppContainer and making all Flash videos click-to-play.

Bloglovin’ Windows 10 Maintenance: What Has Changed & What You Need to Consider. Windows 10 maintenance has changed. 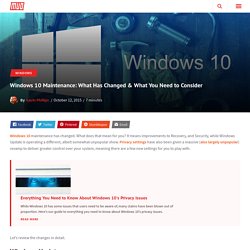 What does that mean for you? It means improvements to Recovery, and Security, while Windows Update is operating a different, albeit somewhat unpopular show. Privacy settings have also been given a massive (also largely unpopular) revamp to deliver greater control over your system, meaning there are a few new settings for you to play with. Top 10 Clever Google Search Tricks. 14 Special Google Searches With Instant Answers.

Google can do more than display lists of websites – Google will give you quick answers to many special searches. 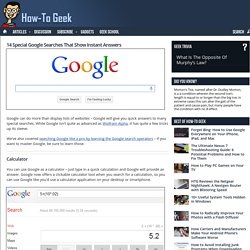 While Google isn’t quite as advanced as Wolfram Alpha, it has quite a few tricks up its sleeve. We’ve also covered searching Google like a pro by learning the Google search operators – if you want to master Google, be sure to learn those. Calculator You can use Google as a calculator – just type in a quick calculation and Google will provide an answer. How To Use Google Search As An Online Timer. Learn about a simple search command that will let you use Google as an online timer to help you remind of any upcoming tasks. 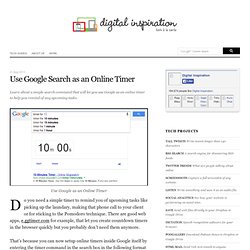 Use Google as an Online Timer Do you need a simple timer to remind you of upcoming tasks like picking up the laundary, making that phone call to your client or for sticking to the Pomodoro technique. There are good web apps, e.ggtimer.com for example, that let you create countdown timers in the browser quickly but you probably don’t need them anymore. That’s because you can now setup online timers inside Google itself by entering the timer command in the search box in the following format (the word “set” is optional): timer for <time> OR set timer for <time> The <time> can use a combination of hours, minutes and seconds. What is iCloud for Windows? With iCloud for Windows, you can access your photos, contacts, calendars, files, and more from any of your devices. iCloud stores your content and automatically keeps it up to date everywhere.

Secret Cortana commands you may not know. "Hey, Cortana, tell me your secrets. " Cortana does a lot — some of it obvious, some of it not so. Microsoft's virtual assistant both manages to make life easier and more delightful across the Windows 10 line-up, appearing on both Windows 10 PCs and Windows 10 Mobile Phones. She's more than just Microsoft's answer to Siri and Google Now — Cortana is both proactive and reactive. There's so much that Cortana can do that it's near impossible to know it all. Here are a few not-so-obvious commands that reveal the true power of Cortana! 1. Cortana's text dictation is great no matter the application, and is highly useful for the times you really shouldn't be typing away. 2. 9 Windows 10 Anniversary Update Features You'll Love. The Windows 10 Anniversary Update is finally here! It’s now been one year since Windows 10 went live, and even though the operating system is still far from perfect, this update brings a lot of much-needed changes and additions.

In other words, if you haven’t been happy with Windows 10 up until this point, the wide array of new features and improvements may be enough to win you back — unless you’re boycotting Microsoft for its aggressive marketing practices. Here are the best and most anticipated features to arrive in the update. We’re quite happy with them and we think you will be, too. 1. Windows help. Meet Cortana: The ultimate guide to Windows 10's helpful digital assistant. So long, search. Windows 10’s file-scouring functions have been assumed by Cortana, Microsoft’s smart, sassy digital assistant, which debuted with roaring success on Windows Phone 8.1.

But Cortana does a lot more than simply poke through your local documents. This virtual assistant lives up to its title: setting reminders, tracking your schedule, surfacing news she thinks will appeal to you, personally, and a whole lot more, powered by Bing and Microsoft’s machine learning in the cloud. Cortana’s no search slouch either, responding to your voice and understanding natural language commands like “Find my pictures from June.” How to make a Windows 10 recovery drive. I forgot my Windows 10 password! How to use Windows 10's game DVR tool to capture video in any app.

In April, Microsoft introduced the Game bar to Windows 10 as a means for recording gameplay sessions on PCs. But that’s not all it’s good for, as it turns out: you can also use the new Game bar recording function as a quick and dirty screen video recorder for other apps. In fact, this could work as a basic alternative to third-party options like Camtasia, as BetaNews first discovered. The new feature only works in more recent updates to the Windows 10 insider preview. Don’t expect to see the Game bar option if you’re on the slow update ring running the now ancient Build 10074 or something similar.

We should also point out that it’s not yet clear if this feature will function the same way in the final version of Windows 10 that begins rolling out on July 29. Now let’s get to the good stuff. You can call up the Game bar by hitting the Windows logo key + G. Once you hit the Game bar shortcut, a pop-up window will appear as seen above that says Do you want to open Game bar? 12 obscure new Windows 10 features that eliminate everyday hassles. Windows 8.1 altered the way Windows handled OneDrive integration, using “pointer files” to make it look like your OneDrive-stored files were on your PC, but they weren’t really downloaded until you tried to open them.

Ça permet de faire le tour de tout ce qu'il est possible de customiser dans son Windows, sans avoir à farfouiller dans des dizaines de menus et sous-menus. Nettoyer Windows 10 après une mise à jour depuis Windows 7 ou Windows 8. How to Change the Color of Window Title Bars in Windows 10. In Windows 10 the title bar of all the desktop apps is just plain white. Unlike in the previous versions of Windows, you cannot change the title bar color that easily with just a few clicks in the personalization panel. Even though the decision to remove the ability to change the title bar color is part of the design choice, it is absolutely a deviation from the previous Windows options. If you think the white-colored title bar is too light for your eyes, or if you just want to change the title bar color to your favorite color, then you can do that by following the below guide.

The procedure detailed below is not necessarily difficult but is certainly messy. Compare Windows 10 Editions. Familiar, and better than ever. UEFI Firmware Settings - Boot to from inside Windows 10 - Windows 10 Forums. Skip the Login Screen! Here’s How to Boot Into Windows Directly. Having to sign in every time you boot up Windows is a pain. Fortunately, you can actually hide the login screen for good and all it takes is a few simple steps. How to Unlock the Secret Administrator Account in Windows. The Windows Administrator Account is a useful tool you can use for finding and repairing issues — but starting with Vista, Microsoft disabled the account due to the User Account Control feature. How To Install & Uninstall Windows Programs In Bulk.

Installing and uninstalling programs can be easy and quick when it’s just a one-off, but what about when you need to perform this action in bulk? It can be a hassle and a time consuming process, so we’re going to teach you how to do it in a flash. There’s nothing inherently wrong with installing programs in turn from the developer’s website or using the native Windows uninstaller to remove them. How to Enable God Mode in Windows 7, 8.1, and 10. Windows is extremely customizable and power users tweak everything, but some of its most common settings are found in the Control Panel.

If you’ve read our guide to the Control Panel, you know how many useful configuration options it holds, but the menus can prove difficult to navigate. Enter God Mode, a system shortcut that gives you access to all Control Panel items in one handy place (not like a video game cheat code!). The Ultimate Windows 10 Activation & License FAQ. The confusion surrounding Windows 10, updates, licensing, activation, and versions is substantial. Three easy ways to speed up Windows 10.

How to Get the Aero Glass Theme on Windows 10. What Security Software Should You Be Using in Windows 10? How to Get Windows Media Center in Windows 10 & Its Limitations. How You Can Get Help in Windows 10. How to Power Up the Windows 10 Command Prompt with CTRL+C and CTRL+V. 10 Best Shortcuts To Add To Your Right-Click Menu. Troubleshooting and repairing Windows 10 problems. 10 Reasons You Should Be Using Microsoft Edge Now.

Windows 10: How to fix Nvidia driver issues after upgrade.