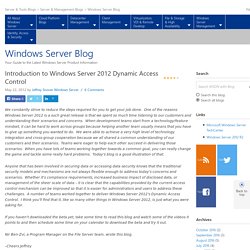 One of the reasons Windows Server 2012 is a such great release is that we spent so much time listening to our customers and understanding their scenarios and concerns. When development teams start from a technology/feature mindset, it can be hard to work across groups because helping another team usually means that you have to give up something you wanted to do. We were able to achieve a very high level of technology integration and cross-group cooperation because we all shared a common understanding of our customers and their scenarios. Teams were eager to help each other succeed in delivering those scenarios. When you have lots of teams working together towards a common goal, you can really change the game and tackle some really hard problems. Nir Ben-Zvi, a Program Manager on the File Server team, wrote this blog. –Cheers Jeffrey Hello, my name is Nir Ben-Zvi and I work in the Windows Server team. Container-Based Controls versus Dynamic Authorization: The Difference in Windows Environments (Part 1 of 2) 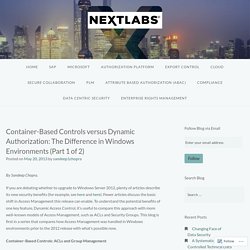 If you are debating whether to upgrade to Windows Server 2012, plenty of articles describe its new security benefits (for example, see here and here). Fewer articles discuss the basic shift in Access Management this release can enable. To understand the potential benefits of one key feature, Dynamic Access Control, it’s useful to compare this approach with more well-known models of Access Management, such as ACLs and Security Groups. This blog is first in a series that compares how Access Management was handled in Windows environments prior to the 2012 release with what’s possible now. Container-Based Controls: ACLs and Group Management ACLs and Security Groups are currently the most ubiquitous model of Access Management.

The ACL and Security Group model is both manual (with permissions defined per container, by an Administrator), and static (pre-determined and applied ahead of time). From the Perspective of IT Administrators For End Users Like this: Like Loading... Les attaques de circuits intégrés. Sécurité informatique et protection de la vie privée. Network Security & Information Security resource for IT administrators. How to Prevent Users from Changing Permissions on File Servers. On file servers in corporate environments one typically does not want users to change permissions, even on their own files. 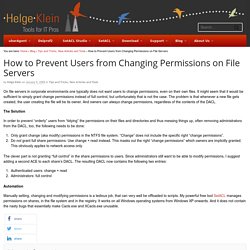 It might seem that it would be sufficient to simply grant change permissions instead of full control, but unfortunately that is not the case. The problem is that whenever a new file gets created, the user creating the file will be its owner. And owners can always change permissions, regardless of the contents of the DACL. The Solution In order to prevent “orderly” users from “tidying” the permissions on their files and directories and thus messing things up, often removing administrators from the DACL, too, the following needs to be done: Only grant change (aka modify) permissions in the NTFS file system. The clever part is not granting “full control” in the share permissions to users.

How to successfully implement the principle of least privilege. ForensicsWiki. Facebook Privacy Basics. Mobile content from Windows IT Pro. Like most technologies that an IT pro deals with, wireless technology changes from day to day. 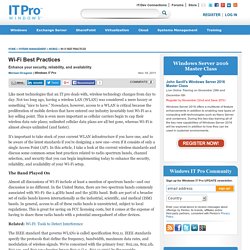 Not too long ago, having a wireless LAN (WLAN) was considered a mere luxury or something "nice to have. " Nowadays, however, access to a WLAN is critical because the proliferation of mobile devices that have entered our industry invariably tout Wi-Fi as a key selling point. This is even more important as cellular carriers begin to cap their wireless data rate plans; unlimited cellular data plans are all but gone, whereas Wi-Fi is almost always unlimited (and faster). It's important to take stock of your current WLAN infrastructure if you have one, and to be aware of the latest standards if you're designing a new one—even if it consists of only a single Access Point (AP). The Band Played On Almost all discussions of Wi-Fi include at least a mention of spectrum bands—and our discussion is no different.

Related: Wi-Fi: Tools to Detect Interference Channel Surfing Security, Not Obscurity 1. 2. 3. 4. How To Secure Your Wi-Fi Network Against Intrusion. Insecure Wi-Fi is the easiest way for people to access your home network, leech your internet, and cause you serious headaches with more malicious behavior. 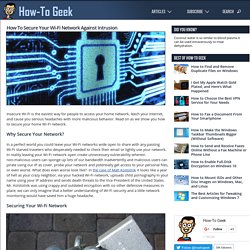 Read on as we show you how to secure your home Wi-Fi network. Why Secure Your Network? In a perfect world you could leave your Wi-Fi networks wide open to share with any passing Wi-Fi starved travelers who desperately needed to check their email or lightly use your network. In reality leaving your Wi-Fi network open create unnecessary vulnerability wherein non-malicious users can sponge up lots of our bandwidth inadvertently and malicious users can pirate using our IP as cover, probe your network and potentially get access to your personal files, or even worse. What does even worse look like?