The Burglary That Exposed COINTELPRO: Activists Mark 50th Anniversary of Daring FBI Break-in. This is a rush transcript. 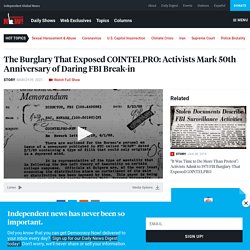 Copy may not be in its final form. AMY GOODMAN: Fifty years ago this week, a group of activists staged one of the most stunning acts of defiance of the Vietnam War era. On March 8th, 1971, eight activists, including a cab driver, a daycare director, two professors, broke into an FBI office in Media, Pennsylvania, and stole every document they found.

They wanted to document how FBI Director J. Edgar Hoover was spying on citizens and actively suppressing dissent. Soon after stealing the documents, the activists, calling themselves the Citizens’ Commission to Investigate the FBI, began leaking shocking details about FBI abuses to the media. The Once-Classified Tale of Juanita Moody: The Woman Who Helped Avert a Nuclear War. On the morning of Sunday, October 14, 1962, Juanita Moody exited the headquarters of the National Security Agency, at Fort Meade, Maryland, and walked the short distance to her car, parked in one of the front-row spaces reserved for top leadership. 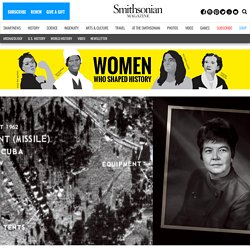 The sky was a crystalline blue, “a most beautiful day,” she recalled later. Moody had just learned that the U.S. Air Force was sending a U-2 spy plane over Cuba to take high-altitude photographs of military installations across the island. The once-classified tale of Juanita Moody and the Cuban Missile Crisis. Juanita Moody dropped out of college in 1943 to serve in the US Signal Intelligence Service, decoding encrypted messages during World War II. 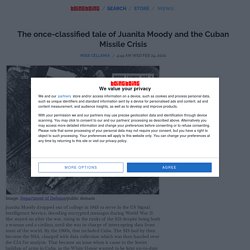 She stayed on after the war, rising in the ranks of the SIS despite being both a woman and a civilian, until she was in charge of intercepting data from most of the world. By the 1960s, that included Cuba. The SIS had by then become the NSA, charged with data collection which was then handed over the CIA for analysis. That became an issue when it came to the Soviet buildup of arms in Cuba, as the White House wanted to be kept up-to-date with any new information, and Moody's boss Louis Tordella was wary of skipping over the CIA. Impressed by her expertise, alarmed by what she had to say, and perhaps concerned that no one was providing the White House with this level of detail about an aggressive military buildup in Cuba, [assistant secretary of defense Edward] Lansdale asked Moody to write up her findings. Air Force Secretly Acquires Russian Missile System: Pantsir S-1. Russian Defence MinistryGetty Images The U.S. 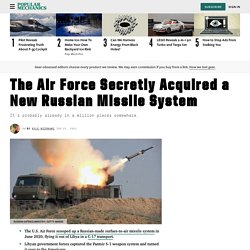 Air Force scooped up a Russian-made surface-to-air missile system in June 2020, flying it out of Libya in a C-17 transport. Libyan government forces captured the Pantsir S-1 weapon system and turned it over to the Americans.Pantsir is a truck-mounted, low-altitude air defense system used in Syria, Libya, and other war zones. Last summer, a secretive U.S. military flight to Libya spirited away one of Russia’s most modern air defense weapon systems. The Search for Walt Ray's A-12 Article #125. By Jeremy Krans I would like to say this all started in late 97 or early 98 when I read a story by Tom Mahood on his now defunct Bluefire web page. 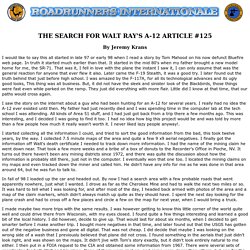 In truth it started much earlier than that. The story of a secret CIA spyplane, a long-hidden crash, and the man who had to find it. Gina Haspel Hangs on at CIA, With Little Support. Central Intelligence Agency Director Gina Haspel is a rarity in the Trump administration’s national security apparatus: a career professional who has beaten the odds and survived repeated personnel purges. 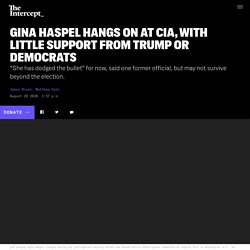 The president is on his fourth director of national intelligence and sixth national security adviser, including all the “acting” officials to hold those positions. But while he traffics in conspiracy theories about the so-called deep state and often says the U.S. intelligence community is out to get him, Trump has never fired a CIA director. Still, Haspel’s hold on her job now appears tenuous. Until recently, in fact, several current and former government officials suggested that Trump was likely to fire her sometime before the election, adding that Haspel privately shared those fears.

Earlier this summer, Haspel confided to a former colleague that she wouldn’t be surprised if Trump replaced her by September, according to the person who spoke with her. Photo: Saul Loeb/AFP/Getty Images. New 'Wind of Change' podcast looks at CIA ties to an '80s pop hit. Hagelin and Friedman: The Gentlemen’s Understanding Behind “The Intelligence Coup of the Century” Document 01 Director of Logistics Memorandum "Issue of Converter M-209 to Foreign Nations. 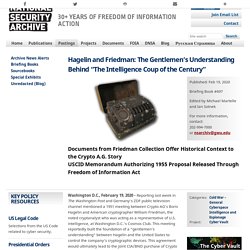 " February 17, 1949. Secret. Source: NSA/CSS Archives. Did the CIA’s Dr. Frank Olson Jump to His Death or Was He Pushed? Making of a martyr: how Qassem Suleimani was hunted down. For Qassem Suleimani, the 62-year-old head of Iran’s Quds Force, and one of the most powerful men in the Middle East, the short flight from Damascus to Baghdad late on Thursday was routine. 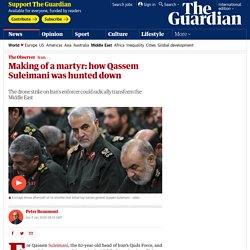 Travelling by private charter, the architect of Tehran’s strategic efforts from Lebanon through Syria and Iraq to Yemen would have avoided all formalities at one of the world’s most securely guarded airports. As his plane touched down just after midnight on Friday morning after reportedly disappearing from commercial flight trackers shortly before landing, two cars were waiting to greet the burly general at the aircraft steps. The Hick From Indiana Who Nailed Master Spy Kim Philby. On the surface, it seemed strange that Bill Harvey had been chosen to take over the Berlin Operations Base, one of the CIA’s most important and prestigious installations. 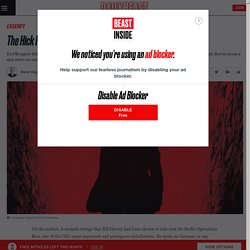 He spoke no German, or any other foreign language, and he had no service overseas—he had never even been overseas. Unlike so many of his CIA colleagues, Harvey had not served with the OSS during the war, and had no dashing stories of time behind enemy lines. Harvey did not look the type either. The former FBI G-man from Indiana was nothing like his more refined colleagues, with their boarding school pedigrees, Ivy League connections, and easy grace. Some were amused and more than a few appalled by Harvey, a blue-collar gumshoe who did not even own a trench coat. Just under six feet, with a bullet-shaped head and bulbous, pear-shaped body that was big and getting bigger, Harvey looked like a flatfoot from a Raymond Chandler novel.

From mind control to murder? How a deadly fall revealed the CIA’s darkest secrets. Glass shattered high above Seventh Avenue in Manhattan before dawn on a cold November morning in 1953. 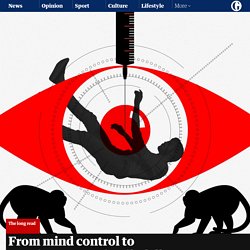 Operation Midnight Climax. Operation Midnight Climax was an operation initially established by Sidney Gottlieb and placed under the direction of Federal Narcotics Bureau in Boston, Massachusetts with the officer George Hunter White under the pseudonym of Morgan Hall for the CIA as a sub-project of Project MKULTRA, the CIA mind-control research program that began in the 1950s.[1] Before the programs were shut down, hundreds of scientists would work History[edit] The project that started in 1954 consisted of a web of CIA-run safehouses in San Francisco, Marin, and New York City. It was established in order to study the effects of LSD on unconsenting individuals. Sex Workers on the CIA payroll were instructed to lure clients back to the safehouses, where they were surreptitiously plied with a wide range of substances, including LSD, and monitored behind one-way glass. The Operation Midnight Climax program was soon expanded, and CIA operatives began dosing people in restaurants, bars and beaches.[2] See also[edit]

How the CIA Used the Illusions of Magicians to Fool the KGB. Understanding the CIA: How Covert (and Overt) Operations Were Proposed and Approved during the Cold War. CIA and NSA know what was actually said between Trump and Putin in Helsinki, but it doesn't matter. The toxic legacy of Canada's CIA brainwashing experiments: 'They strip you of your soul' Government Accidentally Releases Documents on "Psycho-Electric" Weapons. CIA declassifies more of "Zendebad, Shah!" – internal study of 1953 Iran coup.

The CIA’s House of Horrors: Frank Olson’s Fatal Trip. Frank Olson Legacy Project. U.S. soldier in Niger ambush was bound and apparently executed, villagers say. NIAMEY, Niger — The body of Sgt. La David Johnson, one of four U.S. soldiers killed in an ambush by Islamist militants in Niger last month, was found with his arms tied and a gaping wound at the back of his head, according to two villagers, suggesting that he may have been captured and then executed. Adamou Boubacar, a 23-year-old farmer and trader, said some children tending cattle found the remains of the soldier Oct. 6, two days after the attack outside the remote Niger village of Tongo Tongo, which also left five Nigerien soldiers dead. The children notified him. When Boubacar went to the location, a bushy area roughly a mile from the ambush site, he saw Johnson’s body lying face down, he said.

Classic Who: US Government Experiments on Americans — LSD and MK-ULTRA. Continuing our exploration of secret government experiments on American citizens, we now re-publish an article I wrote in 1999 about the CIA and LSD experiments. JFK Lancer - President John F. Kennedy Assassination Latest News and Research. How the CIA Writes History. Government Mind Control Agent Talks. That Time the CIA Secretly Dosed Americans with LSD. US Gov’t, NGOs Behind ‘Panama Papers’ Data Dump. Washington is behind the recently released offshore revelations known as the Panama Papers, WikiLeaks has claimed, saying that the attack was “produced” to target Russia and President Putin.

Monarch Mind Control - The Conspiracy Wiki. The Secrets of MKULTRA. Gnostic MediaNEW MKULTRA DISCOVERY: Terence McKenna admited that he was a "deep background" and "PR" agent (CIA or FBI). The Secret History of the U-2. OPERATION CONDOR: National Security Archive Presents Trove of Declassified Documentation in Historic Trial in Argentina. DOD draft historical study on US operations in Italy in 1950s.