How MLK’s death affected a nation, as told by those who remember it. Martin Luther King Jr. had traveled to Memphis, Tenn., in late March 1968 to lead a protest march in support of the city’s striking sanitation workers. 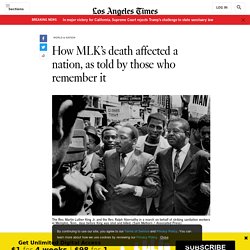 Violence had followed, with police descending on the protesters with billy clubs, mace and tear gas. The next week, King returned to get court permission for another march. Despite the death threats he had received, and the growing concern for his safety, King pressed to hold a nonviolent demonstration. On the night of April 3, he delivered what became known as the “I’ve Been to the Mountaintop” speech, in which he said: “Like anybody, I would like to live a long life. Washinton post. Mourning the Death of Martin Luther King Jr. How Martin Luther King Jr.'s Death Set a War in Motion. Martin Luther King Jr's death: the aftermath revisited by those who were there. The Assassination of Martin Luther King Jr. On the morning of April 3, 1968, Martin Luther King Jr. readied to head to Memphis, Tennessee, for the third time in as many weeks in support of the city's striking sanitation workers. 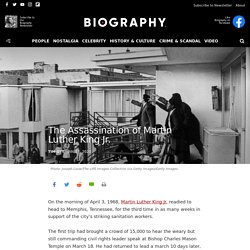 The first trip had brought a crowd of 15,000 to hear the weary but still commanding civil rights leader speak at Bishop Charles Mason Temple on March 18. He had returned to lead a march 10 days later, only to see the demonstration dissolve into rioting and chaos that left a high school student dead. Dismayed by the outcome and discouraged by staffers who wanted him to focus on the upcoming "Poor People's Campaign" in the nation's capital, King nevertheless was determined to lead a second, successful march in Memphis to prove that his method of nonviolent demonstration still had teeth. King was 'exhausted' during his last days. Martin Luther King: Assassination & Aftermath Preview.

Jesse Jackson on Martin Luther King's assassination: 'It redefined America' Jesse Jackson still remembers the sound of the gunshot and the sight of blood. 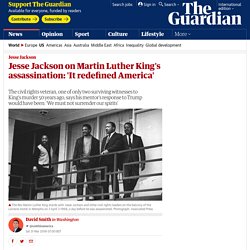 They have been with him for half a century. “Every time I think about it, it’s like pulling a scab off a sore,” he says. “It’s a hurtful, painful thought: that a man of love is killed by hate; that a man of peace should be killed by violence; a man who cared is killed by the careless.” Jackson and fellow civil rights veteran Andrew Young are the last surviving disciples of Martin Luther King who witnessed his assassination on 4 April 1968. Others who were at the Lorraine motel in Memphis, Tennessee, that day have been claimed by the passing decades. 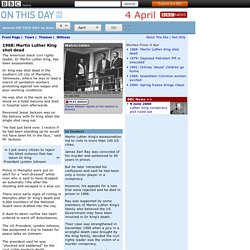 Dr King was shot dead in the southern US city of Memphis, Tennessee, where he was to lead a march of sanitation workers protesting against low wages and poor working conditions He was shot in the neck as he stood on a hotel balcony and died in hospital soon afterwards. Reverend Jesse Jackson was on the balcony with Dr King when the single shot rang out. "He had just bent over. Police in Memphis were put on alert for a "well-dressed" white man who is said to have dropped an automatic rifle after the shooting and escaped in a blue car. There were early signs of rioting in Memphis after Dr King's death and 4,000 members of the National Guard were drafted into the city. A dusk-to-dawn curfew has been ordered to ward off disturbances. The US President, Lyndon Johnson, has postponed a trip to Hawaii for peace talks on Vietnam. Bus boycott. Martin Luther King, Jr. - Mini Bio. 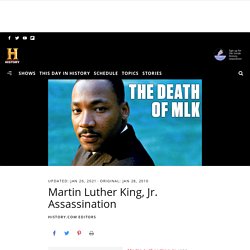 A Baptist minister and founder of the Southern Christian Leadership Conference (SCLC), King had led the civil rights movement since the mid-1950s, using a combination of impassioned speeches and nonviolent protests to fight segregation and achieve significant civil rights advances for African Americans. His assassination led to an outpouring of anger among Black Americans, as well as a period of national mourning that helped speed the way for an equal housing bill that would be the last significant legislative achievement of the civil rights era.