Remembering Hiroshima, and How It Changed the World. After 70 years, the memory may be fading. 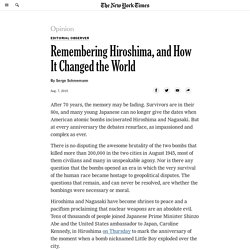 Survivors are in their 80s, and many young Japanese can no longer give the dates when American atomic bombs incinerated Hiroshima and Nagasaki. But at every anniversary the debates resurface, as impassioned and complex as ever. There is no disputing the awesome brutality of the two bombs that killed more than 200,000 in the two cities in August 1945, most of them civilians and many in unspeakable agony.

Nor is there any question that the bombs opened an era in which the very survival of the human race became hostage to geopolitical disputes. The questions that remain, and can never be resolved, are whether the bombings were necessary or moral. Hiroshima and Nagasaki have become shrines to peace and a pacifism proclaiming that nuclear weapons are an absolute evil. The commemorations, with their annual calls for nuclear disarmament, can seem placid and unambiguous.

This is not an easy legacy to shoulder. Hiroshima and Nagasaki Remembered: The Story of Hiroshima. In 1958, the population of Hiroshima reached 410,000, finally exceeding what it was before the war. 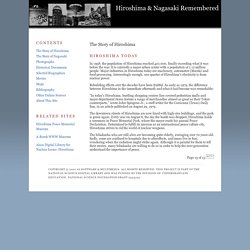 It is currently a major urban center with a population of 1.12 million people. Major industries in Hiroshima today are machinery, automotive (Mazda) and food processing. Interestingly enough, one quarter of Hiroshima's electricity is from nuclear power. Rebuilding efforts over the decades have been fruitful. As early as 1979, the difference between Hiroshima in the immediate aftermath and what it had become was remarkable: "In today’s Hiroshima, bustling shopping centers line covered pedestrian malls and major department stores feature a range of merchandise almost as great as their Tokyo counterparts," wrote John Spragens Jr., a staff writer for the Corsicana (Texas) Daily Sun, in an article published on August 29, 1979 . 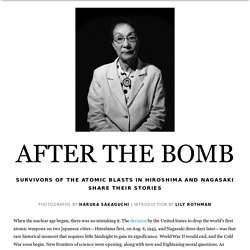 The decision by the United States to drop the world’s first atomic weapons on two Japanese cities—Hiroshima first, on Aug. 6, 1945, and Nagasaki three days later—was that rare historical moment that requires little hindsight to gain its significance. World War II would end, and the Cold War soon begin. But, even as world leaders and ordinary citizens alike immediately began struggling to process the metaphorical aftershocks, one specific set of people had to face something else. Today, photographer Haruka Sakaguchi is seeking out those individuals, asking them to give a testimony about what they lived through and to write a message to future generations. Yasujiro Tanakaage: 75 / location: nagasaki / DISTANCE from hypocenter: 3.4 km. Story of cities #24: how Hiroshima rose from the ashes of nuclear destruction.

The people of Hiroshima have developed a verbal shorthand for describing their city’s layout. 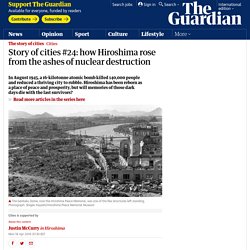 A particular street is “about 1.5 kilometres away”; a building “500 metres north”. No further explanation is required. The unspoken reference point is the hypocentre of the world’s first nuclear attack. At first glance, visitors arriving by bullet train to Hiroshima’s main railway station might have little inkling of the city’s singularly tragic past. On a warm spring evening, groups of European tourists pause outside restaurants offering special deals on oysters – a local delicacy – and board pleasure boats to Miyajima, an island famous for its wild deer and “floating” Shinto shrine. What happened in Hiroshima? - CBBC Newsround. Public domain This photo shows the aftermath of a nuclear bomb dropped on Hiroshima in Japan - one of only two times that nuclear weapons have been detonated in war In 1945 World War Two - the biggest war the world had ever seen - came to an end. 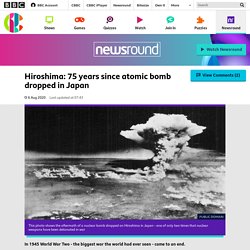 There were celebrations in Europe after Germany surrendered. Bombing of Hiroshima and Nagasaki - Causes, Impact & Lives Lost. On August 6, 1945, during World War II (1939-45), an American B-29 bomber dropped the world’s first deployed atomic bomb over the Japanese city of Hiroshima. 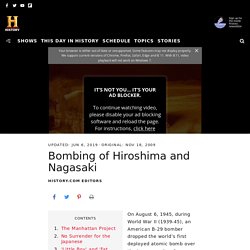 The explosion wiped out 90 percent of the city and immediately killed 80,000 people; tens of thousands more would later die of radiation exposure. Three days later, a second B-29 dropped another A-bomb on Nagasaki, killing an estimated 40,000 people. Japan’s Emperor Hirohito announced his country’s unconditional surrender in World War II in a radio address on August 15, citing the devastating power of “a new and most cruel bomb.” The Manhattan Project Even before the outbreak of war in 1939, a group of American scientists–many of them refugees from fascist regimes in Europe–became concerned with nuclear weapons research being conducted in Nazi Germany. Hiroshima: Dropping The Bomb - Hiroshima - BBC. 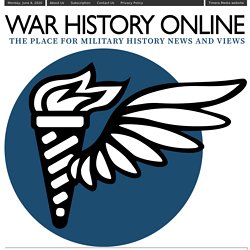 Reports say the total combined death toll of the cities is between 129,000-240,000 while others say it could be higher. What we do know, is that in August of 1945, the United States military dropped a new type of bomb on Hiroshima. The atomic bomb used was called “Little Boy.” Sixteen hours after the bomb was dropped, President Truman asked Japan to surrender. When they didn’t agree, the United States dropped another atomic bomb, this time on Nagasaki.

About half of the deaths occurred the first day when the bombs were detonated. This allowed for optimal destruction. The long-term effects of the bombings are something that has been studied time and time again. This was not so, but the people and their future generations did suffer. Leukemia Increased Over the next few years, the cities would see a spike in leukemia. Lastly, there was an increase in breast cancer. Increase in Anemia Keloids.