List of environmental disasters. Environmental disasters by category[edit] Agricultural[edit] Mismanagement and shrinking of the Aral SeaSalinity in AustraliaSalinization of the Fertile CrescentThe Dust Bowl in Canada and the United States (1934–1939)The Great sparrow campaign; sparrows were eliminated from Chinese farms, which caused locusts to swarm the farms and contributed to a famine which killed 38 million people.Africanized bees, known colloquially as "killer bees""Dirty dairying" in New ZealandSalton Sea California, U.S. 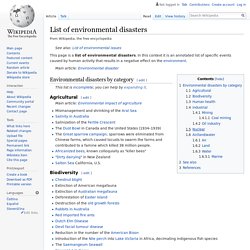 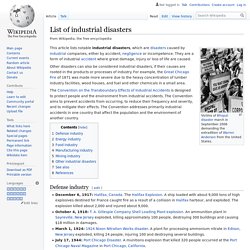 They are a form of industrial accident where great damage, injury or loss of life are caused. Other disasters can also be considered industrial disasters, if their causes are rooted in the products or processes of industry. For example, the Great Chicago Fire of 1871 was made more severe due to the heavy concentration of lumber industry facilities, wood houses, and fuel and other chemicals in a small area. The Convention on the Transboundary Effects of Industrial Accidents is designed to protect people and the environment from industrial accidents. The Convention aims to prevent accidents from occurring, to reduce their frequency and severity, and to mitigate their effects. Defense industry[edit] Energy industry[edit] List of accidents and disasters by death toll. This is a list of accidents and disasters by death toll. 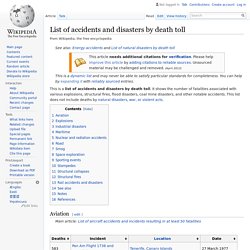 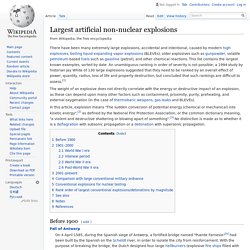 This list contains the largest known examples, sorted by date. An unambiguous ranking in order of severity is not possible; a 1994 study by historian Jay White of 130 large explosions suggested that they need to be ranked by an overall effect of power, quantity, radius, loss of life and property destruction, but concluded that such rankings are difficult to assess.[1] Bhopal disaster. The Bhopal disaster, also referred to as the Bhopal gas tragedy, was a gas leak incident in India, considered the world's worst industrial disaster.[1] It occurred on the night of 2–3 December 1984 at the Union Carbide India Limited (UCIL) pesticide plant in Bhopal, Madhya Pradesh. 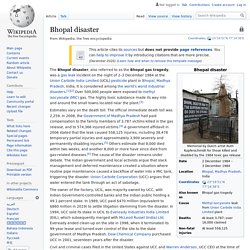 Over 500,000 people were exposed to methyl isocyanate (MIC) gas and other chemicals. The toxic substance made its way into and around the shanty towns located near the plant.[2] Estimates vary on the death toll. The official immediate death toll was 2,259. Why The Bhopal Disaster Site, 28 Years Later, Is Still A Toxic Killer. NEW DELHI - Who will be able to decontaminate Bhopal? 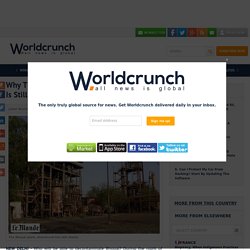 During the night of December 3, 1984, a Union Carbide pesticide plant exploded in the north Indian city of Bhopal, releasing toxic gases that killed between 15,000 and 30,000 people. Nearly 28 years after one of the worst industrial catastrophes in history, toxic chemicals abandoned on the site are still contaminating the groundwater. On September 17, the German Agency for International Cooperation (GIZ) announced that it would not be removing 347 metric tons of waste to incinerate them in Germany, in spite of having started negotiations at the beginning of the year with the Indian government. The reason given for the decision was that the Indian government's refusal to be responsible in case of any accident in the transport and handling of these toxic substances. 2015 Tianjin explosions. Location of the explosion A series of explosions that killed over one hundred people and injured hundreds of others occurred at a container storage station at the Port of Tianjin on Wednesday, 12 August 2015. 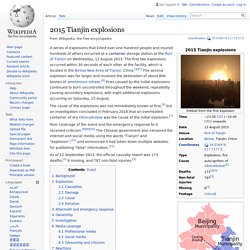 The first two explosions occurred within 30 seconds of each other at the facility, which is located in the Binhai New Area of Tianjin, China.[4][5] The second explosion was far larger and involved the detonation of about 800 tonnes of ammonium nitrate.[6] Fires caused by the initial explosions continued to burn uncontrolled throughout the weekend, repeatedly causing secondary explosions, with eight additional explosions occurring on Saturday, 15 August.

The cause of the explosions was not immediately known at first,[5] but an investigation concluded in February 2016 that an overheated container of dry nitrocellulose was the cause of the initial explosion.[7] As of 12 September 2015, the official casualty report was 173 deaths,[2] 8 missing, and 797 non-fatal injuries.[3] Damage[edit]