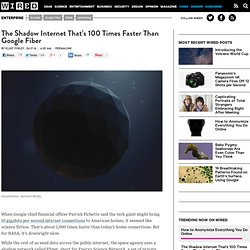 That’s about 1,000 times faster than today’s home connections. But for NASA, it’s downright slow. While the rest of us send data across the public internet, the space agency uses a shadow network called ESnet, short for Energy Science Network, a set of private pipes that has demonstrated cross-country data transfers of 91 gigabits per second–the fastest of its type ever reported. NASA isn’t going bring these speeds to homes, but it is using this super-fast networking technology to explore the next wave of computing applications. In short, ESnet a window into what our computing world will eventually look like. The Other Net The first nationwide computer research network was the Defense Department’s ARPAnet, which evolved into the modern internet.

An Internet Fast Lane. DARPA creating 100 Gigabit per second wireless communication backbone. DARPA’s 100 Gb/s RF Backbone (100G) intends to develop a fiber-optic-equivalent communications backbone that can be deployed worldwide. The goal is to create a 100 Gb/s data link that achieves a range greater than 200 kilometers between airborne assets and a range greater than 100 kilometers between an airborne asset (at 60,000 feet) and the ground. The 100G program goal is to meet the weight and power metrics of the Common Data Link (CDL) deployed by Forces today for high-capacity data streaming from platforms.

A major challenge to providing 100 Gb/s from an airborne asset to the ground is cloud cover. Free-space optical links won’t propagate through the cloud layer, which means RF is the only option. The system will be designed to provide all-weather capability enabling tactically relevant data throughput and link ranges through clouds, fog or rain. DARPA sees the next leap in data throughput coming from improvements in extreme high frequency (EHF) radio technology. Scientists set new speed record for big data. (Phys.org) —IBM today announced that it has achieved a new technological advancement that will help improve Internet speeds to 200 - 400 Gigabits per second (Gb/s) at extremely low power. 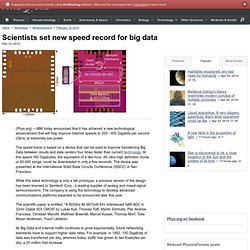 The speed boost is based on a device that can be used to improve transferring Big Data between clouds and data centers four times faster than current technology. At this speed 160 Gigabytes, the equivalent of a two-hour, 4K ultra-high definition movie or 40,000 songs, could be downloaded in only a few seconds. The device was presented at the International Solid-State Circuits Conference (ISSCC) in San Francisco. While this latest technology is only a lab prototype, a previous version of the design has been licensed to Semtech Corp., a leading supplier of analog and mixed-signal semiconductors. The company is using the technology to develop advanced communications platforms expected to be announced later this year. Explore further: Graphene circuit ready for wireless. 339 Gbps - A New 2012 Internet Speed Record. 250x faster than 'superfast' broadband: UK researchers in 'Li-Fi' connectivity breakthrough.

Internet connectivity through light fidelity (Li-Fi) has reached a new milestone, according to UK researchers. 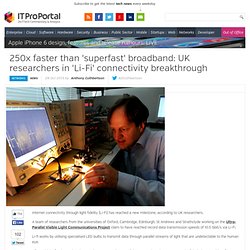 A team of researchers from the universities of Oxford, Cambridge, Edinburgh, St Andrews and Strathclyde working on the Ultra-Parallel Visible Light Communications Project claim to have reached record data transmission speeds of 10.5 Gbit/s via Li-Fi. Li-fi works by utilising specialised LED bulbs to transmit data through parallel streams of light that are undetectable to the human eye. "If you think of a shower head separating water out into parallel streams, that's how we can make light behave," said Professor Harald Haas, a German physicist and one of the project leaders at the University of Edinburgh.

To reach speeds in excess of 10 GBits/s, the researchers used a micro-LED bulb developed at the University of Strathclyde, transmitting 3.5 GBits/s through each of the primary colours – red, green and blue. Gigabit-Per-Second Wireless Tested in New York. The world’s biggest cell-phone maker, Samsung, caused a stir last week by announcing an ultrafast wireless technology that it unofficially dubbed “5G.” 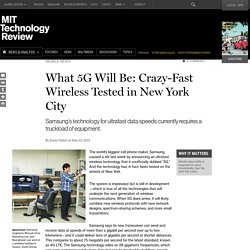 And the technology has, in fact, been tested on the streets of New York. The system is impressive but is still in development—which is true of all the technologies that will underpin the next generation of wireless communications. When 5G does arrive, it will likely combine new wireless protocols with new network designs, spectrum-sharing schemes, and more small transmitters. Samsung says its new transceiver can send and receive data at speeds of more than a gigabit per second over up to two kilometers—and it could deliver tens of gigabits per second at shorter distances.

This compares to about 75 megabits per second for the latest standard, known as 4G LTE. The work has also been tested in the real world. It’s certainly true that so far, the industry has only implemented the most basic features of 4G LTE.