Smuggled futures: the dangerous path of a migrant from Africa to Europe – Global Initiative. In October 2013, Italy captured international headlines when a boat carrying hundreds of asylum seekers sunk off its coast, killing over 360 people. 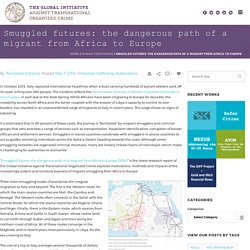 The incident reflects the tremendous increase in African migration to Europe in recent years, in part due to the Arab Spring. While Africans have been migrating to Europe for decades, the instability across North Africa and the Sahel, coupled with the erosion of Libya’s capacity to control its own borders, has resulted in an unprecedented surge of migrants to Italy in recent years. This surge shows no signs of subsiding. It is estimated that in 80 percent of these cases, the journey is “facilitated” by migrant smugglers and criminal groups that who provides a range of services such as transportation, fraudulent identification, corruption of border officials and settlement services. Three main smuggling routes characterize the irregular migration to Italy and beyond. Mrs23. Mp nigeria. AP Human Geography Migration. Political Push and Pull Factors A difficult question in immigration policy is how to distinguish between economic migrants and refugees. 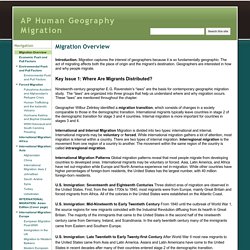 Refugees are pushed out of a country by political factors. People that have been forced to migrate for similar political reasons as refugees but have not crossed an international boundary are called an internally displaced person. The United States, Canada, and Europe accept refugees but do not accept all economic migrants. Mrs23. From Gambia to Italy: a refugee's perilous journey. When Malick Jeng, 19, left Banjul, his hometown and capital of Gambia, on March 14, 2016, he never imagined the risks he would face on his way to Europe. 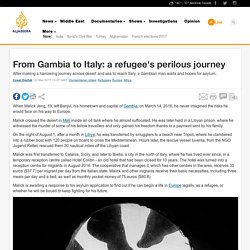 Malick crossed the desert in Mali inside an oil tank where he almost suffocated. He was later held in a Libyan prison, where he witnessed the murder of some of his fellow travellers and only gained his freedom thanks to a payment sent by his family. On the night of August 1, after a month in Libya, he was transferred by smugglers to a beach near Tripoli, where he clambered into a rubber boat with 120 people on board to cross the Mediterranean. Hours later, the rescue vessel Iuventa, from the NGO Jugend Rettet, rescued them 20 nautical miles off the Libyan coast. Malick was first transferred to Catania, Sicily, and later to Biella, a city in the north of Italy, where he has lived ever since, in a temporary reception centre called Hotel Colibri - an old hotel that had been closed for 10 years. 'Push' factor drives migrants away from Libya to Europe.

Media playback is unsupported on your device It is a fool's game trying to cross the Mediterranean in a rubber boat - even as summer beckons, the days are longer and the weather supposedly improves. 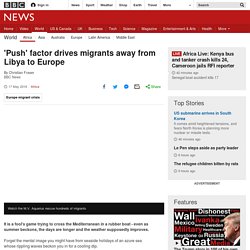 Forget the mental image you might have from seaside holidays of an azure sea whose rippling waves beckon you in for a cooling dip. Economist. THE 16-year-old Gambian who was discovered by a Spanish naval ship as he clung to a fuel tank in open seas will doubtless be haunted by his experience for the rest of his days. 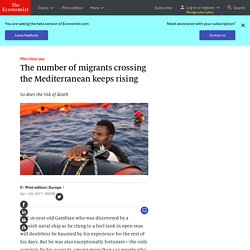 But he was also exceptionally fortunate—the only survivor, by his account, among more than 140 people who left the Libyan port of Sabratha on a large rubber dinghy on March 26th or 27th. It began taking on water a few hours later, he told UN officials from his hospital bed on the Italian island of Lampedusa. Details of sinkings in the central Mediterranean are often sketchy and sometimes unconfirmed. The Libyan Red Crescent said no bodies had been found from the disaster the young Gambian reported. The Gambian footballer who drowned in search of a better life. Toubou people - Wikipedia. The Tubu or Toubou (Old Tebu: "Rock People"[4]) are an ethnic group inhabiting not only northern Chad but also southern Libya, northeastern Niger, and northwestern Sudan. 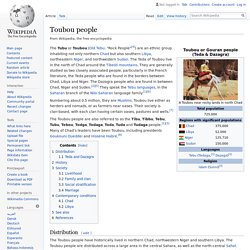 The Teda of Toubou live in the north of Chad around the Tibesti mountains. They are generally studied as two closely associated people, particularly in the French literature, the Teda people who are found in the borders between Chad, Libya and Niger. The Dazagra people who are found in between Chad, Niger and Suden.[2][5] They speak the Tebu languages, in the Saharan branch of the Nilo-Saharan language family.[1][6] Italy migrant crisis: Charities 'colluding' with smugglers. Image copyright AFP An Italian prosecutor says he has evidence some of the charities saving migrants in the Mediterranean Sea are colluding with people-smugglers. 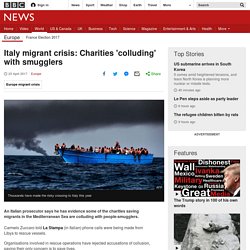 Carmelo Zuccaro told La Stampa (in Italian) phone calls were being made from Libya to rescue vessels. Organisations involved in rescue operations have rejected accusations of collusion, saying their only concern is to save lives. Italy is the main route for migrants trying to reach Europe. Almost 1,000 people are thought to have drowned in waters between Libya and Italy this year, according to the UN refugee agency. African demography: The young continent. ON A trolley in a government clinic in rural Ethiopia lies Debalke Jemberu. 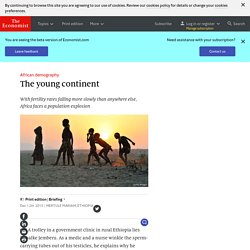 As a medic and a nurse winkle the sperm-carrying tubes out of his testicles, he explains why he decided to have a vasectomy. He is a farmer, growing wheat, sorghum and a local staple grain called teff. But his plot is barely a quarter of a hectare.