Flytrex Sky - Internet drone. Will Internet Access Via Drones Ever Fly? As the World Economic Forum highlighted in a report earlier this year, while our increasingly hyperconnected world brings many benefits, it also exacerbates inequalities for those large portions of the global population that have limited or no internet access. 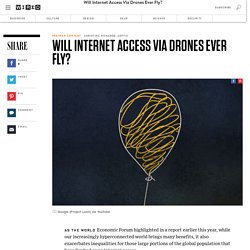 Recently, though, two initiatives — Google’s Project Loon and Mark Zuckerberg’s internet.org — have drawn widespread attention to the challenge of using alternative delivery platforms to bring low cost broadband access to unserved or underserved parts of the world. Project Loon plans to bring internet access to remote locations via a network of high-altitude balloons. As Google describes it, “People can connect to the balloon network using a special Internet antenna attached to their building.

The signal bounces from this antenna up to the balloon network, and then down to the global Internet on Earth. Internet.org is taking a similar approach, except instead of balloons, it envisions using drones as the delivery platform. Facebook’s Giant Internet-Beaming Drone Finally Takes Flight. As the sun rose over the Sonora Desert in late June, Mark Zuckerberg stood beside a runway not far from the Mexican border. 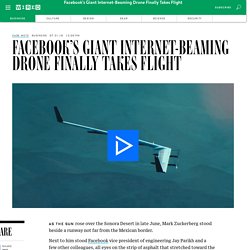 Next to him stood Facebook vice president of engineering Jay Parikh and a few other colleagues, all eyes on the strip of asphalt that stretched toward the horizon. They had arrived a little before dawn, and they were the latecomers. A team of Facebook technicians began prepping the launch at midnight the day before. Among them was Martin Gomez, who sat inside a trailer at the other end of this Army airfield near Yuma, Arizona, taking the crew through its “go”-“no go” checklist. Then, a little past six o’clock, a truck taxied down the runway, pulling Aquila on a massive metal dolly stretched out behind it. Click to Open Overlay Gallery Aquila is the flying drone Zuckerberg and company are designing to provide Internet access in remote parts of the world. Getting the Internet Airborne When flying to such heights, the drone won’t launch with the help of truck and dolly. Forbes Welcome. 3 Ways The Internet Of Things Will Change Every Business. Have you entered the Internet of Things yet? 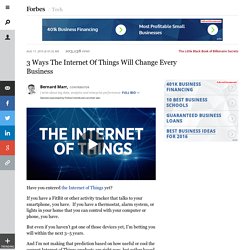 If you have a FitBit or other activity tracker that talks to your smartphone, you have. If you have a thermostat, alarm system, or lights in your home that you can control with your computer or phone, you have. But even if you haven’t got one of those devices yet, I’m betting you will within the next 3–5 years. And I’m not making that prediction based on how useful or cool the current Internet of Things products are right now, but rather based on the fact that I believe the Internet of Things is going to change business at a fundamental level. I believe there are three key ways in which the Internet of Things will change every business: 1. It used to be that we only expected our phones to be able to make phone calls.

The line of Fitbit Internet-enabled products (Photo by Eric Thayer/Getty Images) 2. A big part of the Internet of Things isn’t so much about smart devices, but about sensors. 3. Take John Deere DE +0.27%, for example. Country List for IAWP Membership Fee Information. Return to IAWP Homepage :: Return to the JOIN IAWP Webpage IAWP Developing Country Listing for Reduced Membership Fees Use this URL for a direct listing of economies by the World Bank. 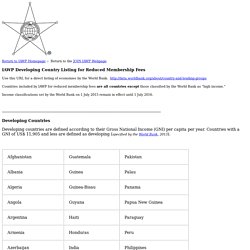 Countries included by IAWP for reduced membership fees are all countries except those classified by the World Bank as "high income. " Income classifications set by the World Bank on 1 July 2015 remain in effect until 1 July 2016. Developing Countries. Solar Impulse Clean Technologies to Fly Around the World.