Understanding the Fractional Reserve Banking System. When you put your money into a savings account or a checking account at a bank, the bank doesn’t just sock it away in a vault underground somewhere. 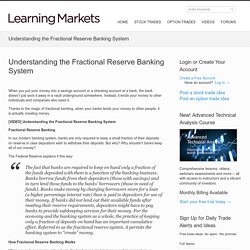 Instead, it lends your money to other individuals and companies who need it. Thanks to the magic of fractional banking, when your banks lends your money to other people, it is actually creating money. [VIDEO] Understanding the Fractional Reserve Banking System Fractional Reserve Banking In our modern banking system, banks are only required to keep a small fraction of their deposits on reserve in case depositors wish to withdraw their deposits.

Bitcoin beat dollar in 2015 — RT Business. Bitcoin is the top performing currency of 2015. 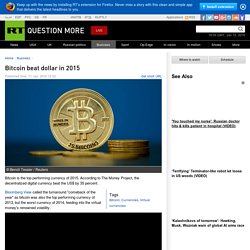 According to The Money Project, the decentralized digital currency beat the US$ by 35 percent . Bloomberg View called the turnaround "comeback of the year" as bitcoin was also the top performing currency of 2013, but the worst currency of 2014, feeding into the virtual money's renowned volatility.

Along with the currency’s recent popularity has come the re-emergence of bitcoin mining. Anyone with the technological resources and brainpower to solve complex computational problems can mine bitcoin, and get paid for their efforts in the digital currency, therefore creating more bitcoin in the market. While mining became less popular as the rate fell from its peak of $1,137 in 2013 to $13 less than two years later, it seems that groups of miners that share computing power to harvest bitcoin more quickly are making a comeback.

Greece to receive 1000 Bitcoin ATMs AnonHQ. Economy Bitcoin ATMs could spring up across Greece as soon as October, as citizens and businesses become increasingly desperate to move their money despite capital controls. 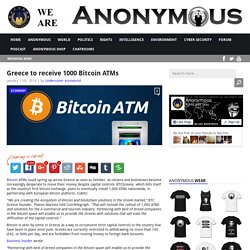 BTCGreece, which bills itself as the country’s first bitcoin exchange, plans to eventually install 1,000 ATMs nationwide, in partnership with European bitcoin platform, Cubits: 10 Ways Bitcoin Is Better Than The Federal Reserve. Source: www.activistpost.com | Original Post Date: December 4, 2013 – The Federal Reserve System is a parasite that feeds off human suffering. 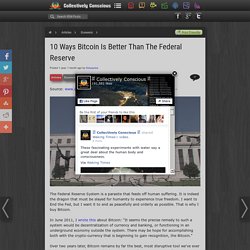 It is indeed the dragon that must be slayed for humanity to experience true freedom. I want to End the Fed, but I want it to end as peacefully and orderly as possible. That is why I buy Bitcoin. In June 2011, I wrote this about Bitcoin: “It seems the precise remedy to such a system would be decentralization of currency and banking, or functioning in an underground economy outside the system. Money & Life (2013) Money & Life is a passionate and inspirational essay-style documentary that asks a provocative question: can we see the economic crisis not as a disaster, but as a tremendous opportunity? 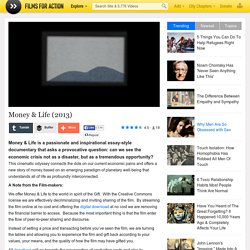 This cinematic odyssey connects the dots on our current economic pains and offers a new story of money based on an emerging paradigm of planetary well-being that understands all of life as profoundly interconnected. The Disconnection between Money and Reality. I remember a time when I was in 10th grade algebra class and the teacher introduced the concept of negative numbers. 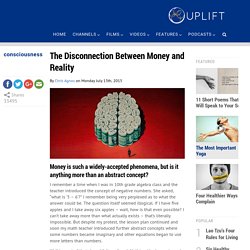 She asked, “what is ‘5 – 6’?” I remember being very perplexed as to what the answer could be. The question itself seemed illogical. If I have five apples and I take away six apples – wait, how is that even possible? I can’t take away more than what actually exists – that’s literally impossible. Walking out of that class, I felt confused. “When will we realize, we can’t eat money?” I wondered why it would be important to learn about concepts that had no connection to the natural world. Understanding our monetary system Many people really do not understand our monetary system. Mises Institute. Zopa - Peer-to-peer Lending, Loans & High Interest on Savings. Reinventing Money. General Green Economics New Economics Foundation: The London based organization which gathers information on new economics across the board. 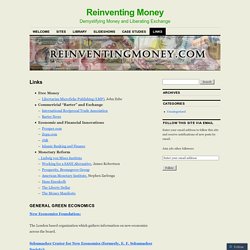 Schumacher Center for New Economics (formerly, E. F. Schumacher Society): This website provides comprehensive coverage of new paradigm economics, including local currencies, community land trusts, and community supported agriculture (CSA). International Forum on Globalization: Includes work by David Korten, Jerry Mander, and others. Geolibertarian Website: “We Geolibertarians distinguish ourselves from right-wing, “royal” libertarians by our profound respect for the principle that one has private property in the fruits of one’s labor. Books by Henry George: Henry George was one of the most insightful and astute political economists ever. Micro-credit The Grameen Foundation-USA: Information about the Grameen Bank and other micro-credit programs around the world. Operational Community Exchange Systems. Austrian School of Economics: The Concise Encyclopedia of Economics. The Austrian school of economics was founded in 1871 with the publication of Carl Menger’s Principles of Economics. menger, along with william stanley jevons and leon walras, developed the marginalist revolution in economic analysis. 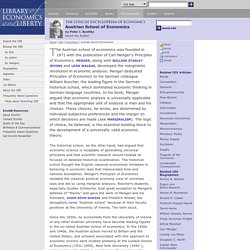 Menger dedicated Principles of Economics to his German colleague William Roscher, the leading figure in the German historical school, which dominated economic thinking in German-language countries. In his book, Menger argued that economic analysis is universally applicable and that the appropriate unit of analysis is man and his choices. These choices, he wrote, are determined by individual subjective preferences and the margin on which decisions are made (see marginalism).