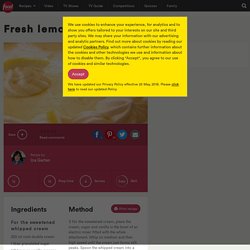 Whip on medium and then high speed until the cream just forms still peaks. Spoon the whipped cream into a pastry bag fitted with a large star tip. 2) For the mousse, whisk together the 3 whole eggs, 3 egg yolks, 250g sugar, lemon zest, lemon juice and a pinch of salt in a large heat-proof bowl. Place the bowl over a pan of simmering water and cook, stirring constantly with a wooden spoon, for about 10 to 12 minutes until the mixture is thick. When mixture thickens, stir with a whisk if desired. 3) Take off the heat and set aside for 15 minutes. 4) Place half the *egg whites and a pinch of salt in the bowl of an electric mixer fitted with the whisk attachment. 5) Carefully fold the beaten whites into the cold lemon mixture with a rubber spatula. Pinterest. Chocolate mousse with brioche recipe - Great British Chefs. Pinterest. Pinterest. Pinterest. Pinterest. 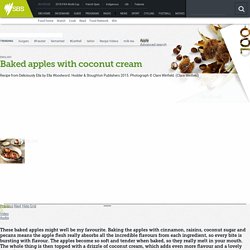 Use an apple corer to take the core out of the apples so that there is a hole from top to bottom. Mix the raisins, cinnamon, pecans and coconut sugar together. Place the apples on a baking tray and stuff the core with the raisin mix, then sprinkle all of the leftover mix around the apples. Drizzle 6 tbsp water over the leftovers around the apples. Place the apples in the oven and allow them to bake for 30 minutes, until they’re totally soft. To make the coconut cream, just before the apples finish cooking, put the coconut cream in a blender with 10 tablespoons of boiling water and all the other ingredients and blend until smooth.

To serve, put each apple in a bowl to serve with a scoop of the raisin mix from the tray, and then pour the coconut cream over everything. Note • If you don’t have an apple corer, then cut around the core with a knife and scoop out the core with a spoon. Rhubarb and custard. Setting time 3 hours or overnight. 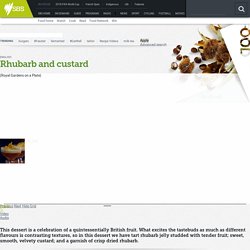 Place four glasses or glass serving dishes in the fridge to chill well. Preheat the oven to 100°C (80°C fan-forced/gas ¼). For the dried rhubarb crisp, using a sharp vegetable peeler, carefully shave the rhubarb lengthways until you have at least 6 pieces, then put these in a small bowl. Chop the remaining rhubarb into 1 cm (½ in) pieces and set aside. 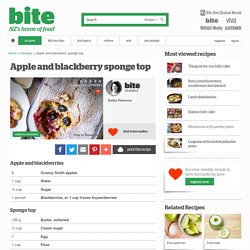 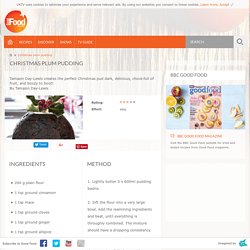 Lightly butter 3 x 600ml pudding basins. 2. 3. 4. Christmas plum pudding. Brioche and Butter Pudding. A while back, I started the National Collection of Bread and Butter Pudding Recipes:) and to date, there are six other recipes on my site. 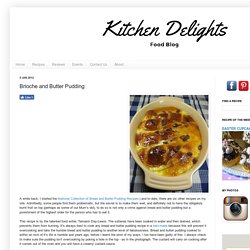 Admittedly, some people find them problematic, but the secret is to make them well, and definitely not to have the obligatory burnt fruit on top (perhaps as some of our Mum's did), to do so is not only a crime against bread and butter pudding but a punishment of the highest order for the person who has to eat it. Glazed Pears with Mascarpone - Maggie Beer. Step 1: Scrape out the vanilla seeds from the bean and set aside. 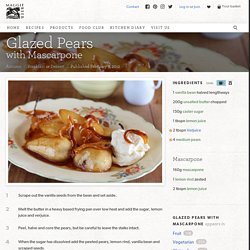 Step 2: Melt the butter in a heavy based frying pan over low heat and add the sugar, lemon juice and verjuice. Step 3: Peel, halve and core the pears, but be careful to leave the stalks intact. Step 4: When the sugar has dissolved add the peeled pears, lemon rind, vanilla bean and scraped seeds. Step 5: Cook over low heat for approximately 1 hour or until the pears are an even golden colour. If you have chosen ripe ones, this will take less time, but be careful not to overcook them while colouring. Step 6: Check that the pears are done by inserting a thin-bladed knife or skewer into the centre and if there is no resistance when you pull it out, then they are ready. Step 7: Gently fold the lemon rind and juice into the mascarpone; do not beat it as the mascarpone will become too runny. Recipe for slow cooker poached pears in caramel sauce. Slow cooker poached pears in caramel sauce From the pantry, you'll need: brown sugar, ginger root, unsalted butter, cinnamon. 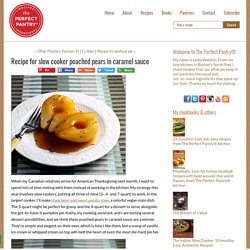 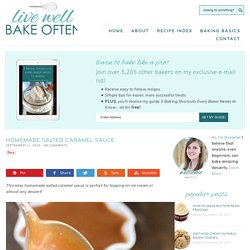 Have you ever made your own caramel sauce? It’s actually pretty easy to make and beats anything you would buy from the store. I usually have most of the ingredients on hand and it only takes about 15 minutes to make, not including the cooling time. For this recipe you’ll just need a few simple ingredients – water, sugar, heavy cream, butter, vanilla, and some salt. I love salted caramel, but if you’re not a fan you can easily reduce the amount of salt to your personal preference.

A few things that are important for this recipe. Best Ever Blueberry Cobbler - Wicked Good Kitchen. Sticky Toffee Pudding Cake Recipe. If you’ve never had sticky toffee pudding cake, what are you waiting for? 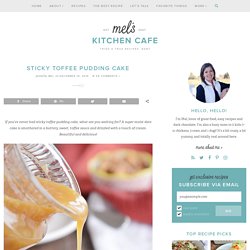 Spread the crumble into the prepared tray and cook for 10 minutes or until golden. How To Make Hokey Pokey Ice Cream. Hokey pokey ice-cream has a special place in the hearts of all New Zealanders, and with good reason: the combination of honeycomb chunks stirred through vanilla ice-cream is almost irresistible. Jane Hingston, in her ABC of Kiwi Food, writes that many New Zealanders would remember making hokey pokey in science at school to observe the "spectacular chemical changes when baking soda is mixed with golden syrup and sugar". She also writes that one theory suggests the name hokey pokey comes from the term "hocus pocus ", in a reference to the magic that happens during the cooking process. For siblings Michael and Meropi Matsis, who make and sell organic Zany Zeus ice-cream, cheese, yoghurt and milk in Lower Hutt, near Wellington, New Zealand, the love of hokey pokey meant there was no question they would include it in their ice-cream repertoire.

"It's one of those iconic ice-creams," says Michael Matsis. "We couldn't not sell it. GOLDEN SYRUP PANCAKES – Ruth Pretty Catering. Severed with Macerated Tamarillos, Ricotta & Grilled Bacon This is a hearty brunch dish. If you can use Zany Zeus ricotta as it is very creamy, acidic and sweet. 225g (1 1/2 cups + 2 tbsp) self raising flour ¼ tsp salt 35g (3 tbsp) castor sugar 2 eggs 285ml (1 cup plus 2 tbsp plus 1 tsp) milk. Stuffed Baked Apples with Sticky Apple Syrup. Article. Grilled Fresh Figs with Ice Cream & Honey. I like to grill these figs just as dinner is winding down. They take only a couple of minutes to prepare and since they're cooked over a low flame, you can use the last dying embers of a charcoal grill (or just switch on the gas grill). Heat the gas grill to medium low or prepare a low charcoal fire. Set the figs cut side down on a baking sheet and brush the rounded side with the oil.

Grilled figs with honey ricotta. Dalmatian Fresh Fig Tart - Chefs Pencil. Lemon Chicken with Figs recipe. By rainstripe. Ruth Pretty recipe: Wintry pavlova. Last updated 05:00 21/07/2013 The ultimate celebration cake in New Zealand is the pavlova, and with the Royal New Zealand Ballet celebrating its 60th birthday this month, I thought it timely to resurrect the pav. Research has proven that, yes, pavlova did originate in New Zealand, not in Australia, and it was created in honour of Russian ballerina Anna Pavlova after a tour of New Zealand in the 1920s. CREMA CATALANA BAKED APPLES – Ruth Pretty Catering.

Apple Shortcake – Ruth Pretty Catering. My mother made great apple shortcake and I am sure it was out of the Edmonds’ Cookbook but with her twists and she never passed the recipe on. Here today is my recipe that incidentally is also a winner! Princess Diana’s Favorite Bread & Butter Pudding Recipe. Bread and Butter Pudding recipe. My favourite recipe: Gary Rhodes. On more mundane matters - though bread and butter pudding can never really be described as mundane - here are a couple of tips for cooking this dish: never rush the pudding in the oven and, to check that it is cooked, touch the top with your fingertips to make sure you've got that "creme brûlée" wobbly finish. Pâte sucrée recipe from PS Desserts by Philippa Sibley. Lemon tart recipe from PS Desserts by Philippa Sibley.

Dalmatian Fresh Fig Tart - Chefs Pencil. Lemon Tart – Italian Leafy Lemons with Crème Fraiche - Chefs Pencil. The UK has seen the rise of culinary experts over the last 10 years, spawning dozens of Michelin chefs and television talent, all as innovative but realistic as some of the best business entrepreneurs. Since 2002, when Robert Thompson retained a second Michelin Star under Germain and Annie Schwab at Winteringham Fields, he opened the doors of this chic, new world of the culinary art and it was clear that he was typical of this new wave of chefs when he became the country’s youngest Michelin starred chef in 2006. Inspired to cook by brother Patrick, he acquired a love of cooking at 10 years old and dreamed of owning his own restaurant one day. His most memorable food memory was when he visited the city of Paris with his brother, they ate at the Guy Savoy and Ducasse trying the tasting menus and eating too much but the thrill of dining and the love of fine foods became his great desire.