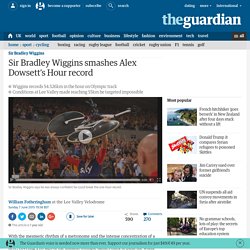 The 2012 Tour de France winner and London 2012 gold medallist managed to race a dizzying one and a half kilometres beyond the previous mark of 52.937km set by his fellow Briton Alex Dowsett, whose tenure at the top of the table lasted only five weeks. The hour gives an instant picture of how fast a cyclist can go under prevailing conditions at a certain point in history and it is this essential simplicity which has given the record a lustre that has lasted since its inception in 1893, in spite of a recent run of convoluted rule changes.

Bradley Wiggins: I hated being the winner of the Tour de France. Sir Bradley Wiggins has admitted to mixed feelings about his success, claiming media scrutiny following his 2012 Tour de France win left him hating cycling, and that losing his title was “a monkey off my back”. 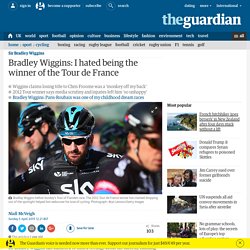 “I still look back and think: ‘How did I win the Tour, going day to day under that pressure?’” Wiggins said in an interview with cyclingtips.com. “That period afterwards, just hating being the winner of the Tour de France, hating cycling, hating the media for asking me questions about Lance Armstrong. Hating Lance Armstrong for giving Oprah that interview. And being the winner of the Tour in that period, having to answer all the questions.” Bradley Wiggins accused of bending rules and using non-regulation bike after breaking Alex Dowsett's hour record.

Less than 24 hours after setting a new world record, Sir Bradley Wiggins’ exploits in the London velodrome, where on Sunday evening he covered 54.526km in one hour, were the subject of a complaint by a coach to the previous holder, who alleged that he broke two rules. 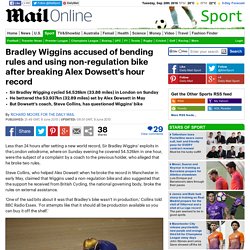 Steve Collins, who helped Alex Dowsett when he broke the record in Manchester in early May, claimed that Wiggins used a non-regulation bike and also suggested that the support he received from British Cycling, the national governing body, broke the rules on external assistance. ‘One of the sad bits about it was that Bradley's bike wasn't in production,’ Collins told BBC Radio Essex. ‘For attempts like that it should all be production available so you can buy it off the shelf.’ Sir Bradley Wiggins broke the hour record distance that was set by Alex Dowsett in London on Sunday. World Anti-Doping Agency.