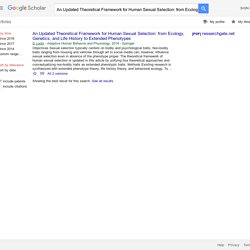 Non-bodily traits ranging from housing and vehicles through art to social media can, however, influence sexual selection even in absence of the phenotype proper. Male and Female Perception of Physical Attractiveness. An Eye Movement Study Ray Garza, Department of Psychology and Communication, Texas A&M International University, Laredo, TX 11548, USA. 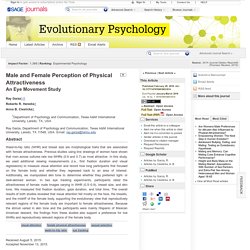 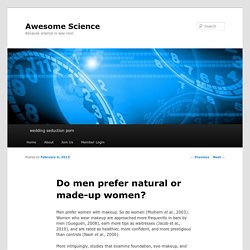 So do women (Mulhern et al., 2003). Neoteny: In Response to International Women's Day. Topic: How Men Select Women (1/1) Women with high reproductive value attract men. 19-year-old women are likely to produce the greatest number of children—twice as many as 30-year-old women. 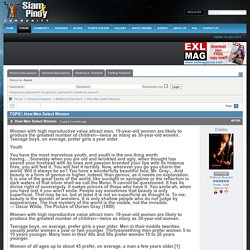 Teenage boys, on average, prefer girls a year older. Youth You have the most marvelous youth, and youth is the one thing worth having. "Waist-to-Hip Ratio, Attractiveness and Gender Discrimination" by Pazhoohi, Farid - Gender & Behaviour, Vol. 9, Issue 1, June 2011. Abstract Women with lower waist-to-hip ratio are considered more attractive to the men. 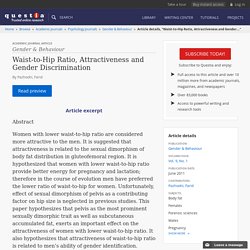 It is suggested that attractiveness is related to the sexual dimorphism of body fat distribution in gluteofemoral region. It is hypothesized that women with lower waist-to-hip ratio provide better energy for pregnancy and lactation; therefore in the course of evolution men have preferred the lower ratio of waist-to-hip for women. Genetic neoteny – how delayed genes separate human brains from chimps – Not Exactly Rocket Science. Be it in sports or comedy, they say that timing is everything. 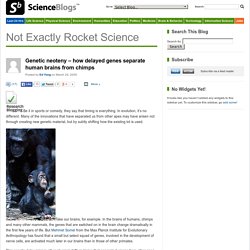 In evolution, it’s no different. Many of the innovations that have separated us from other apes may have arisen not through creating new genetic material, but by subtly shifting how the existing lot is used. Neoteny and Two-Way Sexual Selection in Human Evolution. By David Brin, Ph.D. 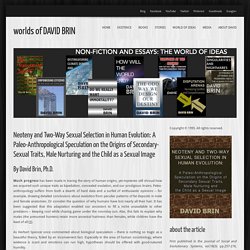 Much progress has been made in tracing the story of human origins, yet mysteries still shroud how we acquired such unique traits as bipedalism, concealed ovulation, and our prodigious brains. Paleo-anthropology suffers from both a dearth of hard data and a surfeit of enthusiastic opinions -- for example, drawing detailed conclusions about evolution from peculiar patterns of fat deposits in male and female anatomies. Or consider the question of why humans have lost nearly all their hair. It has been suggested that this adaptation enabled our ancestors to fill a niche unavailable to other predators -- keeping cool while chasing game under the noonday sun. Being More Infantile May Have Led to Bigger Brains. For decades scientists have noted that mature humans physically resemble immature chimps—we, too, have small jaws, flat faces and sparse body hair. 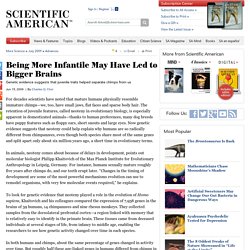 The retention of juvenile features, called neoteny in evolutionary biology, is especially apparent in domesticated animals—thanks to human preferences, many dog breeds have puppy features such as floppy ears, short snouts and large eyes. Now genetic evidence suggests that neoteny could help explain why humans are so radically different from chimpanzees, even though both species share most of the same genes and split apart only about six million years ago, a short time in evolutionary terms. Neoteny in Humans. Patterns of Neoteny in the relative skull growth in Homo and Pan Succesive stages of skull development from infancy to maturity in chimpanzees (top three) and humans (bottom pair). 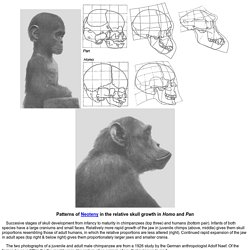 Infants of both species have a large craniums and small faces. Relatively more rapid growth of the jaw in juvenile chimps (above, middle) gives them skull proportions resembling those of adult humans, in which the relative proportions are less altered (right). Continued rapid expansion of the jaw in adult apes (top right & below right) gives them proportionately larger jaws and smaller crania.

The two photographs of a juvenile and adult male chimpanzee are from a 1926 study by the German anthropologist Adolf Naef. Photos from Naef, 1926; Text material © 2009 by Steven M. Neoteny. This diagram shows that the head becomes proportionately smaller and the legs become proportionately longer as humans mature. 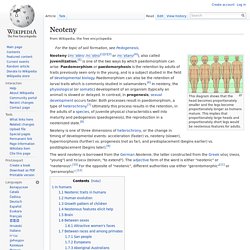 This implies that proportionately large heads and proportionately short legs would be neotenous features for adults. Neoteny is one of three dimensions of heterochrony, or the change in timing of developmental events: acceleration (faster) vs. neoteny (slower), hypermorphosis (further) vs. progenesis (not as far), and predisplacement (begins earlier) vs. postdisplacement (begins later).[9] The word neoteny is borrowed from the German Neotenie, the latter constructed from the Greek νέος (neos, "young") and τείνειν (teínein, "to extend").

The adjective form of the word is either "neotenic" or "neotenous".[10] For the opposite of "neotenic", different authorities use either "gerontomorphic"[11] or "peramorphic".[12] In humans[edit] Neoteny and Two-Way Sexual Selection in Human Evolution. By David Brin, Ph.D. The Effects of Two-Way Human Sexual Selection Not only are human females compelled to compete for mates, something uncommon in most species, they appear also to have been the sex most changed (at least in outward appearance) by runaway sexual selection in Homo sapiens, making women the least primate-looking of all higher primates.

In comparison, males have been left relatively untouched [16]. Moreover, there is a predictable and tragic consequence to the development of neoteny as an emblem of adult female attractiveness. Consider it this way. But paedomorphism means resemblance to children! Lecture Notes 6 of 6. Dr. D.R.Johnson Throughout human evolution there has been a tendency to change skull proportions in two ways: first to increase the size of the brain and second to decrease the size of the jaws, jaw muscles and teeth. This has changed the overall shape of the skull: taken together these changes produce a taller skull, with less ridges for muscle attachment and a shorter retrousse face. The position of the foramen magnum has also changed, decreasing the need for powerful neck muscles. These changes produce a striking resemblance between juvenile apes (where many adult characteristics have yet to develop) and man .

This is not a new idea. He attributed these changes to cessation of brain growth, whilst the rest of the skull, i.e. the facial skeleton continued to grow. Politically it was better to think that the Orang had developed too far - i.e. become specialised.