Recommendation 1. Recommendation 2. Recommendation 3. BPA and how to reduce exposure! Bisphenol A (BPA) is an industrial chemical widely used in common plastic products, such as baby bottles, children’s toys, and the linings of most food and beverage cans. 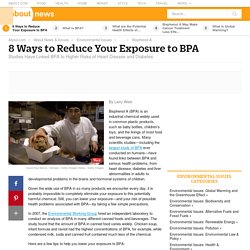 Many scientific studies—including the largest study of BPA ever conducted on humans—have found links between BPA and serious health problems, from heart disease, diabetes and liver abnormalities in adults to developmental problems in the brains and hormonal systems of children. Given the wide use of BPA in so many products we encounter every day, it is probably impossible to completely eliminate your exposure to this potentially harmful chemical. Still, you can lower your exposure—and your risk of possible health problems associated with BPA—by taking a few simple precautions. In 2007, the Environmental Working Group hired an independent laboratory to conduct an analysis of BPA in many different canned foods and beverages. Contamination at the Local Level. Research out of the US has shown that eggs from chickens in urban backyards contain higher than average levels of heavy metals, particularly lead. 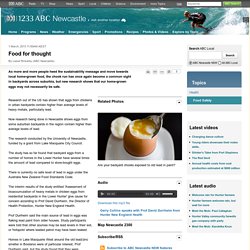 Now research being done in Newcastle shows eggs from some suburban backyards in the region contain higher than average levels of lead. The research conducted by the University of Newcastle, funded by a grant from Lake Macquarie City Council. The study has so far found that backyard eggs from a number of homes in the Lower Hunter have several times the amount of lead compared to store-bought eggs. There is currently no safe level of lead in eggs under the Australia New Zealand Food Standards Code. James Hardie asbestos factory site. Fibre cement sheets rolling out at the James Hardie plant in Camellia. 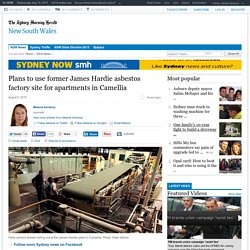 Photo: Peter Morris Follow more Sydney news on Facebook What may be some of Sydney's least loved land – the birthplace of asbestos manufacturing in Australia – has become the latest object of desire for residential property developers. The plan to erect high-rise apartments on the former James Hardie factory site in western Sydney would require the removal of enough asbestos to fill more than two dozen Olympic-sized swimming pools. The former James Hardie site in Camellia, pictured here in 2012. Broome s Roebuck Bay in toxin fear. Landfill and its Impact on Health. Air Pollution – Emissions into Atmosphere Landfills create a clear and obvious threat to human health as well as a threat to our environment from the hazardous contaminated air emissions emitted from the landfill biodegradation. 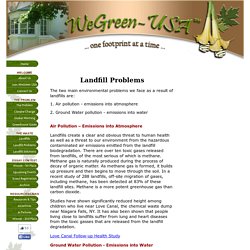 There are over ten toxic gases released from landfills, of the most serious of which is methane. What is a Contaminated Site? Contaminated sites WEB dec09. Site contamination. Lead poisoning and health. Lead Poisoning: A Historical Perspective. By Jack Lewis[EPA Journal - May 1985] Hence gout and stone afflict the human race; Hence lazy jaundice with her saffron face; Palsy, with shaking head and tott'ring knees. 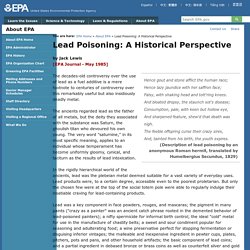 And bloated dropsy, the staunch sot's disease; Consumption, pale, with keen but hollow eye, And sharpened feature, shew'd that death was nigh. The feeble offspring curse their crazy sires, And, tainted from his birth, the youth expires. The Love Canal Tragedy. By Eckardt C. 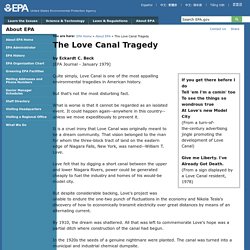 Beck [EPA Journal - January 1979] If you get there before I do Tell 'em I'm a comin' too To see the things so wondrous true At Love's new Model City (From a turn-of-the-century advertising jingle promoting the development of Love Canal) Give me Liberty. I've Already Got Death. (From a sign displayed by a Love Canal resident, 1978) Quite simply, Love Canal is one of the most appalling environmental tragedies in American history. Sydney Olympics and Toxic Waste. To win the Olympic Games for Sydney, the Sydney Olympics 2000 Bid Limited (SOBL) had to overcome an awesome public relations hurdle. 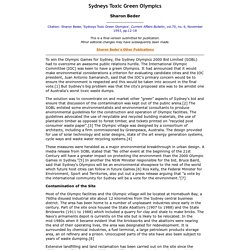 The International Olympic Committee (IOC) was keen to have a green Olympics. It had announced that it would make environmental considerations a criterion for evaluating candidate cities and the IOC president, Juan Antonio Samaranch, said that the IOC's primary concern would be to ensure the environment is respected and this would be taken into account in the final vote.[1] But Sydney's big problem was that the city's proposed site was to be amidst one of Australia's worst toxic waste dumps. 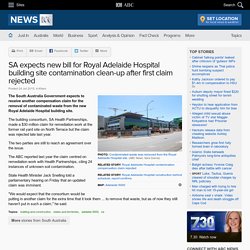 The building consortium, SA Health Partnerships, made a $30 million claim for remediation work at the former rail yard site on North Terrace but the claim was rejected late last year. The two parties are still to reach an agreement over the issue. The ABC reported last year the claim centred on remediation work with Health Partnerships, citing 24 instances of unknown soil contamination. State Health Minister Jack Snelling told a parliamentary hearing on Friday that an updated claim was imminent. "We would expect that the consortium would be putting in another claim for the extra time that it took them ... to remove that waste, but as of now they still haven't put in such a claim," he said. 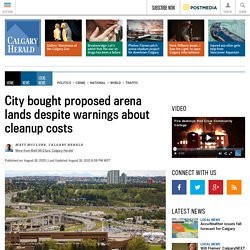 Dozens of monitoring wells drilled on the site of a former wood-preserving plant after the deal was inked in 2009 revealed the amount of toxic soil left by the operator was much larger than originally believed and extended under much of the 4.2-hectare parcel the city had just purchased. Remediation costs for the 18-hectare area once occupied by Canada Creosoting Ltd. had been estimated at between $30 million and $100 million when the city purchased the parcel and approved its West Village redevelopment plan. A spokeswoman for the Canadian Taxpayers Federation said city council and its administrators behaved irresponsibly. Only Dale Hodges and Andre Chabot dissented. mmcclure@calgaryherald.com. Creosote contamination at proposed arena site to be studied. As Calgarians await more details of a massive Flames arena project proposed for land on the western edge of downtown, a city-owned agency is now looking to hire a consultant to study the scope of environmental contamination in the area. 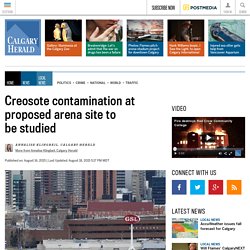 Home to auto dealerships and a Greyhound bus station, the West Village land being touted for a new hockey arena, football stadium and amateur sports fieldhouse has long presented an environmental headache. Much of the area is contaminated from a former creosote plant. Previous estimates have put the cleanup costs at between $50 million and $300 million. Calgary Municipal Land Corp. Error Page. Asbestos has been found at the Palmerston Regional Hospital Site and at the Darwin RAAF base, where workers are wearing asbestos protective suit and masks while working on the site.

Source: News Corp Australia POTENTIALLY millions of tonnes of asbestos lie buried or dumped around Darwin — a hidden legacy of Cyclone Tracy’s devastation that continues to plague the city. Fiskville inquiry: Allegations water 'deliberately contaminated' at Victorian firefighting training base. Updated Water at the Country Fire Authority's (CFA) Fiskville training base in western Victoria was allegedly deliberately contaminated as part of a biological experiment, a Victorian parliamentary inquiry has heard.

The inquiry is examining claims dozens of firefighters who worked or trained at Fiskville suffered cancers linked to dangerous firefighting chemicals over several decades. Metropolitan Fire Brigade firefighter Mick Tisbury told the inquiry a scientist told him the potentially dangerous bacteria and fire retarding organism, pseudomonas aeruginosa, was added to water at the base as a cheap way to treat hydrocarbons. Guidelines for Asbestos-Contaminated Sites - May 2009. How Does Water Pollution Affect Humans? - The World Counts. TheWorldCounts, 15 April, 2014 Is Your Water Clean? Humans have established communities and flourished around sources of clean, drinkable water since the beginning of time.

It’s vital to our survival. Do you know that you can survive several days without food but not without water? It’s heartbreaking to know that millions of people worldwide do not have access to this most basic need, and are dying of thirst and water borne diseases. The Effects of Soil Pollution on Humans. Soil pollution occurs when soil contains chemicals that are toxic or otherwise dangerous for humans and other living things. Technology Transfer Network Air Toxics Web site. Originally published as EPA 450/3-90-022 March 1991. Site Contamination and Health Concerns. Massachusetts law requires that human health be protected from harmful exposures to chemicals at hazardous waste sites. Tulla-Exec-Summary.pdf. Remediation Australasia. Remediation Australasia issue 16.