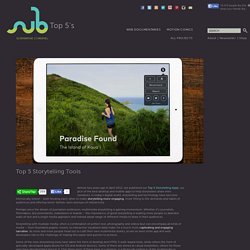 In today’s digital world, storytelling and technology have become intrinsically linked – both feeding each other to make storytelling more engaging, more fitting to the demands and habits of audiences and offering never-before-seen avenues of interactivity. Perhaps once the dream of journalism professors, multimedia storytelling is gaining momentum. Whether it’s journalists, filmmakers, documentarists, marketeers or brands – the importance of good storytelling is leading more people to abandon walls of text and a single media approach and instead adopt range of different media to draw in their audiences.

Some of the new storytelling tools have taken the form of desktop and HTML 5 web-based tools, while others the form of specially-developed applications for iOS and Android devices. Free Digital Storytelling Tools For Teachers and Students. No Tinder, dê match com a Reserva. Beta - Snapchat. Online dating: Love at first byte. Untitled. The preceding discussions of prevalence, the mechanics of the online dating process, and mathematical matching algorithms converge upon the conclusion that online dating differs fundamentally from conventional offline dating (the uniqueness question). 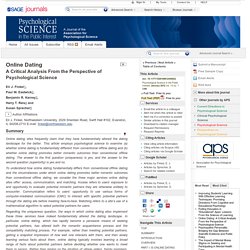 We now examine whether online dating fosters better romantic outcomes than conventional offline dating does (the superiority question). Toward that end, we critically evaluate dating sites’ claims of superiority before reviewing the scholarly literature relevant to evaluating whether specific implementations of access, communication, and matching offered by online dating are likely to yield superior romantic outcomes. An Online Dating Site for Singles. Online dating has its pros and cons, meta-analysis says. Social scientists have confirmed what most singletons have known for years: Online dating is a crapshoot. 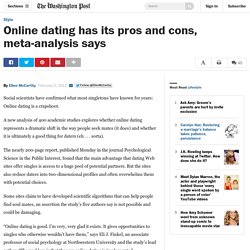 A new analysis of 400 academic studies explores whether online dating represents a dramatic shift in the way people seek mates (it does) and whether it is ultimately a good thing for daters (eh . . . sorta). The nearly 200-page report, published Monday in the journal Psychological Science in the Public Interest, found that the main advantage that dating Web sites offer singles is access to a huge pool of potential partners. Online dating has its pros and cons, meta-analysis says. Online Dating: A Critical Analysis From the Perspective of Psychological Science - Association for Psychological Science.

Read the Full Text Many of us enter the dating pool looking for that special someone, but finding a romantic partner can be difficult. 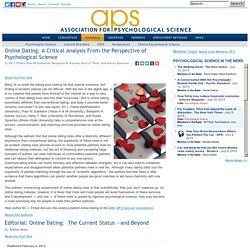 With the rise of the digital age, it is no surprise that people have flocked to the Internet as a way to take control of their dating lives and find their “soul-mate.” Customer-jobs-trigger-questions.pdf. 5 Ways to Overcome Dating Anxiety - MIND Guest Blog - Scientific American Blog Network. Valentine's brunch. 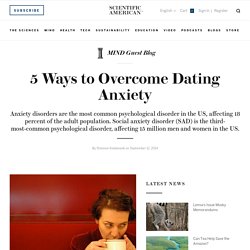 (Amit Gupta via Flickr) Anxiety disorders are the most common psychological disorder in the US, affecting 18 percent of the adult population. Social anxiety disorder (SAD) is the third-most-common psychological disorder, affecting 15 million men and women in the US. The DSM-5 defines social anxiety as the “persistent fear of one or more situations in which the person is exposed to possible scrutiny by others and fears that he or she may do something or act in a way that will be humiliating or embarrassing.”

Those who are shy, if not socially anxious, tend to experience social situations in a more reserved, tense and uncomfortable manner, especially when meeting new people. Shy Passions - 100% Free Social Networking for Shy Singles. Tinder Rejection Statistics - Business Insider. In real life, people date and subject themselves to a lot of rejection just to find The One (or The Two or The Three). 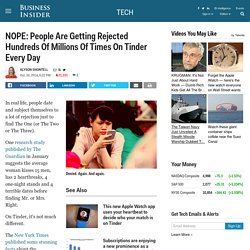 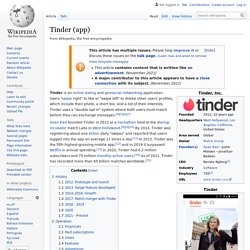 Operation. Strangely clever dating site requires access to your Facebook account. A new study strengthens the theory that men often feel threatened when they have female bosses — so much so that they respond aggressively. 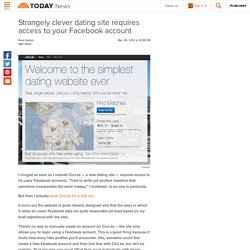 Men pushed for bigger salaries when negotiating with a woman, and while they were happy to offer the lion's share of a bonus to a male boss, they were far less generous to a female supervisor. Getty Images stock The findings have big real-world implications, researchers say. The findings add to an already large body of evidence supporting the idea that men, in general, don't like being bossed around by women, says Ekaterina Netchaeva, an assistant professor of management and technology at Bocconi University in Milan, Italy, who led the study. Circl.es: Facebook-Connected Online Dating That Isn't Creepy - ReadWrite. Most 21st century humanoids have probably either at one point tried online dating or dissed online dating. 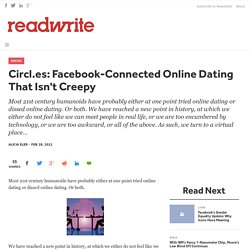 Or both. We have reached a new point in history, at which we either do not feel like we can meet people in real life, or we are too encumbered by technology, or we are too awkward, or all of the above. As such, we turn to a virtual place where people mingle: The Internet. And as always, the Internet provides a solution. Almost. Namoro e encontros é no Match Brasil. Namoro e encontros é no Match Brasil. AdopteUnMec : 16,1 millions de chiffre d’affaires et 70% de croissance. Tinder: 5 Reasons The Dating App Works For Women. It seems many people still falsely assume that women are not interested in casual sex -- an outdated notion that is painfully obvious in the world of hook-up apps. 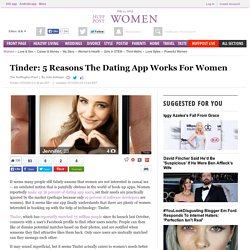 Women reportedly make up 36 percent of dating app users, yet their needs are practically ignored by the market (perhaps because only 19 percent of software developers are women). But it seems like one app finally understands that there are plenty of women interested in hooking up with the help of technology: Tinder. Tinder, which has reportedly matched 75 million people since its launch last October, connects with a user's Facebook profile to find other users nearby.

People can then like or dismiss potential matches based on their photos, and are notified when someone they find attractive likes them back. PlentyofFish. PlentyOfFish (POF) is an online dating service, popular primarily in Canada, the United Kingdom, Ireland, Australia, Brazil,[2] and the United States.[3] The company, based in Vancouver, British Columbia[4] generates revenue through advertising.[5] While it is free to use, PlentyOfFish offers premium services as part of their upgraded membership, such as seeing when a user profile was viewed, and allowing users to see whether a message has been read and/or deleted.[6] History[edit] Markus Frind, CEO and Founder of PlentyOfFish Media Inc., graduated in 1999 from British Columbia Institute of Technology with a diploma in Computer Systems Technology.[7] In 2004, PlentyOfFish became a full-time business for Frind.[8] He ran the site independently until 2008, when he began hiring other employees at his new Vancouver headquarters.[9] In 2009, PlentyOfFish also launched a contest with Lady Gaga allowing single members to go together and meet the singer during her "Fame Monster" tour.[10]

100% Gratuito Teste de Personalidade – Química no Relacionamento. Papodehomem.com. Circl.es: Meet The Latest Dating Site That Uses Facebook To Help You Find Love. Online dating is a hard nut to crack. First of all, it’s a very personal process ported to a largely impersonal medium — and then there’s the creep factor. Next, it’s a big business, but a small set of names dominate mindshare.