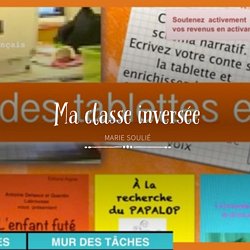 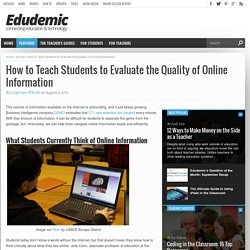 Business intelligence company DOMO estimates that 571 new websites are created every minute. With that amount of information, it can be difficult for students to separate the gems from the garbage, but, fortunately, we can help them navigate online information easily and efficiently. What Students Currently Think of Online Information Image via Flickr by USACE Europe District. For Students, Why the Question is More Important Than the Answer. Thinkstock In a traditional classroom, the teacher is the center of attention, the owner of knowledge and information. 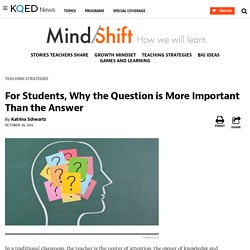 Teachers often ask questions of their students to gauge comprehension, but it’s a passive model that relies on students to absorb information they need to reproduce on tests. Integrating Technology In The Classroom: 24 EdTech Tools And 5 Benefits Of Educational Technology Integration. There are many ways of integrating technology in the classroom; ways that do not directly involve the use of computers. 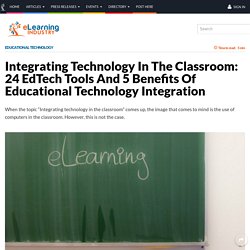 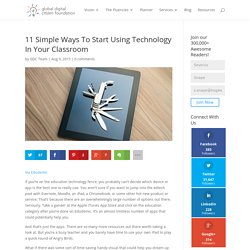 You aren’t sure if you want to jump into the edtech pool with Evernote, Moodle, an iPad, a Chromebook, or some other hot new product or service. That’s because there are an overwhelmingly large number of options out there. Seriously. Take a gander at the Apple iTunes App Store and click on the education category after you’re done on Edudemic. And that’s just the apps. What if there was some sort of time-saving handy visual that could help you dream up nearly a dozen new ways to use technology in your classroom? This article was featured on Edudemic on September 16 2014 and was written by Jeff Dunn. Sketchnoting. ALiEM Where is the pedagogy in flipped classrooms? Flipped Classroom Model Flipped classrooms can be generally thought of as a teaching approach where learners are first exposed to new content before class on their own and then process the information in a facilitated, group setting during class. 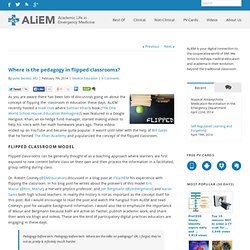 Dr. Robert Cooney (@EMEducation) discussed in a blog post at iTeachEM his experience with flipping the classroom. In his blog post he writes about the pioneers of this model Eric Mazur (@Eric_Mazur), a Harvard physics professor, and Jon Bergmann (@jonbergmann) and Aaron Sams both high school teachers. In reality the history is not as important as the concept itself for this post. Pedagogy before tech. What is Pedagogy? Pedagogy is basically the practice of teaching used to help learners with their lifelong endeavors. Active Learning Strategies One example of a poor pedagogical approach is the traditional lecture when it comes to learning. Other active learning strategies have been addressed in the literature. Role of Textbooks References: Image. How to Make Sure Your Students Have Access to Flipped Learning Content. This is a concern that is frequently cited when teachers start down the road to the flipped classroom. 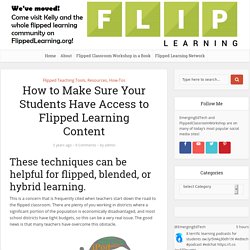 There are plenty of you working in districts where a significant portion of the population is economically disadvantaged, and most school districts have tight budgets, so this can be a very real issue. The good news is that many teachers have overcome this obstacle. One Example from the Flipped High School This excerpt is from the CNN article, “My View: Flipped classrooms give every student a chance to succeed”. Clintondale High School is a widely known flipped teaching and learning success story, they have flipped their entire curriculum across all grades, and they even purchased the URL “flippedhighschool.com”, where you can find them online. A Realist's Guide to Flipping the Classroom. The Teacher's Guide To Flipped Classrooms. Since Jonathan Bergman and Aaron Sams first experimented with the idea in their Colorado classrooms in 2004, flipped learning has exploded onto the larger educational scene. 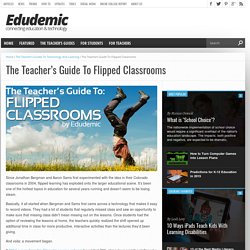 It’s been one of the hottest topics in education for several years running and doesn’t seem to be losing steam. Basically, it all started when Bergman and Sams first came across a technology that makes it easy to record videos. They had a lot of students that regularly missed class and saw an opportunity to make sure that missing class didn’t mean missing out on the lessons.

Once students had the option of reviewing the lessons at home, the teachers quickly realized the shift opened up additional time in class for more productive, interactive activities than the lectures they’d been giving. Flipped Classroom on Pinterest. S Guide to the Flipped Classroom for 2014. For the past few years, Edudemic has covered the rise of the flipped classroom and its subsequent evolution. 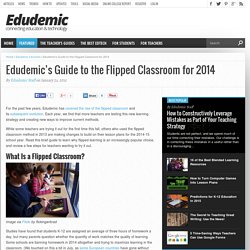 Each year, we find that more teachers are testing this new learning strategy and creating new ways to improve current methods. While some teachers are trying it out for the first time this fall, others who used the flipped classroom method in 2013 are making changes to build on their lesson plans for the 2014-15 school year. Read this brief guide to learn why flipped learning is an increasingly popular choice, and review a few steps for teachers wanting to try it out. What Is a Flipped Classroom? Image via Flickr by flickingerbrad Studies have found that students K-12 are assigned an average of three hours of homework a day, but many parents question whether the quantity of work matches the quality of learning.