New York Pop-Up: New York's Sneakeasy came to 45 Grand Street from March 20 to 26. The activation showcased the... A Fold Apart: Origamist Robert Lang's Incredible Paper Creations. Discover Nature - This is crazy. What do you think? Havaianas Made of Brazilian Summer. Havaianas, the footwear brand, has launched “Made of Brazilian Summer”, a global campaign designed to bring a little of Brazil to the rest of the world. 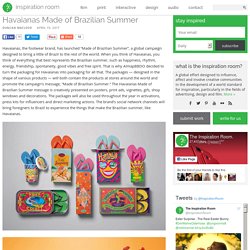 When you think of Havaianas, you think of everything that best represents the Brazilian summer, such as happiness, rhythm, energy, friendship, spontaneity, good vibes and free spirit. That is why AlmapBBDO decided to turn the packaging for Havaianas into packaging for all that. The packages — designed in the shape of various products — will both contain the products at stores around the world and promote the campaign’s message, “Made of Brazilian Summer.” CASSANDRA - RESPECT YOUR ELDERS. Stunning Sand And Gold Painting Technique. The event ended with a cake-decorating hour for guests, with individual cakes provided by Sweets by E and Classic Bakery....

Arctic World Archive Will Keep The World's Data Safe From Cyber And Nuclear Attacks. Why it matters to you Paranoid about losing your cat photos, or something even more important? 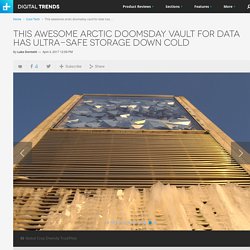 This underground vault stores data as photosensitive film to keep it safe from any possible attack. Need a light? Here Are 12 of the Coolest Lamps Of All Time. The lightbulb has evolved dramatically since Thomas Edison first demonstrated his newfangled incandescent in 1879. 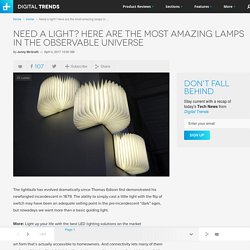 The ability to simply cast a little light with the flip of switch may have been an adequate selling point in the pre-incandescent “dark” ages, but nowadays we want more than a basic guiding light. More: Light up your life with the best LED lighting solutions on the market With the advent of LEDs, design enthusiasts are making lighting into something of an art form that’s actually accessible to homeowners. A floating techno-libertarian city might be coming to the Pacific. In May, a group will gather in Tahiti to discuss building floating cities off the French Polynesian coast. 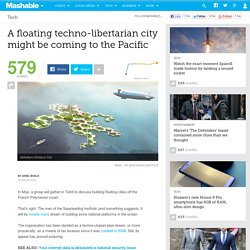 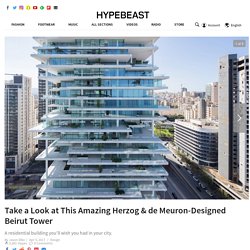 The residential terraces, which overlook the city’s marina, are a part of a larger regeneration project that’s developing around St. George’s hotel. The stunning structure is made up of five modular floors with overhanging ceilings that extend over the homes by at least 60 cm, which provide shade and create balconies. The studio gave this quote about the building, saying, “Five principles define the project: layers and terraces, inside and outside, vegetation, views and privacy, light and identity, The result is a vertically layered building: slabs of varying sizes allow for interplay between openness and privacy that fosters flexible living between inside and outside.” 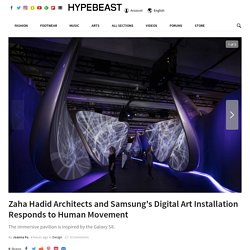 Titled “Unconfined,” the digital-architecture installation is based off of Samsung’s newest Galaxy S8 smartphone, drawing inspiration from the device’s seamless, curving screens and digital graphics. The immersive pavilion leads guests through a hall of hanging displays that are activated through movement, exposing them to “a fusion of architecture, light, moving image and sound design,” says Universal Everything creative director Mike Hughes.

The installation will be on display at the Tortona Design Week Milan from from April 4 to April 9. Ministry of Supply. Service Connects Stores With Pop-Up Retail Locations. Appear Here allows brands big and small rent out store space for a limited time In an age where brick-and-mortar stores are closing down by the minute, Appear Here‘s service is invaluable to brands who are seeking the flexibility of a temporary location or who just can’t afford a flagship just yet. 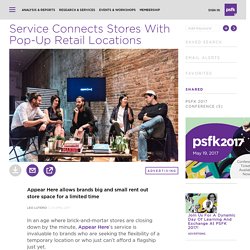 Appear Here works a lot like Airbnb but instead of apartments, people can rent retail spaces at a daily rate. This makes it a perfect source of venues for brands or artists wanting to create pop-up stores and other short-term retail experiences. Appear Here’s model is all about simplicity. In fact, the platform works both ways. 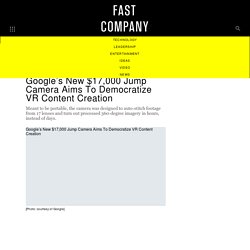 Ranging from consumer-grade devices that cost a few hundred dollars to those meant for Hollywood filmmakers that come with five-figure price tags, the goal is the same: to ensure that there’s more and more VR content so that people buy more VR headsets. Last week it was Facebook, which unveiled its professional-quality x24 and x6 cameras. Today, it’s Google’s turn, with the unveiling of the company’s second high-end VR camera, the Jump Halo. Developed by Google and made by China’s Yi, the $17,000, 17-lens Jump Halo—and its associated post-processing software and distribution system—is meant to shoot high-quality 360-degree video, stitch it together automatically, and be light enough at 7.5 pounds to take just about anywhere.

Google launched its first Jump camera last year. The Jump Halo can shoot 8K by 8K stereoscopic 360 video at 30 frames per second, or 6K by 6K at 60 frames per second. JLG- World's Tallest Selfie Stick - Photomadic. HTC Launches A Monthly Subscription For VR Apps. The Viveport service lets you test five apps at a time for $6.99 per month In celebration of the first anniversary of the release of the Vive virtual reality headset, HTC is launching a subscription service for VR content. 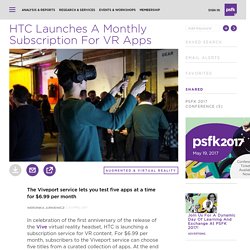 For $6.99 per month, subscribers to the Viveport service can choose five titles from a curated collection of apps. At the end of each monthly subscription period, they can decide if they want to keep the selected apps or swap them for newer releases. HTC hopes that the service will serve as a promotional tool for developers that want to stand apart from the virtual reality platform’s vast library of content. This month’s staff picks include VDA winners and runner-ups: Fantastic Contraption, theBlu, Apollo 11, Mars Odyssey and Firebird, among others.

London Is Building What They Call The World's First 'Smart Street' The street will be in London's former Bird Street will be only for pedestrians, and brimming with innovative technology The New West End Company, a business management firm based in London, is getting ready to launch the first “smart street” ever. 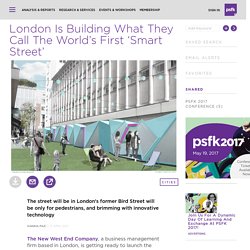 This novel concept is taking technology, bringing it to its most physical expression and combining it with retail space. The smart street which will be in London’s former Bird Street will be only for pedestrians, and brimming with innovative technology such as PaveGen, which generates electricity from the movements of those walking by and paint that purifies the air.

The street will be lined with pop-up shops through a partnership with Appear Here, a marketplace for retail space. “A curated collection of pioneering pop-ups will further transform Bird Street with a revolving mix of cutting edge fashion, technology and alfresco dining,” according to New West End. 7 Things That Will Ruin Your General Session (and What to Do to Avoid Them) At the Victoria's Secret Angel Escape, held at a massive private estate in Indio, an enormous balloon installation from Geronimo... 10 Vertical Gardens That Bring Greenery to Boring Walls. Vertical gardens have become much more popular as it seems that horizontal space has been growing smaller and smaller. Living walls can exist both indoors and out making them a great yet unconventional design option for your walls. They not only bring a natural element to a space, but they can easily become works of art in their own right.

Plus, they help purify the air we breathe, so it seems like a win-win, right? Take a look at ten walls that have been turned into live vertical gardens for everyone’s viewing pleasure. Photo courtesy of Patrick Blanc. This Pharrell-Assisted Video’s Use of Split-Screen Will Blow Your Mind. Ikea Had a Great Reaction to Balenciaga Making a $2,145 Version of Its 99-Cent Blue Bag – Adweek.

The designers at Balenciaga must be big Ikea fans, because the French fashion house just unveiled a fancy new leather bag that looks strikingly like Ikea’s famous blue tote—though the price tag looks a whole lot different. I’m Fluent In 5 Computer Languages. Why Can’t I Switch Off The Bedside Light In A Marriott? The experience, gushes the hotel website, will be delightful, with staff who will be your new best friends; luxuries beyond the dreams of Caligula. Just look at this shot of a couple lounging in bathrobes that are so fluffy they’ll have to sit on their suitcases when they steal them. Yet it’s not really infinity pools, spas, and marble staircases that create a hotel experience. Somewhere way, way, down the pyramid of basic human needs lurk the real things that define our stay. Doritos is selling chips with the Guardians Of The Galaxy 2 soundtrack installed on the bag. A better shelter for refugees. Download: Original Size: 435822402 URL: Download: High resolution Size: 125.86 MB URL: Download: Low resolution Size: 18.78 MB URL: Published: 08/16/2016 Duration: 04:50 Size: 415.63 MB.

Product : Better Shelter. Travel Oregon Salmon 360° Architects want to put skyscrapers inside hollowed-out Giant Sequoia trees in California. MUJI's Minimalist Huts Are Set to Go on Sale. In November 2015, MUJI revealed a series of minimalist micro-homes during Tokyo Designers Week. US considers cabin laptop ban on flights from UK airports. The Trump administration is considering barring passengers flying to the US from UK airports from taking laptops into the cabins, sources have told the Guardian.

The proposed ban would be similar to one already imposed on travellers from several Middle Eastern countries. British officials understand that their US counterparts are looking at extending the ban – which prevents any electronic devices larger than a smartphone being taken as carry-on luggage – to flights from Europe. One Whitehall source suggested to the Guardian that although it was not certain that the ban would be extended to the UK, the US was considering doing so. The US government unexpectedly imposed the ban in late March for flights from 10 airports in the Middle East.

Passengers must stow their devices in checked-in baggage on flights from the affected airports in Egypt, Jordan, Kuwait, Morocco, Qatar, Turkey, Saudi Arabia and the United Arab Emirates.