US Grid Operators - Gigawatt Energy Storage Plans. How can U.S. transmission grids and wholesale energy markets adapt to the gigawatts of energy storage coming online over the next decade? 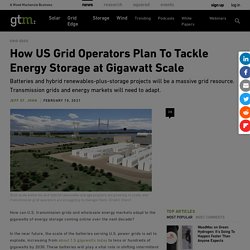 In the near future, the scale of the batteries serving U.S. power grids is set to explode, increasing from about 1.5 gigawatts today to tens or hundreds of gigawatts by 2030. These batteries will play a vital role in shifting intermittent wind and solar power from when it’s produced to when it’s needed and serving broader grid services needs on an increasingly decarbonizing grid. But as a resource that can both absorb and discharge energy at a moment’s notice, batteries are very different from both dispatchable generators and intermittent wind and solar farms. Atlast - FakeBacon. The Third Industrial Revolution: A Radical New Sharing Economy. Youval Harari - 21 Lessons foe 21st Century. 5 ways Blockchain could disrupt the sharing economy’s disrupters. Shell Has A Bigger Clean Energy Plan Than You Think. May 1st, 2020 by Tina Casey Royal Dutch Shell has gotten some pretty good reviews for the laundry list of clean energy items in its new decarbonization plan, but there is one little item that hasn’t gotten much attention, and it could have an impact on all those other oil and gas giants out there. 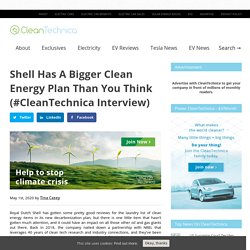 Back in 2018, the company nailed down a partnership with NREL that leverages 40 years of clean tech research and industry connections, and they’ve been busy at work shoveling new clean tech into the market as fast as they can go. On of three new startups in the GCxN clean tech incubator, Icarus RT is developing a system that harvests and stores clean energy for power generation (photo cropped, courtesy of Icarus RT). NREL & Shell Pair Up For World-Changing Clean Energy For those of you new to the topic, NREL, is the National Renewable Energy Laboratory, located in Colorado. 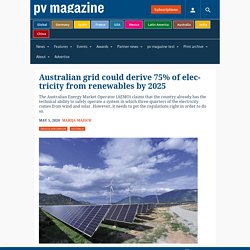 However, this will only be possible if market conditions and the regulatory environment are modified. On Thursday, AEMO released its much-anticipated Renewable Integration Study (RIS), which is the first stage of a multi-year plan to ensure system security in a future National Electricity Market (NEM) characterized by a high share of renewable resources. The report take projections from AEMO’s 20-year grid transition blueprint, the Integrated System Plan, and confirms that the grid is already capable of handling a very high penetration of intermittent renewables. Drones, robots, and super sperm - the future of farming. Renewables overtake coal-fired power generation for first time - MINING.COM. Image of Ocotillo Express Wind Project in California by slworking2. 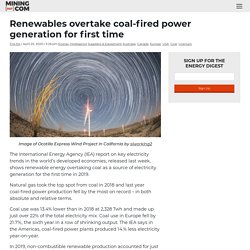 Universal Community Solar Revolution Brewing Under COVID-19 Crisis. April 25th, 2020 by Tina Casey The US Department of Energy is doubling down on a commitment to ensure that every household and business in the US has access to renewable energy by 2025. 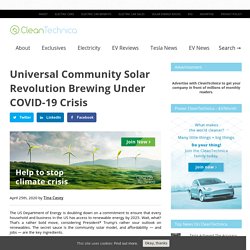 Wait, what? That’s a rather bold move, considering President* Trump’s rather sour outlook on renewables. The secret sauce is the community solar model, and affordability — and jobs — are the key ingredients. The new National Community Solar Partnership aims for universal solar access + jobs, jobs, jobs (image via US DOE, cropped). Community Solar For Everyone, Obama Edition. How Dying Forests and a Swedish Teenager Helped Revive Germany's Clean Energy Revolution. Power Switch: First in a continuing series about the German energy transition. 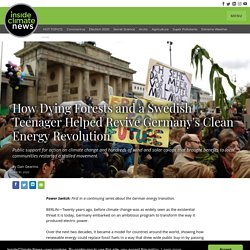 BERLIN—Twenty years ago, before climate change was as widely seen as the existential threat it is today, Germany embarked on an ambitious program to transform the way it produced electric power. Over the next two decades, it became a model for countries around the world, showing how renewable energy could replace fossil fuels in a way that drew wide public buy-in by passing on the benefits—and much of the control—to local communities. The steps Germany took on this journey, and the missteps it made along the way, provide critical lessons for other countries seeking to fight climate change. Last summer, I went to Germany to figure out where the energy transition, or "Energiewende," stands today, with climate change blaring like a siren across a nation already alarmed. Record-breaking heat in successive summers had left the fabled German forests dotted with clumps of dead brown trees.

Germany is Getting Hotter. California seeks 'army of volunteers' for coronavirus crisis. Urging Californians to answer the immediate needs of the coronavirus pandemic and create a lasting commitment to community volunteerism, Gov. 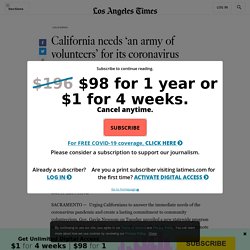 Gavin Newsom on Tuesday unveiled a new statewide program designed to enlist more of the state’s residents to offer both in-person and remote help for those in need. “We’ve launched this initiative in order to launch an army of volunteers to express themselves, day in and day out, as only Californians can,” Newsom said. “Not only to meet this moment, but to prepare to meet subsequent moments.”