Inicio Biblioteca Digital Mundial. Josan Gonzalez. Notebook’s 7th Writers Poll: Fantasy Double Features of 2014 on Notebook. How would you program this year's newest, most interesting films into double features with movies of the past you saw in 2014?﻿ 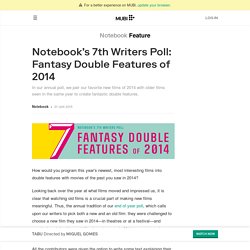 Looking back over the year at what films moved and impressed us, it is clear that watching old films is a crucial part of making new films meaningful. Thus, the annual tradition of our end of year poll, which calls upon our writers to pick both a new and an old film: they were challenged to choose a new film they saw in 2014—in theatres or at a festival—and creatively pair it with an old film they also saw in 2014 to create a unique double feature. All the contributors were given the option to write some text explaining their 2014 fantasy double feature.

What's more, each writer was given the option to list more pairings, with or without explanation, as further imaginative film programming we'd be lucky to catch in that perfect world we know doesn't exist but can keep dreaming of every time we go to the movies. WHY: Experimental journeys through time and memory. The Best Movie Posters of 2014 on Notebook. 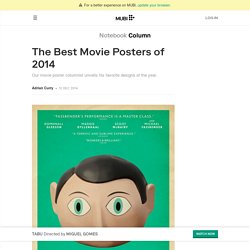 Frank Those of us who care about movie posters often complain about “big head” posters from Hollywood studios, but the design for Lenny Abrahamson’s Frank is the ne plus ultra of big head posters: a poster for a film about a big head. The head in question is the papier-mâché noggin worn by Michael Fassbender’s title character, which was inspired by the nearly identical prop worn by Chris Sievey, a.k.a. Games Screenshots Gallery. Concept Art Gallery. Starlog Magazine Issue 184. Reviews of Powell and Pressburger works.

Reviews of Powell and Pressburger works The reviews have been divided into the following sections: The Masters - Michael Powell & Emeric Pressburger The Films - Listed by year then alphabetically The People - Actors, Actresses, crew Miscellaneous - Everything else Some articles may deal with more than one person or film, where this happens we have tried to cross reference them. 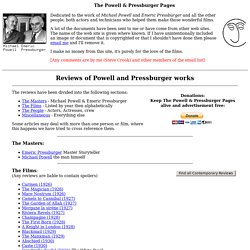 The Masters: Emeric Pressburger Master Storyteller Michael Powell the man himself The Films: (Any reviews are liable to contain spoilers) The People: Note: I have only included the people that I have articles about. Rob Ager's film analysis page. DO NOT USE GMAIL ACCOUNTS WHEN ORDERING (see video above for reasons why) Follow me on Twitter and Facebook I also have a series of short text based articles and reviews of films on my AGER ON FILM blog Dozens more of my articles and videos on other subjects can be viewed here More film analysis currently on my 'to do' list(in no particular order - they'll probably take years to complete): Audition Barton Fink Blue Velvet Eraserhead Fight Club Indiana Jones and the Temple of Doom Lolita: book and film combined analysis Monty Python and the Holy Grail The Master 1984: book and film combined analysis One Flew Over The Cuckoo's Nest Platoon vs Full Metal Jacket Poltergeist Rango Star Trek: The Motion Picture There Will Be Blood Videodrome WALL E If you would like to submit a request for a particular film to be reviewed feel free to contact me., but check the FAQ section of the site first as several popular requests are already listed there. 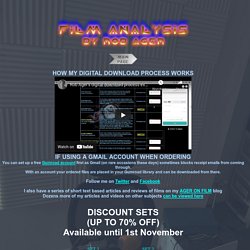 Video Game Wallpapers - Page 2. Movie Screencaps.com - Movie caps galore! Blade Runner (1982) - Movie Screencaps.com. In a cyberpunk vision of the future, man has developed the technology to create replicants, human clones used to serve in the colonies outside Earth but with fixed lifespans. 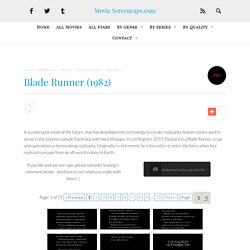 In Los Angeles, 2019, Deckard is a Blade Runner, a cop who specializes in terminating replicants. Originally in retirement, he is forced to re-enter the force when four replicants escape from an off-world colony to Earth. If you like and use our caps, please consider leaving a comment below - we'd love to see what you made with them! :) Alien (1979) - Movie Screencaps.com. A commercial crew aboard the deep space towing vessel, Nostromo is on its way home when they pick an SOS warning from a distant planet. 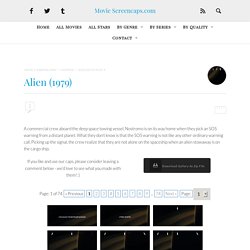 What they don’t know is that the SOS warning is not like any other ordinary warning call. Picking up the signal, the crew realize that they are not alone on the spaceship when an alien stowaway is on the cargo ship. Creative Uncut - Video Game Art & Character Artwork. The Art of in-game Photography. "To me, photography is an art of observation. 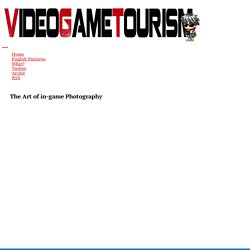 It's about finding something interesting in an ordinary place... I've found it has little to do with the things you see and everything to do with the way you see them.” Elliott Erwitt Photography is everywhere. With the rise of mobile devices, we are used to carrying powerful cameras literally in our pockets, at any time, anywhere - and so we take pictures. And, of course, we still immortalize the special moments in our lives - the grand vistas, the momentous occasions, the triumphs and memorable achievements. Games are spaces of experience as much as entertainment. Electric Blue Skies - Videogame as a form of Art. Movie Screencaps.com - Movie caps galore! A growing archive of stills from the best films ever. Concept Art Gallery. Games Screenshots Gallery. Concept Art, Design and Illustration Directory. PhotoshopGAF: Slap a video game title on an appropriate but unrelated movie poster - Page 7. 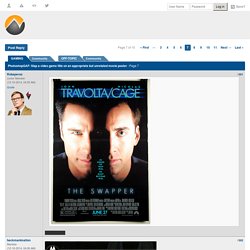 I was just sitting here thinking of a game to fit to that but the obvious thing didn't come to me! Film Index @ Evan E. Richards. Pascal Blanché's Derelict Planet. Moebius - M̲elt. Moebius A look back at Jean Giraud. 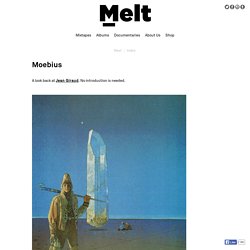 No introduction is needed.