In Translation: Belal Fadl on Egypt becoming "A Nation of Snitches" Belal Fadl, an Egyptian screenwriter and columnist who has continued to speak his mind on the brutality and hypocrisy of the country's military regime, has published a five-part series with the news site Mada Masr on the history of domestic espionage in Egypt. 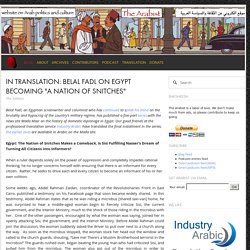 Our good friends at the professional translation service Industry Arabic have translated the final installment in the series; the earlier ones are available in Arabic on the Mada site. Egypt: The Nation of Snitches Makes a Comeback. Is Sisi Fulfilling Nasser’s Dream of Turning All Citizens into Informers? It’s Time to Bring Imperialism Back to the Middle East. Though imperialism is now held in disrepute, empire has been the default means of governance for most of recorded history, and the collapse of empires has always been messy business, whether in China and India from antiquity through the early 20th century or in Europe following World War I. 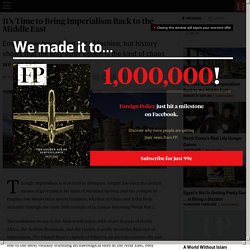 The meltdown we see in the Arab world today, with chaos in parts of North Africa, the Arabian Peninsula, and the Levant, is really about the final end of imperialism. The Islamic State’s capture of Palmyra, an ancient caravan city and one of the most visually stunning archaeological sites in the Near East, only punctuates this point. Palmyra represents how the region historically has been determined by trade routes rather than fixed borders. Its seizure by the barbarians only manifests how the world is returning to that fluid reality. It is actually three imperial systems whose collapse we are now witnessing in the Middle East. The second group of Middle Eastern states is even more unstable. Persian Empire, anyone?

"Iran is piling one brick on the other," warns one pundit with solemnity. 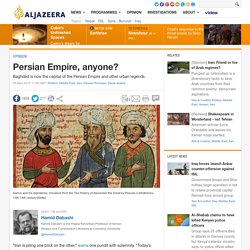 "Today's Iranians, with their Persian heritage, are on the march as surely as were the armies of Xerxes 2,500 years ago. " Usually such right-wing wizardry is the premise upon which is launched the criticism of US President Barack Obama's evident determination to pursue a diplomatic solution to the Iranian nuclear issue.

"Desperate for a legacy," this particular warmonger surmises, "our president obsesses about a deal [no matter how wretched] on Iran's nuclear programme, while ignoring Iran's aggression across the Middle East". “We should recognize that there are other imperialisms”: A Marxist dissident explains what the left gets wrong about Russia. Russia today is not as depicted on Russia Today, the English-language news network established by the Russian government in 2005 that paints a capitalist state led by a right-wing nationalist in pseudo-left colors: the anti-America, almost, where the poor are always fed – not just shot dead by racist police – and foreign policy is motivated not by cynical self-interest, but a dogged, one might even say principled determination to stand athwart U.S. imperialism and yell “stop!” 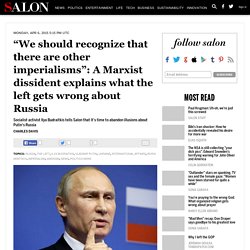 The critiques the network airs of poverty in the United States and Washington’s bloody wars abroad are an amusing, completely fair rejoinder to the State Department’s habit of pointing out the human rights hypocrisy of everyone else, but the implication that things are any better in Moscow is no less amusing to leftists in Russia who are aware an Occupy Red Square, like Occupy Wall Street, would be crushed with all the skull-cracking efficiency a state can muster.

Why the details of the Iran deal don’t matter. Negotiating with Iran over its nuclear program has become something of a national pastime and a cottage industry in U.S. foreign policy circles. 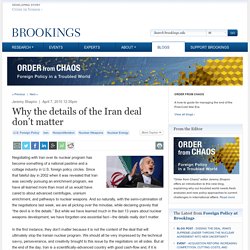 Rewarding repression: Proposals to aid the Eritrean government. Hastily drawn up and poorly considered plans by several governments appear about to provide succour and support to one of Africa’s most notorious regimes. 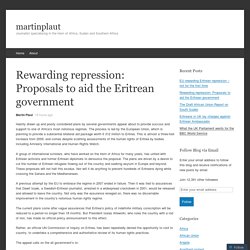 The process is led by the European Union, which is planning to provide a substantial bilateral aid package worth € 312 million to Eritrea. This is almost a three-fold increase from 2009, and comes despite scathing assessments of the human rights of Eritrea by bodies including Amnesty International and Human Rights Watch. A group of international scholars, who have worked on the Horn of Africa for many years, has united with Eritrean activists and former Eritrean diplomats to denounce the proposal.

The plans are driven by a desire to cut the number of Eritrean refugees flowing out of the country and seeking asylum in Europe and beyond. These proposals will not halt this exodus. Russia fails in bid to stop UN staff benefits for all gay couples. Fathom – Making Sense of the Israeli Elections. Zu spät, zu zaghaft, zu unambitioniert. Wenn Berlin mehr Verantwortung will, muss es mehr in Prävention investieren 01.01.2015 | von Omid Nouripour. 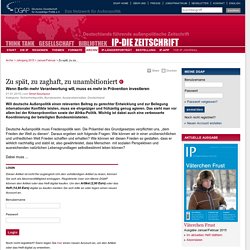 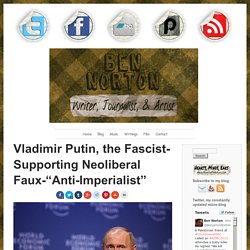 This is odd, considering Putin is an ardent proponent of neoliberal policies, engages with imperialist or imperialist-backed powers when it suits his interests, and even flirts with fascism. Fascism. Boko Haram, and Massacres Ruled by Whim. Photo MAIDUGURI, Nigeria — They came in the dead of night, their faces covered, riding on motorcycles and in pickup trucks, shouting “Allahu akbar” and firing their weapons. 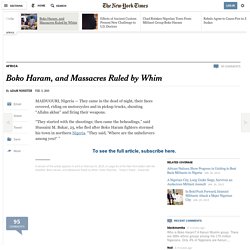 “They started with the shootings; then came the beheadings,” said Hussaini M. Bukar, 25, who fled after Boko Haram fighters stormed his town in northern Nigeria. “They said, ‘Where are the unbelievers among you?’ ” Women and girls were systematically imprisoned in houses, held until Boko Haram extracted the ones it had chosen for “marriage” or other purposes. “They were parking” — imprisoning — “young girls and small, small children, parking them in the big houses,” said Bawa Safiya Umar, 45, whose 17-year-old son was killed when her town fell under Boko Haram’s control. Refugees flocking into this besieged provincial capital describe a grim world of punishment, abduction and death under Boko Haram in the Islamist quasi state it has imposed in parts of northern . 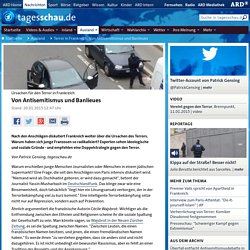 Around the Halls: What is ISIS' Strategy? Charles Lister, Visiting Fellow, Brookings Doha Center, Foreign Policy Program: Through 2014 (and particularly post-June), ISIS has more or less abided by a step-by-step approach of encouraging its enemies (local, regional and international) to take steps down a long slippery slope—whereby ISIS’ own apparent unpredictable advances have induced a short-termist reactiveness amongst its opponents, which it has been keen to present as a process towards adopting unplanned escalation and the risky investment of existentially valuable resources.

The Roots of the Islamic State's Appeal. France's False Choice. The impressive and inspiring show of solidarity at France’s unity march on January 11—which brought together millions of people and more than 40 world leaders—was not necessarily a sign of good things to come. “We are all one” was indeed a powerful message, but what did it really mean, underneath the noble sentiment and the liberal faith that all people are essentially good and want the same things, regardless of religion or culture?

Even if the scope is limited to Western liberals, the aftermath of the assaults in Paris on Charlie Hebdo and a kosher supermarket has revealed a striking lack of consensus on a whole host of issues, including the limits of free speech, the treatment of religions versus racial groups, and the centrality of secularism to the liberal idea. Turns out, we are not all one. French schoolteachers were reportedly dumbfounded that (some) Muslim students refused to stand up for a moment of silence after the attacks. How Islamist rebels engineered Israel’s oil grab in Syria.

A US oil company is preparing to drill for oil in the Golan Heights. Granted the license in February 2013 by Israel, Afek Oil and Gas is a subsidiary of Genie Energy Ltd., whose equity-holding board members include former US Vice President Dick Cheney, controversial media mogul Rupert Murdoch, and financier Lord Jacob Rothschild. Also on the board is Brigadier General Effie Eitam, a former Israeli minister for infrastructure who currently resides in the Golan Heights himself.

How Come India Isn’t Speaking Out Against the Islamic State? When President Barack Obama visited New Delhi this week as a guest of Indian Prime Minister Narendra Modi, mentions of the global fight against the Islamic State were notably absent. The only hat tip to cooperation is buried deep into a U.S. -India joint statement released on Sunday, where the two leaders “reaffirmed their deep concern over the continued threat posed by transnational terrorism,” including groups such as al Qaeda and the Islamic State.

The White House says India could play a role battling the Islamic State, according to a Reuters report. And yet at least publicly, top Indian leaders have said almost nothing about fighting the rampant terrorist group in Syria and Iraq. So why has India been so quiet? For one, India has huge stakes in the Middle East — but in very different ways from the United States. An estimated seven million Indians reside in the Middle East, overwhelmingly concentrated in the Gulf, where they tend to be guest workers.

Beth A. Simmons for Democracy Journal: What’s Right with Human Rights. Issue #35, Winter 2015 Beth A. Hilfe, die Russen kommen. Ein altes neues Feindbild und seine politischen Auswirkungen Dr. Frederic Wehrey and Wolfram Lacher. While much of the world’s attention has been fixated on the Islamic State of Iraq and al-Sham (ISIS), Libya has been tearing itself asunder. Its airports lie in smoking ruins, foreign diplomats have fled, and its once outspoken civil society has been cowed through a spate of assassinations. Libya’s chaos has been variously portrayed as a contest between Islamists versus more secular factions; between younger “revolutionaries” versus older technocrats and military officers of Muammar al-Qaddafi’s regime; or between two rival towns in the west, Misrata and Zintan.

Libya’s conflict is all these things. At its core, however, the fighting is about two centers of power -- consisting of town-, tribe-, and militia-based networks -- vying for the mantle of legitimacy in a country devoid of any workable institutions. And therein lies the conundrum. There are now two governments in Libya. Sklaven und Sklaverei: Leibeigene in Thailand schuften auf Schiffen. DER SPIEGEL/Michael Meißner Als Phirun am Strand erwacht, stehen Männer und Frauen um ihn herum und reden auf ihn ein. The case against human rights. In July 2013, Amarildo de Souza, a bricklayer living in a Rio de Janeiro favela, was arrested by police in an operation to round up drug traffickers.

He was never seen again. De Souza’s disappearance was taken up by protesters in street demonstrations, which were met with a ruthless police response. Normally, de Souza’s story would have ended there, but public pressure led to a police investigation, and eventually to the arrest of 10 police officers, who were charged with torturing and murdering him. Nicholas Sambanis and Jonah Schulhofer-Wohl. Earlier this year, Iraq’s parliament approved a new power-sharing government led by Prime Minister Haidar al-Abadi. The move toward political inclusion was encouraging, especially as Iraqi forces continued to battle the militants of the Islamic State of Iraq and al-Sham (ISIS). For weeks, though, two key cabinet positions—Minister of Defense and Minister of the Interior—remained unfilled.