It Takes How Much Water to Grow an Almond?! California, supplier of nearly half of all US fruits, veggies, and nuts, is on track to experience the driest year in the past half millennium. 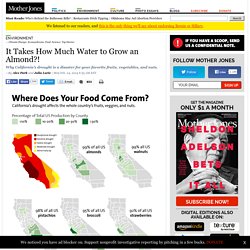 Farms use about 80 percent of the state's "developed water," or water that's moved from its natural source to other areas via pipes and aqueducts. As the maps above show, much of California's agriculture is concentrated in the parts of the state that the drought has hit the hardest. For example: Monterey County, which is currently enduring an "exceptional drought," according to the US Drought Monitor, grew nearly half of America's lettuce and broccoli in 2012.

When it comes to water use, not all plants are created equal. Here's how much water some of California's major crops require: In addition to farms, the drought affects municipal water supplies. Lettuce is ‘three times worse than bacon' for emissions and vegetarian diets could be bad for environment. Eating a healthier diet rich in fruit and vegetables could actually be more harmful to the environment than consuming some meat, a US study has claimed. 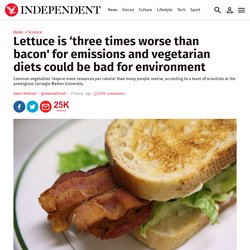 Lettuce is “over three times worse in greenhouse gas emissions than eating bacon”, according to researchers from the Carnegie Mellon University who analysed the impact per calorie of different foods in terms of energy cost, water use and emissions. Published in the Environment Systems and Decisions journal, the study goes against the grain of recent calls for humans to quit eating meat to curb climate change.

Researchers did not argue against the idea people should be eating less meat, or the fact that livestock contributes to an enormous proportion of global emissions – up to 51 per cent according to some studies. The experts examined how growing, processing and transporting food; sales and service; and household storage and use all take a toll on the environment for different foods. The top 14 superfoods that will help you live to 100. Nervous eaters. Rather than being organised into starters and mains, the menu at Palate restaurant in Melbourne is separated into six proteins and 15 vegetables. 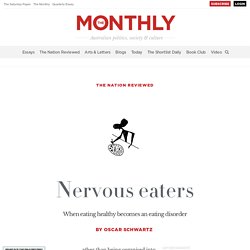 Ivy Thompson beckons the waiter. “I’ll have the herbed chicken breast,” she says, “and the grilled tomato, smashed avocado, sweet potato mash and sautéed spinach.” Palate launched its Paleo menu in 2011, the same year Thompson started her Paleo diet. “I was 29 and had just had my third child in three years. I wasn’t happy with my weight, and I was suffering from chronic illnesses.” Thompson came to her new eating regime via the blog Mark’s Daily Apple. Thompson gave up all carbs and started her own blog, Paleo in Melbourne.

After a year of strict Paleo, Thompson noticed that she had put on weight around her stomach, but nowhere else. Dietary restrictions left Thompson physically depleted, and eventually caused severe adrenal deficiency. “There is a difference between a healthy-eating subculture and a psychological illness within it. Nutrition Landscape Information System: Nutrition Landscape Information System (NLIS) Country Profile. Close/Dismiss Window To enable mothers to establish and sustain exclusive breastfeeding for 6 months, WHO and UNICEF recommend: · initiation of breastfeeding within the first hour of life; · exclusive breastfeeding, i.e. only breast milk with no additional food or drink, not even water; · breastfeeding on demand, as often the child wants, day and night; and · no use of bottles, teats or pacifiers. 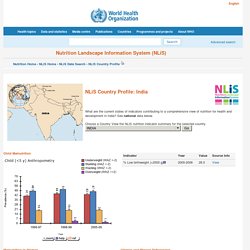 The recommendations for feeding infants and young children (6-23 months) include: · continuing breastfeeding; · introduction of solid, semisolid or soft foods at 6 months; · appropriate food diversity (at least four food groups per day); · appropriate frequency of meals: two to three times a day between 6 and 8 months, increasing to three to four times a day between 9 and 23 months with nutritious snacks offered once or twice a day, as desired; · safe preparation of foods; and · feeding infants in response to their cues. Early initiation of breastfeeding What does this indicator tell us? How is it defined? Sustainability of meat-based and plant-based diets and the environment. © 2003 American Society for Clinical Nutrition Abstract Worldwide, an estimated 2 billion people live primarily on a meat-based diet, while an estimated 4 billion live primarily on a plant-based diet. 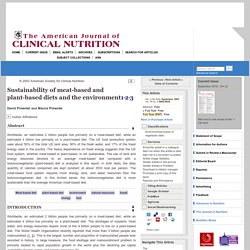 The US food production system uses about 50% of the total US land area, 80% of the fresh water, and 17% of the fossil energy used in the country. The heavy dependence on fossil energy suggests that the US food system, whether meat-based or plant-based, is not sustainable. The use of land and energy resources devoted to an average meat-based diet compared with a lactoovovegetarian (plant-based) diet is analyzed in this report. Worldwide, an estimated 2 billion people live primarily on a meat-based diet, while an estimated 4 billion live primarily on a plant-based diet. Like the world population, the US population continues to grow rapidly.

Projection of US population growth in the next 70 y (4). About 124 kg of meat is eaten per American per year (6). Footnotes.