The Top 5 Healthiest Seeds. I previously posted my list of different types of nuts that are healthy and nutritious. 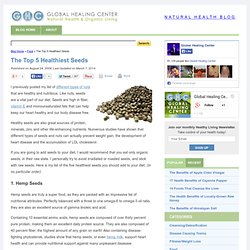 Like nuts, seeds are a vital part of our diet. Seeds are high in fiber, vitamin E and monounsaturated fats that can help keep our heart healthy and our body disease free. Healthy seeds are also great sources of protein, minerals, zinc and other life-enhancing nutrients. Numerous studies have shown that different types of seeds and nuts can actually prevent weight gain, the development of heart disease and the accumulation of LDL cholesterol.

If you are going to add seeds to your diet, I would recommend that you eat only organic seeds, in their raw state. 1. Hemp seeds are truly a super food, as they are packed with an impressive list of nutritional attributes. Herbs. About the Urban Homestead project. In the mid-1980s, our family set out to do the seemingly impossible: To create a new revolution in sustainable urban living. 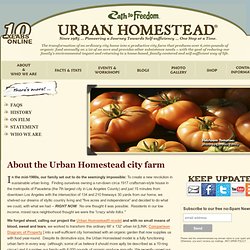 Finding ourselves owning a run-down circa 1917 craftsman-style house in the metropolis of Pasadena (the 7th largest city in Los Angeles County) and just 15 minutes from downtown Los Angeles with the intersection of 134 and 210 freeways 30 yards from our home, we shelved our dreams of idyllic country living and "five acres and independence" and decided to do what we could, with what we had -- RIGHT NOW. No one thought it was possible. Residents in our low income, mixed race neighborhood thought we were the "crazy white folks. " Permaculture Principles. How to Grow Garlic: Organic Gardening. Soil preparation: Garlic will tolerate some shade but prefers full sun. 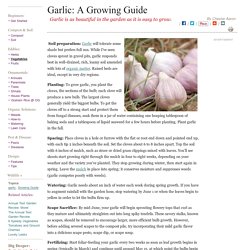 While I've seen cloves sprout in gravel pits, garlic responds best in well-drained, rich, loamy soil amended with lots of organic matter. Raised beds are ideal, except in very dry regions. Planting: To grow garlic, you plant the cloves, the sections of the bulb; each clove will produce a new bulb. The largest cloves generally yield the biggest bulbs. To get the cloves off to a strong start and protect them from fungal diseases, soak them in a jar of water containing one heaping tablespoon of baking soda and a tablespoon of liquid seaweed for a few hours before planting.

Spacing: Place cloves in a hole or furrow with the flat or root end down and pointed end up, with each tip 2 inches beneath the soil. Watering: Garlic needs about an inch of water each week during spring growth. When your garlic is thoroughly dry, trim the roots, taking care not to knock off the outer skin. How to: create a Planting Calendar, Allsun style. I must say that while I’m finding this market garden experiment very exciting, it’s also rather daunting. 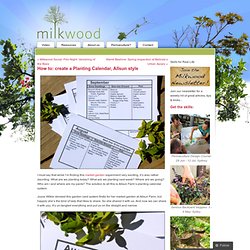 What are we planting today? What are we planting next week? Where are we going? Who am i and where are my pants? The solution to all this is Allsun Farm’s planting calendar system. Joyce Wilkie devised this garden card system firstly for her market garden at Allsun Farm, but happily she’s the kind of lady that likes to share. The Allsun Farm planting calendar system works in a simple but powerful way: Each month has a designated card. 5 Secrets to a ‘No-work’ Garden. It took over 20 years of gardening to realize that I didn’t have to work so hard to achieve a fruitful harvest. 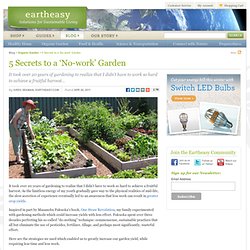 As the limitless energy of my youth gradually gave way to the physical realities of mid-life, the slow accretion of experience eventually led to an awareness that less work can result in greater crop yields. Inspired in part by Masanobu Fukuoka’s book, One Straw Revolution, my family experimented with gardening methods which could increase yields with less effort.

Fukuoka spent over three decades perfecting his so-called “do-nothing” technique: commonsense, sustainable practices that all but eliminate the use of pesticides, fertilizer, tillage, and perhaps most significantly, wasteful effort. Open Source Farming. Permaculture & Gardening. Our.windowfarms.org. OSCAR - Open Source Simple Computer for Agriculture in Rural Areas. Our main sources of inspiration for this project. 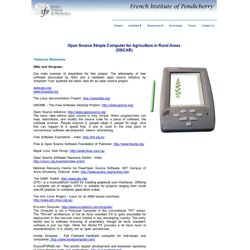 The philosophy of free software advocated by GNU and a hardware open source initiative by Simputer Trust sparked the basic idea for an open source project. www.gnu.org www.simputer.org The Linux documentation Project: GNOME - The Free Software Desktop Project: Open Source Initiative: The basic idea behind open source is very simple: When programmers can read, redistribute, and modify the source code for a piece of software, the software evolves. 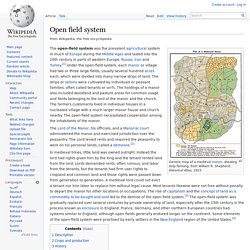 Shepherd, Historical Atlas, 1923 The open-field system was the prevalent agricultural system in much of Europe during the Middle Ages and lasted into the 20th century in parts of western Europe, Russia, Iran and Turkey.[1] Under the open-field system, each manor or village had two or three large fields, usually several hundred acres each, which were divided into many narrow strips of land. The strips or selions were cultivated by individuals or peasant families, often called tenants or serfs. The holdings of a manor also included woodland and pasture areas for common usage and fields belonging to the lord of the manor and the church.