Meandering eats: Pasta e Fagioli: On Stubbornness. I am incredibly lazy about soup. 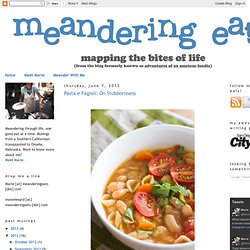 It's not a difficult dish to make, but I often end up obsessing about the nuances. It's not just a hot bowl of liquid, but flavors that need to be tweaked and balanced. With my obsessive need for perfection in soup, borne from a lifetime of my mother's perfect broths, I've given up. Last week, I arrived home from a fabulously fun dinner and my throat felt a little scratchy. I chalked it up to too much wine and too little water and went to bed. 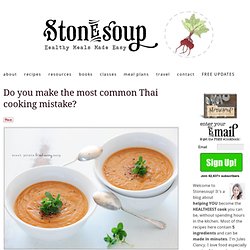 I was instantly captivated by the warm, smiling people but the thing that really won my heart, of course, was the food. I had eaten plenty of Thai in Australia and was already a fan of the cuisine. But eating Thai in Thailand gave me a much deeper appreciation. Over the years I’ve gone through many Thai cooking phases but it’s been a while since I really got into cooking Thai. Which is a shame. So when my students voted for the May class at the Stonesoup Virtual Cookery School to focus on Healthy Thai Cooking, I was super excited for an excuse to get back into Thai. So what is the most common Thai cooking mistake? In my house at least, the biggest mistake is thinking that Thai cooking is going to take a lot of effort and time. 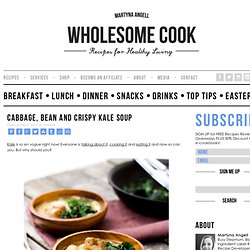 Everyone is talking about it, cooking it and eating it and now so can you. But why should you? Because, in a nutshell, it is very high in beta carotene, vitamin K, vitamin C, lutein, zeaxanthin, and reasonably rich in calcium. Kale also contains sulforaphane (particularly when chopped or minced), a chemical with potent anti-cancer properties and it is said to help the body in a natural detocification process. Boiling decreases the level of sulforaphane; however, steaming, microwaving, or stir frying do not result in significant loss. Those are just some of kale’s health benefits, but what about the flavour and texture?

There is a definite nuttiness to the leaves which remain meaty when steamed, but turn beautifully crisp when stir fired in butter or good quality oil. Chipotle Chicken Tortilla Soup. So it’s been quite the roller coaster these past 24 hours. 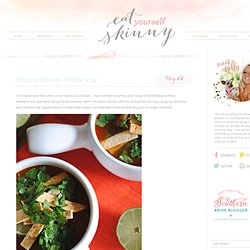 I had intended on writing a fun recap of the fabulous birthday weekend I had spent with all my friends, however when I received a phone call from my Dad this morning saying my Grandma was rushed to the hospital due to a sudden heart attack, my mind went blank and this blog post no longer mattered. Nothing mattered to be honest. If anyone knows me, they know how incredibly close I am with my Grandma, in fact she’s the whole reason I developed this strong passion for cooking. Not to mention she’s wildly young for her age, still working every day with barely a wrinkle. Curried Yam & Red Lentil Soup - Shrinking Kitchen : Shrinking Kitchen.

This story is not meant to turn you off to this soup. 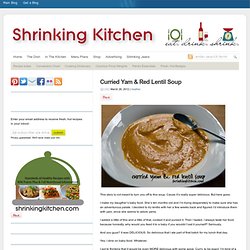 Cause it’s really super delicious. But here goes: I make my daugther’s baby food. She’s ten months old and I’m trying desperately to make sure she has an adventurous palate. I decided to try lentils with her a few weeks back and figured I’d introduce them with yam, since she seems to adore yams. I added a little of this and a little of that, cooked it and pureed it. And you guys? Yes, I dine on baby food. I got to thinking that it would be even MORE delicious with some spice. Add more or less curry to your liking. 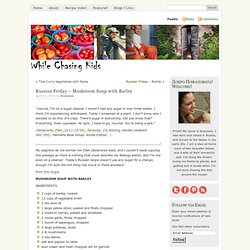 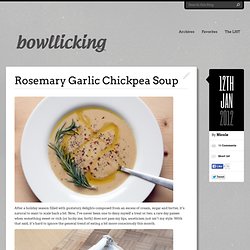 Now, I’ve never been one to deny myself a treat or two; a rare day passes when something sweet or rich (or lucky me, both) does not pass my lips, asceticism just isn’t my style. With that said, it’s hard to ignore the general trend of eating a bit more consciously this month. I briefly contemplated a cleanse, realized that was a bit extreme, and would most likely result in cranky Nicole (sugar makes me sweet!) Soup seemed a natural place to start, few foods seem to pack in more flavor and virtue per bite. Traditional Greek Bean Soup. Ingredients 300g white beans 1 big onion (chopped) 2 carrots (sliced) 2/3 of a cup choped celery olive oil (5-6 tablespoons)

For the Love of Food: Creamy Mushroom Soup. This mushroom soup is a creamy low fat meal that’s still loaded with flavor! 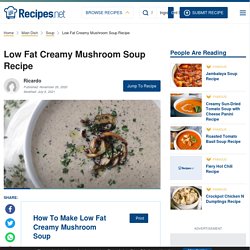 It’s packed with a variety of mushrooms for a more delectable side. Preparation: 10 minutes Cooking: 20 minutes Total: 30 minutes Ingredients 3tbspflour4cupswater4tspBetter than Bouillon Chicken,or 2 chicken bouillon cubes5ozshiitake mushrooms,sliced8ozbaby bella mushrooms,sliced1celery1tbsplight butter,optional Instructions Place cold water and flour in a blender, then blend until smooth. Nutrition. Russian Friday – Vegetarian Borscht « While Chasing Kids. April 6, 2012 by Anastasia This beet soup would probably be one of the first items that pops up if you google “Russian cuisine”. 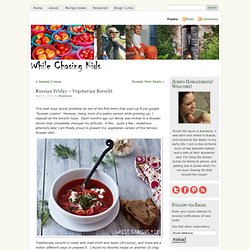 However, being more of a pastry person while growing up, I skipped all the borscht hype. Eight months ago our family was invited to a Russian dinner that completely changed my attitude. A few… quite a few.. disastrous attempts later I am finally proud to present my vegetarian version of this famous Russian dish. Traditionally borscht is made with beef broth and beets (of course), and there are a million different ways to prepare it. Corn & Cheese Chowder.

Last week, I whipped up three yummy soups, all perfect for Halloween night and all guaranteed to: 1. 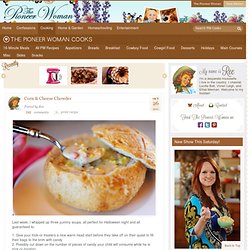 Give your trick-or-treaters a nice warm head start before they take off on their quest to fill their bags to the brim with candy 2. Possibly cut down on the number of pieces of candy your child will consume while he is trick-or-treating 3. Its Friday It Must Be Soup! March 3 Indian Style Yellow Split Pea Soup with Spinach. Bake Your Day » Buffalo Chicken Soup with Orzo. Friday, March 2, 2012. Baked Tortilla Chicken Over Brown Rice and Cheesy Broth.

Tortellini Soup with Chunky Tomatoes and Spinach. Creamy Tomato and Basil Soup with a Rosemary Boule. I’ve been feeling like having soup with some crusty, steamy-when-you-break-it-open bread. Today, I made just that. Chipotle Pumpkin Chili. I made this pumpkin chili on Halloween. It was a nice dinner to warm up to after being out for the evening trick-or-treating with my son, he was Mater from Cars. This year I made my pumpkin chili with lots of chipotle pepper goodness. It was very smoky and delicious. To give it less heat and more smoky flavor, I stripped the seeds out of the chipotle peppers. If you want more heat, just leave the seeds of the chipotle peppers in them. Thai Corn Chowder. Pasta e Ceci Soup. Once Upon A Time: Enchantingly inspired recipes. Who Needs A Prince When You Have Food? When I was a little girl, I would close my eyes and wish that the fairy tales my mother told me before bed would come true.

I'd wish that a prince on a giant white stallion would rescue me from my second floor bedroom and whisk me away into a magical forest. Although I've grown up some, the idea of living in a modern day fairy tale, like Emma Swan in ABC's Once Upon a Time, is very enticing. Since the probability of me being rescued from corporate America by a tall, dark and handsome prince is quite low, I'll create my own wonderland with these fairy tale foods!

Whether your fairy tales are more Happily Ever After or have a darker edge like those in NBC's haunting new series Grimm, try one of these recipes for a magical meal that will take your taste buds to an enchanting new world. Bewitching Kitchen. Roasted Squash and Cauliflower Soup. Roasted Tomato Zucchini Soup. Buffalo Chicken Chowder. Creamy Sweet Potato and Chipotle Soup. Chicken Soup Noodles. Remember when I made these cheesy chicken noodles? That dish actually started out as this one, but sometimes I get distracted by cheese. Chili, with a Spanish Flair. Black Bean and Pasta Soup with Spinach. Strawberries are at its best when they're about to go bad. Their sweetness intensifies, their flavor is much stronger and their texture changes. Slow Cooker Chicken Enchilada Soup. Chili Cornbread Cobbler  (No Ratings Yet) Red Curry, Coconut milk and Rice Noodle Thai Soup.