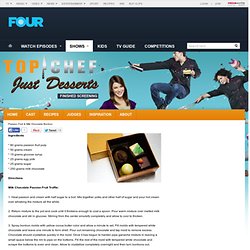 Heat passion and cream with half sugar to a boil. Mix together yolks and other half of sugar and pour hot cream over whisking the mixture all the while. 2. 3. Al Brown. Highest Rated Recipes collection. Jamie Oliver. Recipes from Jamie Oliver, Gordon Ramsay and more top chefs. Top Chef Dishes. Recipes and Inspiration from the UK's Best Chefs - Great British Chefs - Great British Chefs. 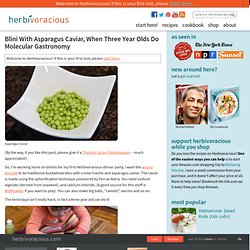 If this is your first visit, please start here. Asparagus Caviar (By the way, if you like this post, please give it a Thumbs Up on Stumbleupon – much appreciated!) So, I’m working more on dishes for my first Herbivoracious dinner party. I want the amuse bouche to be traditional buckwheat blini with creme fraiche and asparagus caviar. The technique isn’t really hard, in fact a three year old can do it!

When Kids Do Molecular Gastronomy in Their Jammies … ok, well, maybe a 3 year old can’t make perfect little caviar pearls, but believe me she can have good fun trying! I wasn’t totally happy with the asparagus balls because I really wanted them to be clear, but these came out opaque. (Enjoying this post? The basic schtick is: Puree whatever you want to spherify, and strain as needed. To do worms, put the syringe under water and squeeze. I tested the blini and creme fraiche separately, and just to have the asparagus taste in the mix I roasted one little tip. 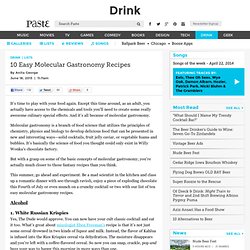 Except this time around, as an adult, you actually have access to the chemicals and tools you’ll need to create some really awesome culinary special effects. A beginner's guide to molecular gastronomy. Modernist Recipes - Modernist Cooking Made Easy. Molecular gastronomy in your own kitchen. Richard squeezes restructured soup on to a plate with a syringe. 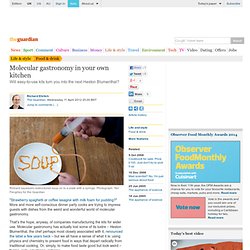 Photograph: Teri Pengilley for the Guardian "Strawberry spaghetti or coffee lasagne with milk foam for pudding? " More and more self-conscious dinner party cooks are trying to impress guests with dishes from the weird and wonderful world of molecular gastronomy. That's the hope, anyway, of companies manufacturing the kits for wider use. Molecular gastronomy has actually lost some of its lustre – Heston Blumenthal, the chef perhaps most closely associated with it, renounced the label a few years back – but we all have a sense of what it is: using physics and chemistry to present food in ways that depart radically from traditional cooking. I enlisted my science-graduate daughter Alice to test two kits: the Cuisine R-Evolution set (sales of which Lakeland's marketing director, Tony Preedy, says have "far exceeded expectations") for £44.99, and Cuisine Innovation, retailing online for £32.99. 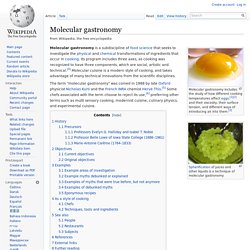 Its program includes three axes, as cooking was recognized to have three components, which are social, artistic and technical.[4] Molecular cuisine is a modern style of cooking, and takes advantage of many technical innovations from the scientific disciplines. The term "molecular gastronomy" was coined in 1988 by late Oxford physicist Nicholas Kurti and the French INRA chemist Hervé This.[5] Some chefs associated with the term choose to reject its use,[6] preferring other terms such as multi sensory cooking, modernist cuisine, culinary physics, and experimental cuisine. 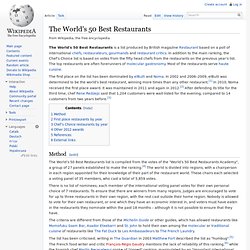 These chairs each selected a voting panel of 35 members, who cast a total of 5,859 votes. There is no list of nominees; each member of the international voting panel votes for their own personal choice of 7 restaurants. To ensure that there are winners from many regions, judges are encouraged to vote for up to three restaurants in their own region, with the rest cast outside their home region.

Nobody is allowed to vote for their own restaurant, or one which they have an economic interest in, and voters must have eaten in the restaurants they nominate within the past 18 months – although it is not possible to ensure that they have. The World’s 50 Best Restaurants. Best Chefs in the World - Bios of the Worlds Best Chefs.

Marco Pierre White to Heston Blumenthal: The ten greatest chefs by Raymond Blanc. By Raymond Blanc UPDATED: 21:43 GMT, 9 July 2011 From the trailblazer who put rock 'n' roll into food - to the caretaker of British gastronomy, here RAYMOND BLANC picks his favourite chefs of all time Antonin Careme's creation included piece montées or croquemboche, that towering cake of profiteroles (left); Auguste Escoffier (right) opened the restaurants at the Savoy Hotel (right) in London The first great chef of modern cuisine, Careme was rightly known as 'the cook of kings and the king of cooks'. 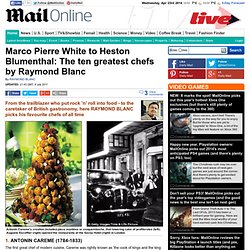 The young Careme earned his keep in a Parisian chophouse and went on to open a patisserie where his creations included piece montées or croquembouche, that towering cake of profiteroles devoured at every French celebration. Auguste Escoffier was a chef and inventor who frequently cooked extravagant dinners for the elite but who thought of the poor, too. Oh, how I wish I'd known Soyer.