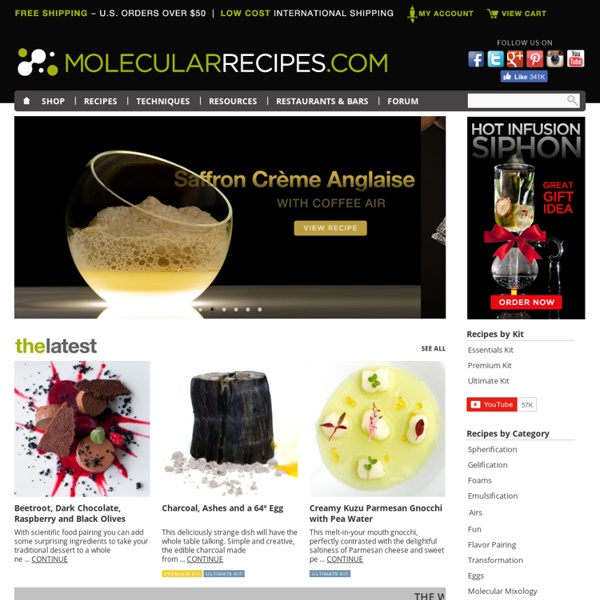 Oyster with Sea Gel and Aromas The creative presentation of this dish will give you a complete sensory experience. Chef Eneko Atxa of Azurmendi has perfected the art of bottling scents in order to add the ... CONTINUE Carrot, Coffee, Coconut and Oranges Coffee is a fine and versatile product that pairs perfectly with savory foods and this recipe, inspired by the scientific method of food pairing, combines it with carrots, coconut and orange. ...

How Burgers and Fries Are Killing Your Microbial Balance For the microbiologist Justin Sonnenburg, that career-defining moment—the discovery that changed the trajectory of his research, inspiring him to study how diet and native microbes shape our risk for disease—came from a village in the African hinterlands. A group of Italian microbiologists had compared the intestinal microbes of young villagers in Burkina Faso with those of children in Florence, Italy. The villagers, who subsisted on a diet of mostly millet and sorghum, harbored far more microbial diversity than the Florentines, who ate a variant of the refined, Western diet. Where the Florentine microbial community was adapted to protein, fats, and simple sugars, the Burkina Faso microbiome was oriented toward degrading the complex plant carbohydrates we call fiber. “It was the most different human microbiota composition we’d ever seen,” Sonnenburg told me. Earlier this year I visited Sonnenburg at Stanford University, where he has a lab.

Scott's Pizza Chronicles: Why I Love the International Pizza Expo A typical scene at Pizza Expo. [Photographs: Scott Wiener] The response is common when I tell someone I'm heading to Las Vegas for the International Pizza Expo. Chocolate Sprinkles Much has been made of the restaurant industry’s dark underbelly rife with drugs and alcohol, but little about the darkest addiction of them all: chocolate sprinkles. Those in the pastry department find themselves at an especially high risk for developing a dependency on jimmies, aka chocolate vitamins and will “take” them on everything from buttered bread to ice cream, cupcakes and sugar cookies. If you don’t leave now, you may soon find yourself doing lines of chocolate in the kitchen too.

Recipes - Restaurant Girl: Best Food Blog & Restaurant Guide Wild Mushroom Stew Stew is a generally a great go-to for home cooks during winter —simply throw bits of meat from the freezer and odds and ends from the fridge into an oversized pot, and forget about them for hours at a time. But the best thing about this stew is that it will actually appeal to vegetarians (and non-vegetarians!) alike, made with a hearty mix of cultivated and wild mushrooms, chewy ribbons of kale, and nutty brown rice or barley. Read More The Food Lab: The Science of the Best Chocolate Chip Cookies [Photographs: J. Kenji Lopez-Alt] "Stop making cookies." Vegetative Uncertainty » mangolandia Humans! In India when speaking of our dead, the people say “she left the body” rather than “she died”. That is, there is a deep clarity — for me our subconscious patterns of speech reveal deeply the structure of how we think — about what death is, or as it has sometimes occurred to me, “the unreality of death”. Krishna and Jesus are both pretty into this idea – “For the soul there is neither birth nor death at any time.

The French Pastry School Chef Kanjiro Mochizuki, Executive Pastry Chef at The Imperial Hotel in Japan, will be coming to The French Pastry School to teach a four-day, hands-on course that will result in adding new flavors and craftsmanship to your dessert menu. Chef Mochizuki’s skill and expertise in pastry is world-renowned. Add to your repertoire by learning his techniques and methods and make Japanese- and French-style pastries that are not frequently found on other menus or in pastry cases. Recipes may include: Bamboo Bavarian Cream Chocolate Pound Cake Dorayaki Daifuku Mochi Gâteau d’Orange Japanese Black Sugar Cookie Japanese Strawberry Soft Roll Cake Japanese Style Desserts Madeleine Most Popular Japanese Cake Chef’s Specialty Savarin Special Pound Cake Wasabi Dessert White Bean Youkan All of the products you make will be yours to take home to enjoy with your family, friends, and colleagues!

Organic farming, carefully done, can be efficient - latimes Organic agriculture generally comes at a cost of smaller harvests compared with conventional agriculture, but that gap can be narrowed with careful selection of crop type, growing conditions and management techniques, according a new study. Organic farming has been touted by supporters as a more environmentally sustainable method of farming that's better for consumers because crops contain fewer man-made chemicals. But without the high-nitrogen fertilizers and pesticides often employed in conventional agriculture, it's also less efficient. "The organic-versus-conventional debate is very emotional, very heated, and it's not really informed sufficiently by scientific evidence," said Verena Seufert, a geographer at McGill University in Montreal and lead author of the study published online Wednesday by the journal Nature. Overall, the team found that yields from organic farming in developed countries were 20% lower than when farmers used conventional methods. amina.khan@latimes.com

12 Santa-Approved Christmas Cookie Recipes Vegetarians are forever coming up with ways to replace meat in delicious and creative ways. Not only have they attacked meatballs, but they’ve put some successful spins on meaty classics that most believed to be impossible. Due to their heartiness, vegetarians often turn to tofu, tempeh, and legumes like chickpeas in order to fill up and feel good. There are, however, some veggies out there that are meat-y enough to step up to the plate. The mushroom is one of them, and we’ve got 19 dinner recipes that will sate your hunger on Meatless Monday. 1.

Cute Christmas Cookies It is time to think about cute Christmas cookies again. What makes a cookie cute? Hare are some of the answers -- animals, color, Christmas-themed, simplicity in idea, winter, stars, snowflakes. Because they are so cute, they are fun to make and share. Becoming a vegetarian Avoiding meat is only one part of the picture. A healthy vegetarian diet should be chock-full of foods with known benefits. People become vegetarians for many reasons, including health, religious convictions, concerns about animal welfare or the use of antibiotics and hormones in livestock, or a desire to eat in a way that avoids excessive use of environmental resources.