"The Internet of Things revolves around increased machine-to-machine communication; it’s built on cloud computing and networks of data-gathering sensors; it’s mobile, virtual, and instantaneous connection; and they say it’s going to make everything in our lives from streetlights to seaports “smart. 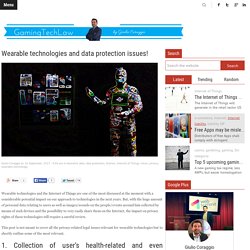 But, with the huge amount of personal data relating to users as well as images/sounds on the people/events around him collected by means of such devices and the possibility to very easily share them on the Internet, the impact on privacy rights of these technologies will require a careful review. This post is not meant to cover all the privacy-related legal issues relevant for wearable technologies but to shortly outline some of the most relevant. 1. 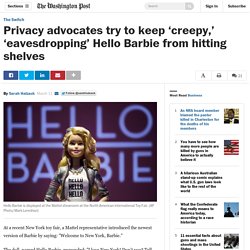 (AP Photo/Mark Lennihan) At a recent New York toy fair, a Mattel representative introduced the newest version of Barbie by saying: "Welcome to New York, Barbie. " The doll, named Hello Barbie, responded: "I love New York! Don't you? Tell me, what's your favorite part about the city? To revive the sinking sales of its flagship brand, Mattel is bringing Barbie to life with voice-recognition software that will allow the doll to "listen" to children speak and give chatty responses. This WiFi-connected Barbie may soon be a hit among children used to tinkering with iPads, but children's privacy advocates are crying foul.

Hello Barbie works by recording a child's voice with an embedded microphone that is triggered by pressing a button on the doll. The doll is expected to hit store shelves in the fall, and ToyTalk says it is still developing its privacy policy. By Sarah Halzack March 12. 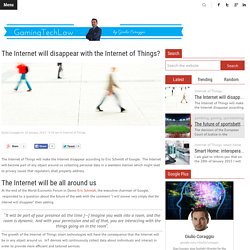 Giulio Coraggio on 26 January, 2015 - 8:38 am in Internet of Things The Internet of Things will make the Internet disappear according to Eric Schmidt of Google. The Internet will become part of any object around us collecting personal data in a seemless manner which might lead to privacy issues that regulators shall properly address. Will Privacy Be Part of the IoT Standards Battle? The free flow of information is an exciting prospect, especially as we navigate into the wide-open world of the Internet of Things (IoT). 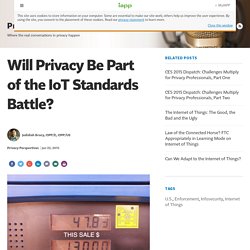 I love that I can easily hook up the latest activity tracker with my smartphone and immediately log calories burned and time slept. But that’s nothing. We’ve featured a number of dispatches from the Consumer Electronics Show (CES) looking at what a new generation of connected technology will bring for privacy pros, the Personal Privacy Marketplace and, yes, drones. And though privacy is making it into many of these products, “it’s not something you’re seeing in marketing messages alongside the size of screens or the speed of processors,” my colleague Sam Pfeifle writes. The underlying technological factor, here though, is the protocols dictating how all of these connected devices communicate with one another. But an important question remains: How is privacy being considered as these protocols develop? 3 reasons why the Internet of Things (still) doesn’t make sense. Yoon Boo-Keun, president and co-chief executive officer of Samsung, speaks at a news conference during CES in Las Vegas. 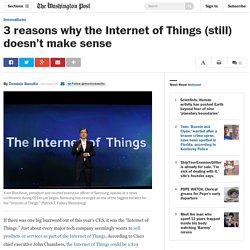 Samsung has emerged as one of the biggest backers for the “Internet of Things.” (Patrick T. Fallon/Bloomberg) The Government Reveals Its 3 Biggest Concerns About The Internet of Things (CSCO, INTC) Intel's AIM Suite can identify gender and approximate age of consumers. 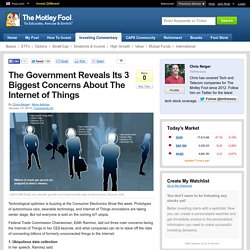 Source: Intel. Technological optimism is buzzing at the Consumer Electronics Show this week. Prototypes of autonomous cars, wearable technology, and Internet of Things innovations are taking center stage. But not everyone is sold on the coming IoT utopia. Federal Trade Commission Chairwoman, Edith Ramirez, laid out three main concerns facing the Internet of Things in her CES keynote, and what companies can do to stave off the risks of connecting billions of formerly unconnected things to the Internet. 1.

Internet of You: Users Become Part of the City-as-a-System. While new wearable technologies such as Google Glass and FitBit have recently captured media and consumer attention, they’re really just the vanguard of a larger story — wearables’ potential for making cities smarter through connecting systems, analyzing collected data and making policy decisions based on the results. 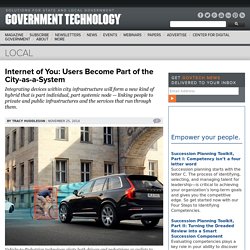 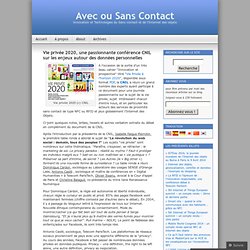 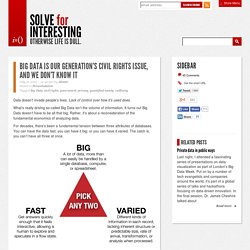 Lack of control over how it’s used does. What’s really driving so-called Big Data isn’t the volume of information. It turns out Big Data doesn’t have to be all that big. How Big Data Became So Big - Unboxed. Big Data Security Or SIEM Buzzword Parity? If you attended the 2012 RSA Security Conference, BSides San Francisco, or the America’s Growth Capital Summit, you no doubt noticed claims of SIEM vendors jumping on the 'big data security' bandwagon I doubt I could find anyone who would argue that there wasn't a wealth of security-pertinent data made available by the various deployed technical controls and corresponding user actions in an enterprise environment. 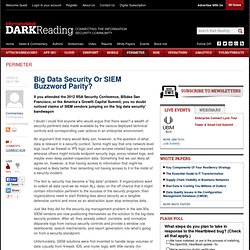 An argument that many would likely join, however, is the question of what data is relevant in a security context. Some might say that only network-level logs (such as firewall or IPS logs) and user-access-related logs are required, whereas others might include endpoint security logs, proxy-related logs, and maybe even deep packet inspection data. Something that we can likely all agree on, however, is that having access to information that might be required is likely better than lamenting not having access to it in the midst of a security incident.

The big data battle: How HP can help your business win the war - IT Pro White Paper Library. Internet of Things: Future Cities Lab CEO, City Innovation Group founder discuss art installations and projects using sensors. Uk.businessinsider. BI Intelligence The Internet of Things (IoT) has been called the next Industrial Revolution — it will change the way all businesses, governments, and consumers interact with the physical world. For more than two years, BI Intelligence has closely tracked the growth of the IoT. Specifically, we've analyzed how the IoT ecosystem enables entities (i.e. consumers, businesses, and governments) to connect to, and control, their IoT devices in 16 environments, including manufacturing, the connected home, transportation, and agriculture. In a new report from BI Intelligence, we discuss all of the components of the IoT ecosystem, including its devices, analytics, networks, and security.

We also provide estimates and forecasts on the burgeoning IoT market, including device growth, amount invested, and potential return on investment. Here are some key points from the report: In total, we project there will be 34 billion devices connected to the internet by 2020, up from 10 billion in 2015. PS. The Internet of Things Is Far Bigger Than Anyone Realizes. Little sensors, big impact: CardioMEMs sensors are implanted using minimally invasive techniques. intelfreepress/Flickr When people talk about “the next big thing,” they’re never thinking big enough.

10 enterprise Internet of Things deployments with actual results. Much of the media focus on IoT has been on connected devices like smart appliances, wearable devices, and other novelties. However, at Cisco’s Internet of Things World Forum in Chicago last month, a number of complex deployments that have transformed cities or businesses were highlighted. Here are 10 of the more interesting deployments. BC Hydro, British Columbia, Canada Smart Meter and Clean Energy Program. Setting Standards for the Internet of Things. Fifteen years ago, one of the first major initiatives in the Internet of Things took place. In 1999, the Auto-ID Center was formed at MIT; it later became the Auto-ID Labs, a global consortium of researchers and practitioners. The goal of both organizations was to research and help implement radio-frequency identification devices (RFID). That same year also marked the first recorded use of the Internet of Things (IoT) term by an Auto-ID co-director.

(While the concept of connected things goes back at least two decades, to our knowledge it was Kevin Ashton, a co-founder of the MIT Auto-ID Center, who first used the appealing IoT term in 1999.) RFID was arguably the first major IoT technology of any scale. One of us, Sanjay, was a co-director of the Labs and their MIT predecessor from the beginning, and worked with a variety of consumer packaged goods (CPG) and retail firms to employ RFID devices in supply chain processes. What Worked Well with RFID.

But when it comes to sheer connections and mass adoption of the Internet of Things, China is leading the way. For those keeping up the Internet of Things (IoT), this may not be much of a surprise, but China's lead is only getting bigger. Connecting things like never beforeAccording to a report released by GSMA over the summer, 27% of all global machine-to-machine (M2M) connections are in China, while all of Europe has 29% and the US has 19%. China is using M2M connections to manage smart cities. From fast fashion to wearable technology – the pro’s and con’s of today’s lic... Moschino’s inspired use of one of the world’s best known fast-food brands in its 2014 Autumn/Winter Collection has been a run-away success, with handbags, iPhone cases, sweaters and backpacks already sold out.

Some critics have accused Moschino of mocking the working class, who could not afford to buy luxury products but far from damaging the reputation of either brand, the successful tie-up has enhanced both brands, giving McDonalds the opportunity to gain status and credibility with a different group of customers and increasing brand recognition for Moschino. So, what is the key to successful brand licensing and collaborations in the fashion industry and what can go wrong? Historically, brand licensing has been used by the fashion industry as an easy way to target a new audience and expand into new categories and geographies. Page. The ‘Internet of Things’, Part 2: top 7 recommendations from EU privacy regul...

Our last post looked at 10 personal data protection and privacy challenges arising from the growing ‘Internet of Things’ (“IoT”) that the Article 29 Working Party (“WP”) identified in its recent Opinion. The internet of things is here, but the rules to run it are not. Internet of Things will transform life, but experts fear for privacy and personal data. Click photo to enlarge. The Internet of Things Has Arrived — And So Have Massive Security Issues. Photo: Jim Merithew/Wired. Top 5 IoT insights from the Web Summit. Fordham Report 2014: Fair Use and Freedom of Speech.